The Most Impressive Bridges Around the World

While bridges are usually put in place for the purpose of practicality and convenience, many bridges have become landmarks in their own right. With award-winning designs, forward-thinking architecture and some of the most stunning backdrops imaginable, these are the most impressive bridges around the world. 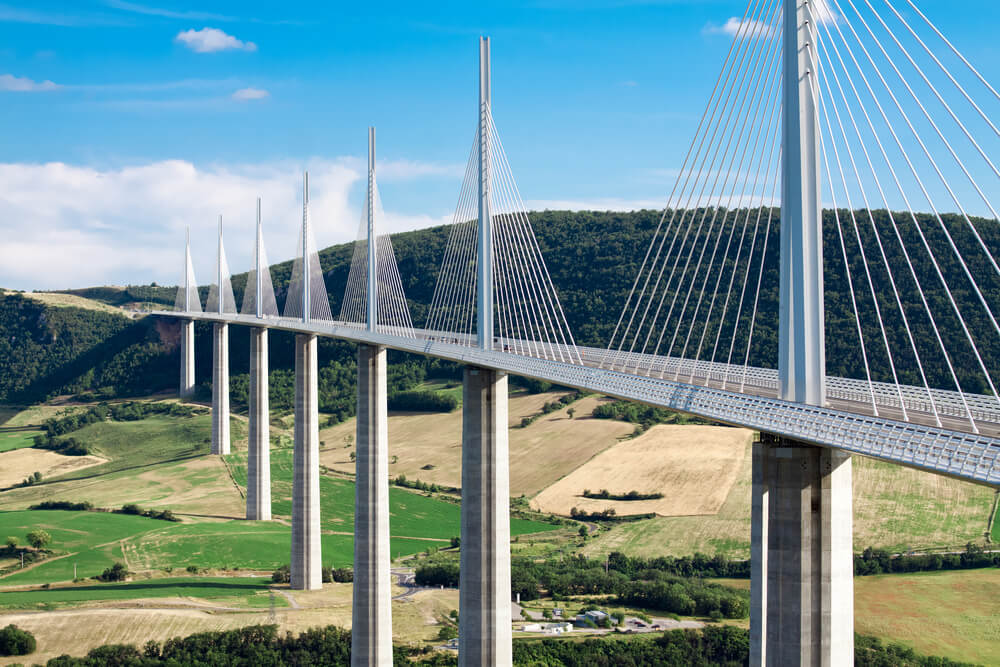 Ever wondered about the tallest bridge in the world?

You’ll find this in France over the River Tarn, not too far away from Millau.

How tall is the bridge?

It is 343 meters tall, making it even taller than the Eiffel Tower. In terms of length, the Millau Viaduct stretches out for 2460 meters, and only touches the floor of the Tarn Valley in nine spots.

So, what makes the Millau Viaduct so impressive?

Its design for starters. It almost looks like a massive yacht with the way in which it thinly curves over the river, with just seven slender pillars holding it up.

Want to see the Millau Viaduct close up?

There are a few ways in which you can do this:

Unfortunately, there isn’t a public footpath over the bridge, so walking isn’t allowed. The only exception to this is one day in May, when the bridge is open to pedestrians (and closed to road traffic) for the marathon.

There are also a few viewpoints that offer up some gorgeous views of the bridge. The best spot is Brocuejouls, where you will also find a tourism information center. The area itself is designated a cultural and natural heritage site, and is also famous for its gastronomy, making it the perfect place to head to for the day.

Let’s take a look at the longest bridge in the world – the Danyang-Kunshan Grand Bridge in China.

Wondering how long the bridge actually is?

It stretches out for just over 102 miles, and opened to the public in June 2011.

It must have taken several years for such a long bridge to be built!

Well, you’ll probably be surprised to know that the bridge was created in just four years. Of course, the fact that China had a workforce of around 10,000 people helped with this, with the total cost of the bridge amounting to $8.5 billion.

Why was the bridge built in the first place?

To link the cities of Danyang and Kushan, but it also connects several other towns and cities to each other, including:

The Beijing-Shanghai High Speed Railway also uses this bridge as a part of its route, making public transportation so much more convenient for locals. For example, the journey from Ningbo to Jiaxing used to take four and a half hours. Now, with the bridge in place, it takes just two.

The majority of the bridge crosses over land, with this terrain being incredibly varied. From lowland rice paddies to the Yangcheng Lake, the views from this bridge are definitely diverse!

As you can imagine, this bridge attracts so many tourists each year, especially since it holds a current record in the Guinness Book of World Records. 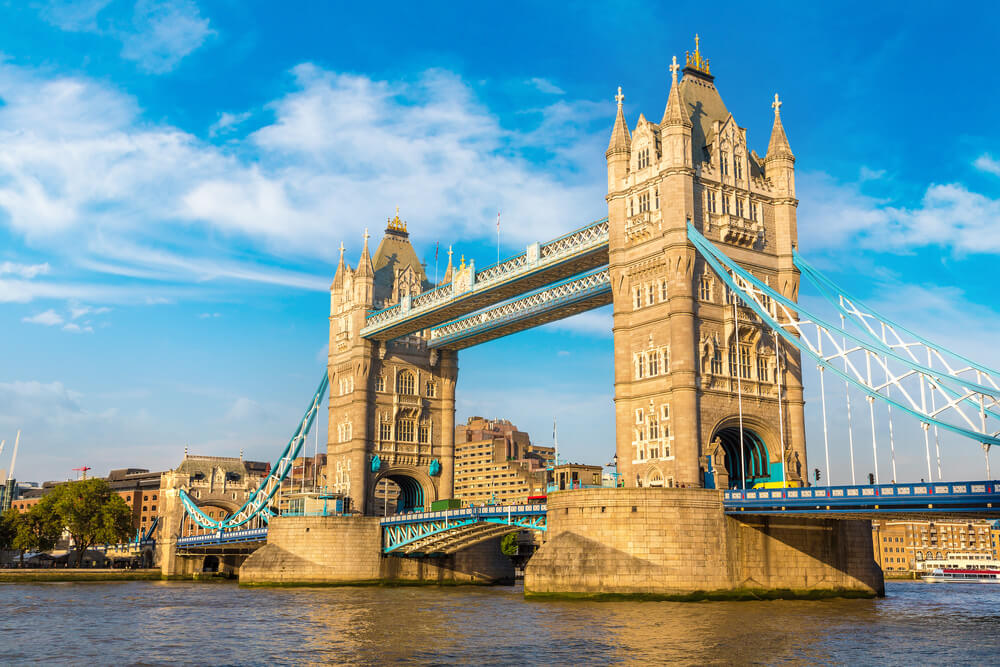 One of the most famous landmarks in London, Tower Bridge was built between 1886 and 1894. It crosses over the River Thames, connecting the borough of Tower Hamlets with Southwark.

Tower Bridge is one of the busiest bridges in the world, carrying over 40,000 people each and every day.

The bridge features fabulous Victorian architecture, with two dramatic bridge towers connected by two walkways. While most bridges are designed in a single style, Tower Bridge features elements of both bascule and suspenion bridge designs.

So, other than its dramatic architecture, what makes Tower Bridge so special?

The fact that the bridge’s central span rises up when large ships need to pass underneath. These bascules are raised over 1000 times a year, although any boats wanting to pass through need to provide at least 24 hours notice.

Wondering how long it takes for the bridge to open and close?

It takes juwst over a minute for the bascules to rise up. Once any boats or ships have passed through, it then takes about the same amount of time for the bridge to close back up. 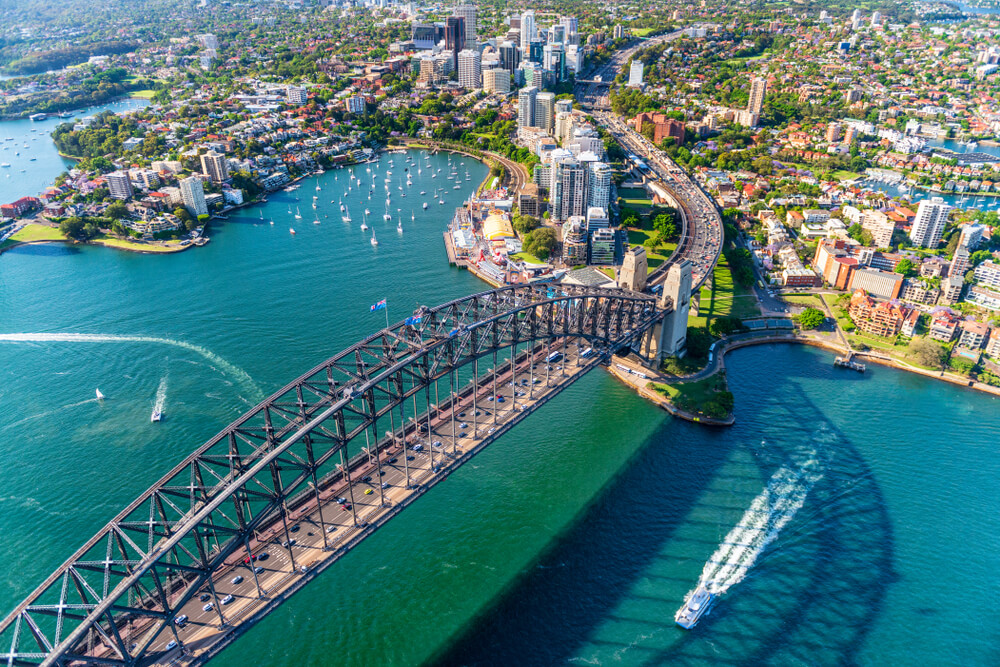 One of Australia’s most iconic landmarks, the Sydney Harbor Bridge connects Sydney’s North Shore with the city’s central business district, crossing over the Sydney Harbor. This bridge is much-loved by the residents of Sydney, with it fondly being referred to as the Coathanger, due to its unusual shape.

Locals were wanting a bridge put in place since 1815, but it took about 100 years before this actually happened. It was only after World War I that planning really began, and, since the bridge was being built at the same time as Sydney’s underground railway system, they were able to incorporate railway lines into the bridge too.

The bridge was designed to be able to withstand the strong heat that Sydney experiences during the summer months. Its large hinges absorb any expansion that the sun causes, enabling the bridge to stand strong no matter the weather.

Wondering what Sydney Harbor Bridge is made from?

It is built out of steel, featuring six million rivets that were hand-driven. In fact, this is the largest steel arch bridge in the world!

As you can imagine, crossing over the bridge will provide you with some truly picturesque views of the Sydney Harbor. However, if you want something even more spectacular, you also have the option of climbing Sydney Harbor Bridge.

This is done at the bridge’s South Eastern Pylon, with this being an adventure that is only recommended for people who are physically fit. This is because the activity consists of a long walk to the base of the pylon, and then another 200 steps to reach the top.

However, once you do reach the top, the views really are worthwhile, so make sure that you don’t forget your camera! You will also find an informational display at the top, explaining more about how the bridge was built. 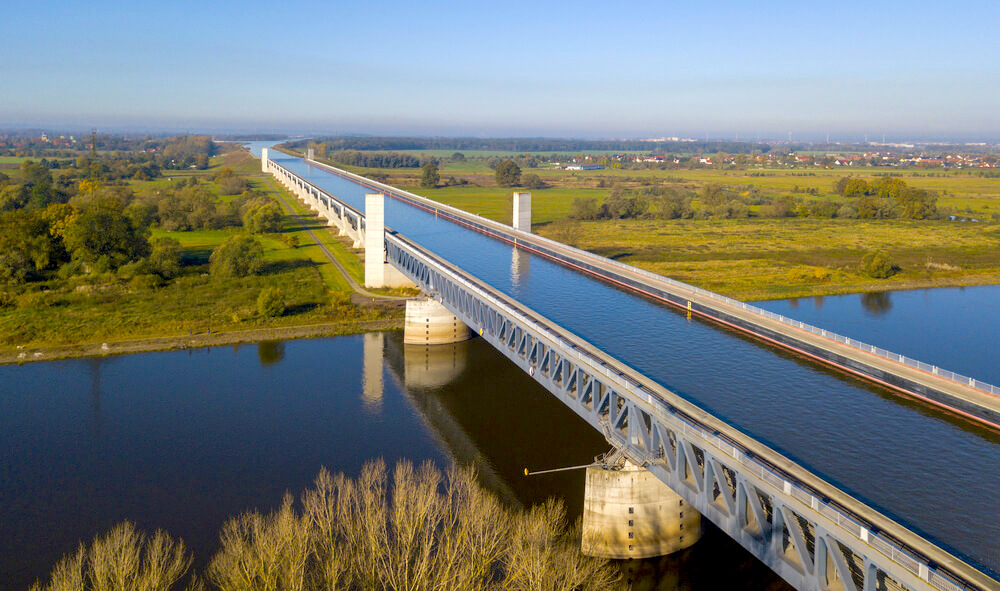 Have you ever seen a water bridge?

There aren’t that many of them around, but Magdeburg in Germany is home to a beautiful example of a water bridge. Magdeburg itself is the capital of the German state of Saxony-Anhalt, making it quite a popular tourism destination.

What exactly is a water bridge?

They’re basically large aqueducts that are used to connect two waterways, so that boats and ships can easily cross over. In the case of the Magdeburg Water Bridge, the bridge connects the Mittelland Canal with the Elbe-Havel Canal, saving ships a 12 kilometer detour that is quite awkward to navigate.

Want to know how long this water bridge is?

It stretches out for just over 3000 feet, making it the longest water bridge in Europe.

If you want to see this water bridge for yourself…

It would definitely be a worthwhile experience, not only to see the bridge but also to see the Elbe – the last unspoilt, free-flowing river in Germany. You can either head to Magdeburg and check out the water bridge from the banks of one of the canals, or you could book yourself in for a canal cruise and travel over the bridge yourself. 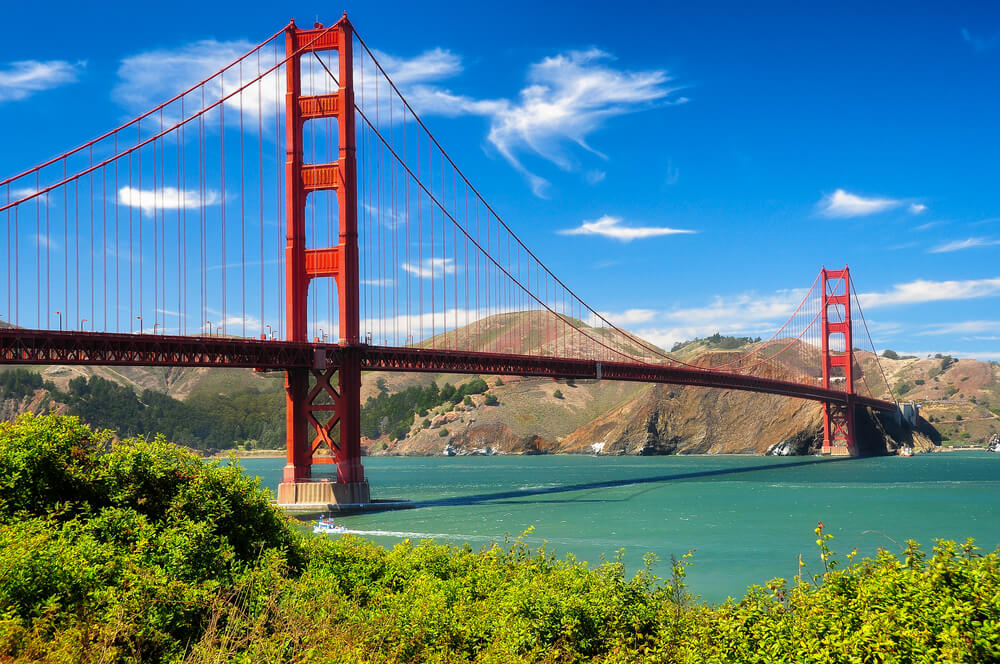 San Francisco‘s Golden Gate Bridge is one of the most iconic bridges in the world.

It was opened to the public in 1937, but design and construction of the bridge wasn’t a smooth journey…

In 1930, when the bridge was still being designed, there were 2300 lawsuits against it.

Fortunately, these lawsuits were overruled, and construction of the bridge was allowed to continue.

When it came to the actual construction, this was a dangerous job. For every one million dollars that was spent, it was estimated that one man was killed. In order to protect the workers, the safety rules became very strict. The workers were required to:

A large net was also installed underneath the bridge, at a cost of $130,000. This not only helped to speed construction up, but also saved 19 workers who would have otherwise fallen into the water beneath.

Wondering why the Golden Gate Bridge was painted in such a striking orange shade?

Well, there were quite a few different colors proposed for the bridge, ranging from carbon gray to black with yellow stripes (which the Navy were in favor of for better visibility).

However, the architects involved were not keen on these ideas, as they wouldn’t properly showcase the design and details of the bridge. In the end, they settled on International Orange.

This may seem like an unusual color to you, and it definitely is quite a different color to go for in the world of architecture and engineering. However, the color enables the bridge to properly stand out from both the sea as well as the sky, and also blends in well with the natural beauty all around. As an added bonus, International Orange can also be seen quite easily on foggy days, which San Francisco experiences quite a few of. 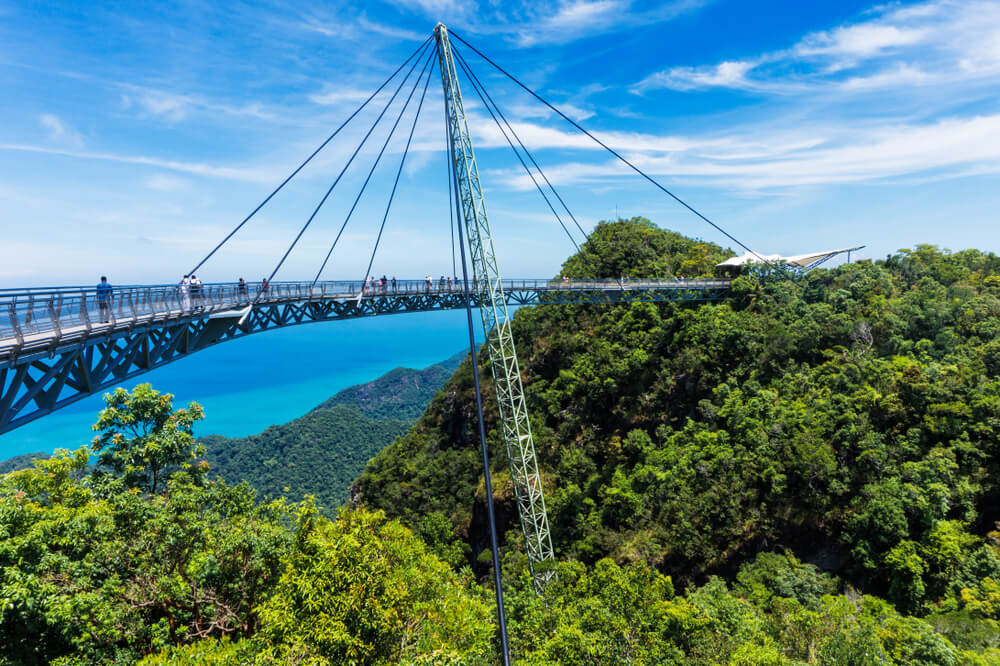 Located in Langkawi, the Langkawi Sky Bridge is a curved pedestrian bridge that stretches out for 125 meters. It stands 660 meters above sea level, providing some extraordinary views of the landscape around.

This is another record-breaking bridge, famous for being the longest free span and curved bridge in the world.

Because the bridge underwent a serious upgrade, with the following features being added in:

Yes, to get to the bridge, you need to take the Langkawi Cable Car. After this, you can then either take the SkyGlide to the bridge, or you can walk along a mountain track to reach the bridge. While the walk is scenic and only takes about 15 minutes, it is very steep, so is only recommended for those who are physically fit.

Want to know why the bridge was designed with such a prominent curve to it?

Because this makes the viewing experience even more impressive. Rather than a straight bridge, on which you would always be able to see the other end, a curved bridge gives you unique views over the landscape around you, including the dense virgin Malaysian rainforests.

Do you have to pay to visit the bridge?

Yes, you do, but ticket prices are very affordable. However, if you visit during peak times, you may be in for a bit of a wait, since the bridge can only hold 200 people at one time.

There are so many bridges around the world that are famous for their design, architecture, function and incredible beauty. From the iconic Golden Gate Bridge in San Francisco to the extraordinarily long Danyang-Kunshan Bridge in China, these are all bridges that are definitely worth a visit.