San Francisco hasn’t had it easy over the years…

From the major earthquake of 1906 to a number of subsequent fires that have taken place since then, almost 80% of the original San Francisco has been destroyed.

While this may be the case, there are still plenty of historic pockets around San Francisco where you can learn more about the Golden City’s past. 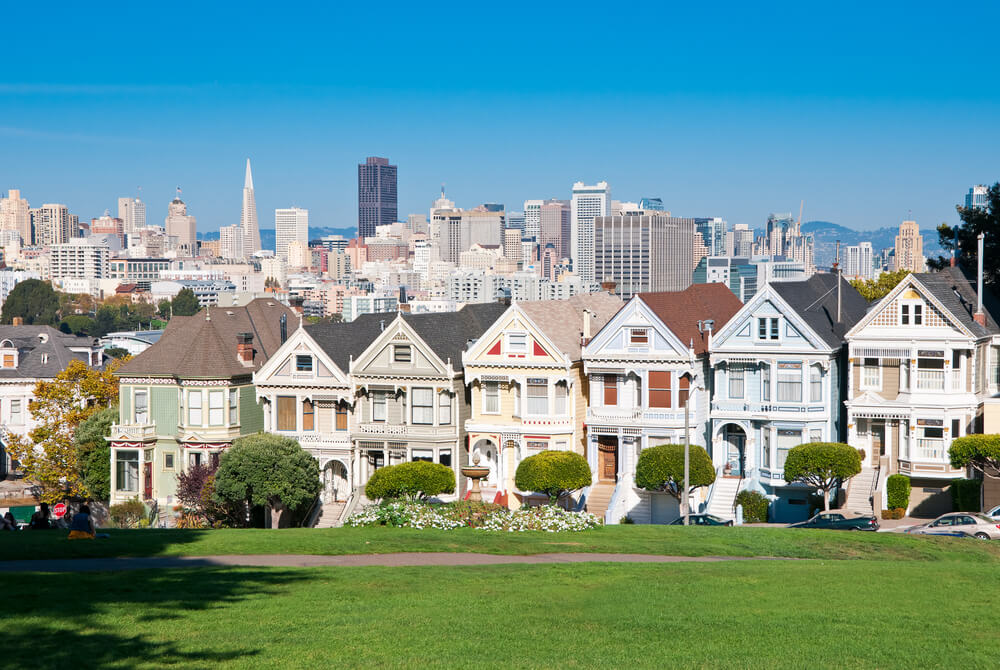 One of San Francisco’s most iconic areas, Alamo Square is often referred to as Postcard Row.

Because of the exquisite Victorian architecture that can be seen here. While all of the buildings do have that distinct Victorian vibe to them, they were all designed by different architects, meaning that each one is unique in its own way.

Where about in the Alamo Square Historic District should you go to first?

Head on over to Steiner Street, where you will find the Painted Ladies. This is a group of colorful houses that were build in the 1890’s, and each feature a different colored coat of paint. These houses have appeared in so many different films, television shows and adverts over the years (from Full House to Dirty Harry), as they are such a fantastic visual that shows what San Francisco used to be like.

While it may excite you to see some of these famous houses, don’t forget that many of them still serve as residential properties. You will need to remain respectful of their owners – don’t go traipsing onto their land, no matter how much you may want to snap the perfect photo.

A few other architectural must-visits include:

Once you’re done checking out the architecture, stop off at the Alamo Square Park. This is the focal point of the neighborhood, and while it used to be a watering spot for traveling horses, it is now a beautiful, green public park.

There are plenty of incredible eateries in this neighborhood. Give the Alamo Square Seafood Grill a try for some local seafood dishes, or head to Little Star Pizza for what many would say is the tastiest pizza in the city.

Give Chateau Tivoli a try. This restored house was originally built in 1892, and is now a stunning bed and breakfast. There are a few other accommodation options in the area, but keep in mind that you will not find any large hotel chains here.

Often referred to as Little Italy, San Francisco’s North Beach neighborhood is most revered for its delectable Italian cuisine.

As you walk the streets here, you will notice a number of Italian restaurants packed along narrow cobbled streets, with outdoor tables to offer up an authentic al fresco experience.

A few different features, such as:

As you can see, there is plenty to do here.

North Beach is also home to a couple of museums worth checking out. The North Beach Museum will teach you even more about the neighborhood’s past, while the unique Lyle Tuttle’s Tattoo Museum is dedicated to a world-famous tattoo artist from the 1960s.

Located between Fillmore, Webster, Sutter and Bush Streets, Cottage Row consists of a line of quaint 19th century Victorian cottages. Although this district is only a couple of blocks from Japantown, Cottage Row exudes the air of the peaceful English countryside, making it a spot well worth checking out.

The best place to take all of this in is from the Cottage Row Mini Park.

The park runs adjacent to the Cottage Row houses, giving you the perfect view of their unique design and architecture.

The houses themselves have been listed on the National Register of Historic Places, and it is very rare to see any of them being remodeled in any way.

Although this is a very small neighborhood, the community within it is so tight-knit. This is just another part of Cottage Row’s charm, with the majority of the residents here being good friends with each other.

You may also catch a glimpse into the backyards of the houses along Cottage Row. These may be small, but have actually played an important role in the neighborhood’s past.

Back in the 1930’s, Cottage Row used to be home to a large population of Japanese Americans. This is why the street used to be known as Japan Street. During the war, the residents here used to grow food in their small back gardens, selling these at an open market that was held along Cottage Row every Saturday. 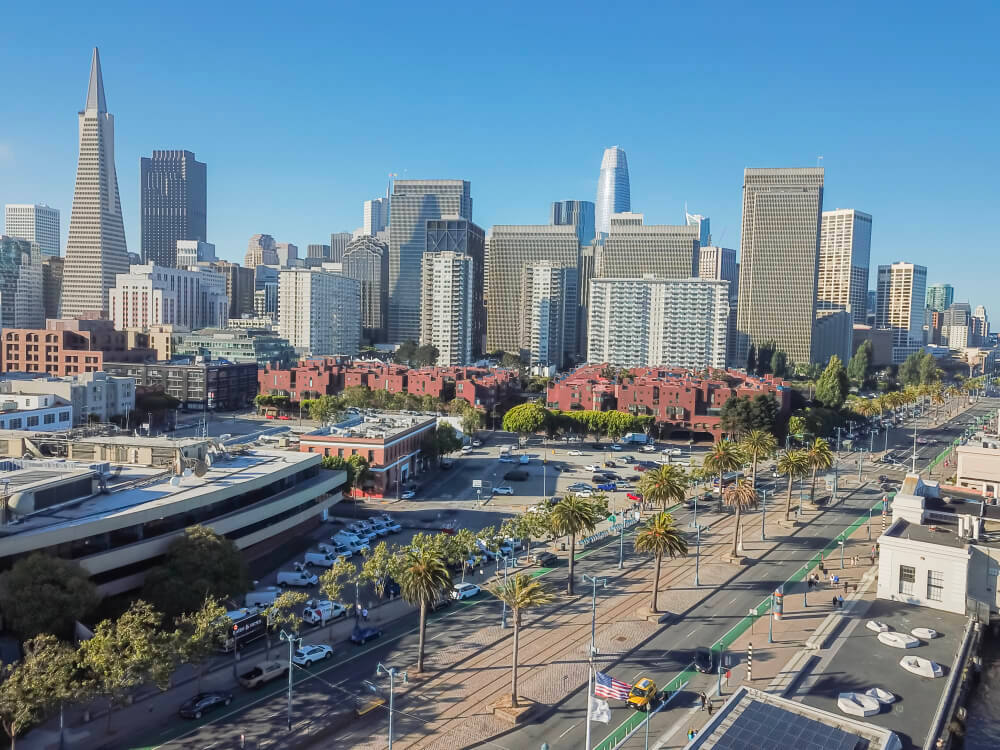 Pretty much all of the remaining commercial buildings from the 1850s and the 1860s can be found in Jackson Square. During the days of early San Francisco, this was the city’s central business district, due to its convenient waterfront location.

If you’ve ever been to San Francisco and Jackson Square, you’re probably thinking…

Jackson Square isn’t by the water!

It may not be now, but it definitely used to be. This is where the east shoreline of the city used to end, somewhere around where Battery Street is today. This is why Jackson Square, along with a small portion of the North Beach neighborhood, used to be known as the Barbary Coast. Sailors would disembark from their ships here, with this part of the city always abuzz with life.

Wondering why Jackson Square isn’t by the water any more?

Because the city was extended out over filled ground. In fact, a significant amount of that filled ground was actually created from the hulls of the ships that were abandoned when sailors were rushing to the area’s gold fields.

What about the rest of the architecture at Jackson Square?

Unfortunately, many of the neighborhood’s original buildings were destroyed in the earthquake and fire of 1906. However, they were rebuilt quite soon after, in a style that mimicked the originals. This means that they do still retain quite a historic appeal.

What else will you find in Jackson Square today?

This part of town is much quieter now than it used to be. The majority of the stores here specialize in antiques, arts and home furnishings, and you will also find a couple of bars and restaurants here too. 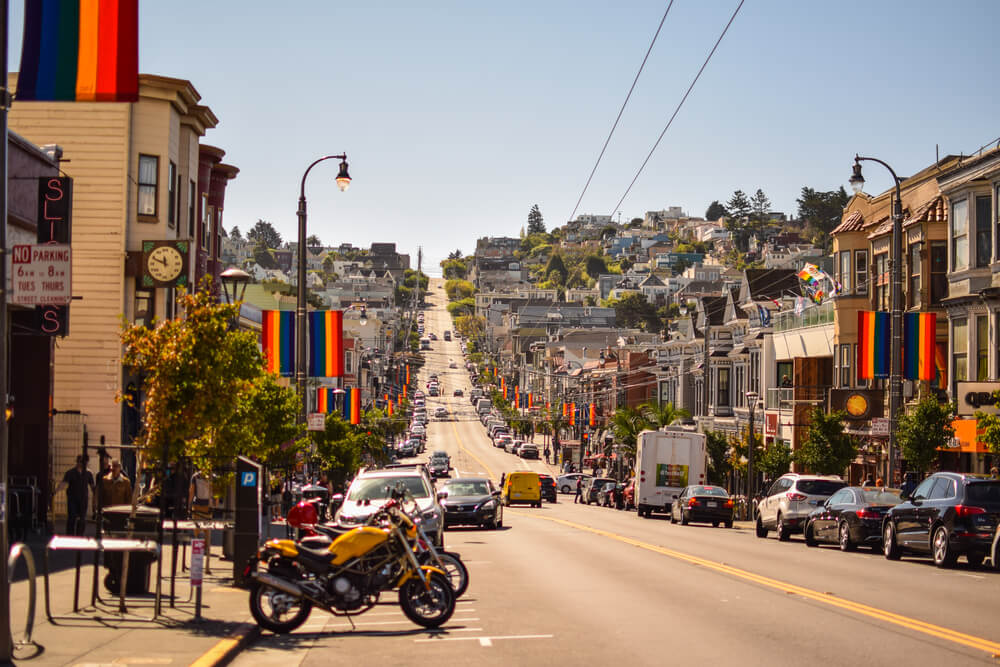 To begin with, the Castro District used to primarily be an Irish working class neighborhood. Its nickname was Eureka Valley.

However, this all changed during the Second World War.

A number of soldiers formed homosexual relationships in the area, which was fuelled by the eruption of Beat Culture in the 1950s.

Hundreds of gay organizations were established here, which has now led to the area being known as Gay Mecca.

Want to learn more about the Castro District’s LGBTQ history?

Take a stroll along the Rainbow Honor Walk. It stretches out for a few blocks (although it is still growing), and has bronzed pavement plaques to honor a variety of notable individuals who have made some sort of improvement to the LGBTQ community, whether this may be in San Francisco, the USA, or around the world.

Of course, the LGBTQ community has faced numerous struggles, and still do. An example of this was all of the homosexual men in Europe that were murdered by the Nazis. The granite pylons at the Pink Triangle Memorial Park honor these men, reminding the community of how much they have overcome.

Running from Pier 7 to Pier 35, which is pretty much between Jackson Street and Kearny Street, the Northeast Waterfront district is quite a lively, urban neighborhood.

In the past, this area was filled with warehouses. These were built continuously over the years, meaning that you will find warehouses from just about every decade located here.

While the buildings may vary greatly in age, it wasn’t until recently that warehouses began to be designed with style in mind. This means that many of the buildings here look the same as they would have done in the 19th century, when the Northeast Waterfront was known as the warehouse District.

Wondering what the buildings are used for now?

Many of them still function as warehouses, but you will also find a number of offices and shops here too.

The waterfront itself features a promenade lined with swaying palm trees, along with a light rail transportation system to help people to easily get around.

As you walk down the waterfront, you will come across several metal pylons that stand about 14 feet tall. These feature quotes, stories and photographs in honor of the heroic sailors and engineers that have helped to push the city forward. 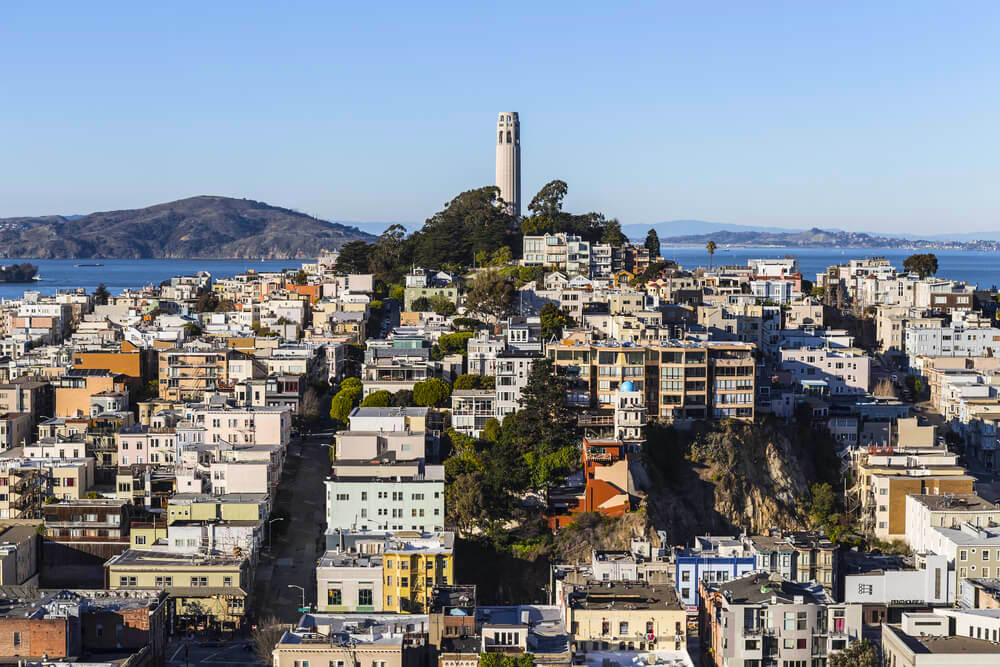 San Francisco is home to 44 hills, with Telegraph Hill being one of them.

How did this hill get its name?

Because it is home to a semaphore, which is a structure that looks similar to a windmill, but designed to inform the city about the nature of the ships that were entering into the Golden Gate. By finding out in advance what sort of cargo the ships were carrying, everyone from merchants to wholesalers to financiers were able to adjust local prices for those goods.

Unfortunately, the semaphore became useless once the electrical telegraph was invented in 1862, but the hill still kept its name.

What happened to Telegraph Hill after that?

Well, in the 1920s, it became quite a popular destination among the creatives of San Francisco, attracting poets, artists and more.

While it still retains some of that bohemian vibe today, it is now mostly a residential neighborhood. Although it joins on to the North Beach neighborhood, Telegraph Hill is much quieter and greener.

Do you love wildlife?

Keep an eye out for the parakeets that live around Telegraph Hill. There is quite a large population of these parrots established here, and their cheerful song will likely accompany you as you explore this historic neighborhood.

San Francisco is home to so much history and heritage, and its eight official historic districts are the perfect places to explore to learn more about this. Whether you choose to check out the architecture around Alamo Square, or the LGBQT scene in the Castro district, the fact that each neighborhood is so wonderfully varied is the perfect example of the cultural melting pot that San Francisco has become.