Haven’t yet decided where you’re going to be spending New Year’s Eve?

Here are 10 cities in the USA that will guarantee you a great time.

No New Year’s Eve list would be complete without a mention of New York City, with the Big Apple being one of the most popular New Year’s Eve destinations in the world.

What exactly happens at Times Square on New Year’s Eve?

Well, people tend to start early in order to bag the best spot, with revellers beginning to make an appearance in the morning of the 31st. As the evening goes on, party favors, from hats to noise-makers, are handed out to the crowd, while Christmas concerts and shows keep everyone entertained. 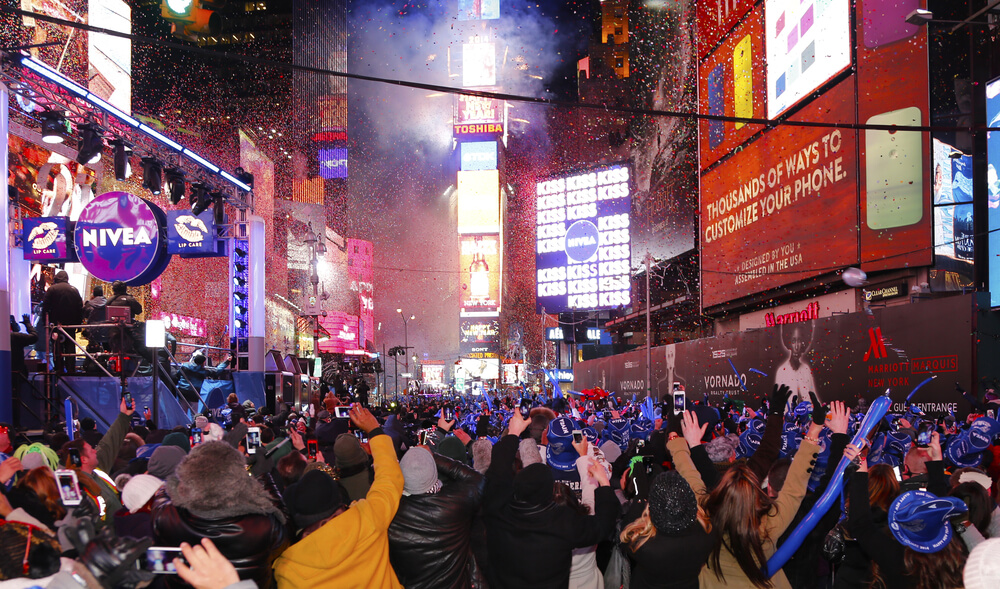 The famous Ball is raised and lit by 6pm, after which it begins its slow descent. The official countdown starts a minute before midnight, and then, when the Ball drops, the celebrations really begin.

There are plenty of other ways in which you can bring in the new year in New York City. From parties at bars to cruises that give you a spectacular view of the harbor, New York City comes to life more than ever on New Year’s Eve.

Parties in Las Vegas are pretty crazy no matter the time of year, so you can only imagine the intensity of the festivities that take place here on New Year’s Eve.

The entire Las Vegas Strip is closed to traffic for the night, with the whole road turning into a massive street party.

Close to half a million people attend each year, all decked out in party clothes and holding plenty of party favors.

The casinos along the Strip join forces and launch a fantastically choreographed fireworks spectacle, which many would say is one of the best in the country.

Of course, there are also plenty of clubs, casinos, hotels, restaurants and more in Vegas where you can ring in the new year, giving you so much to choose from.

The celebrations take place at Navy Pier, with attractions available for all ages. The fun-filled night culminates with a fantastic fireworks show at midnight, which is synchronized to live music. 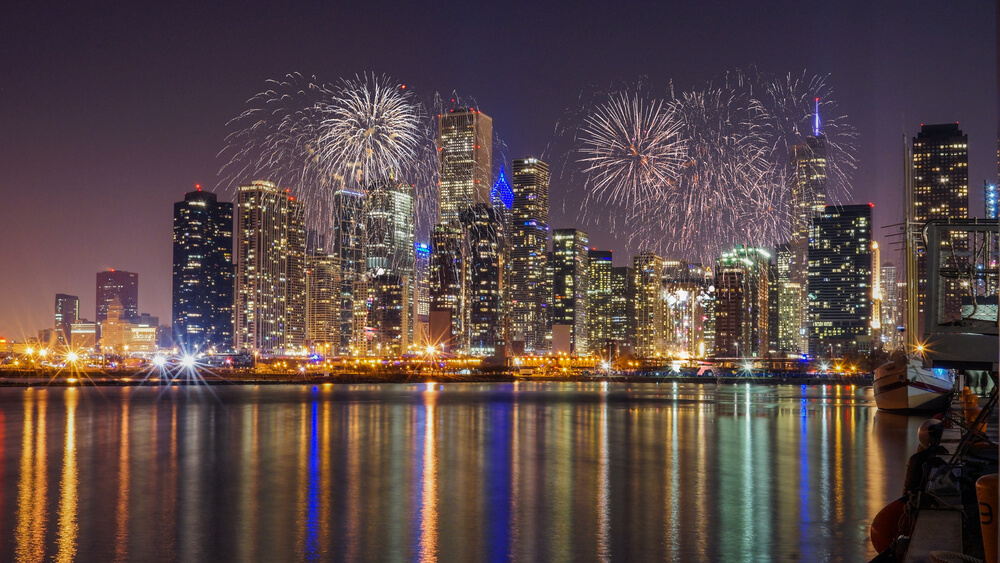 For a truly memorable experience, spend your evening taking a dinner cruise over Lake Michigan, which will provide you with the perfect vantage point from where you can watch the fireworks.

If you would prefer to stay indoors, check out some of the hotels that host huge New Year’s Eve parties, such as:

Not only will these parties included drinks and a buffet meal, but the entertainment is also usually top notch. If you plan on staying in Chicago for a few days, it could be worth looking into one of the New Year’s Eve packages that those hotels offer too.

Then a visit to the Chicago Children’s Museum for Noon Year’s eve is a must.

Wondering what that is?

The fun begins at 10:30am on the 31st of December, and includes craft activities, a dance party and more, with the pinnacle being the countdown to noon. This is the perfect way to celebrate the end of the year with young children.

Anchorage may not seem like an obvious choice when it comes to New Year’s Eve destinations, but you will probably have one of the best nights of your life here.

The main festivities at Town Square Park begin early, at around 5pm when the sun goes down.

What exactly do the festivities involve?

Live music performances and a dance party to begin with, along with light shows, an ice gallery for children, food vendors and more.

A child-friendly fireworks display takes place at 8pm, after which the adults can return for the official one at midnight.

For a celebration that is even more special…

Spend the evening at the Alyeska Resort in Girdwood.

Because this is where the Torchlight Parade takes place. It begins at 9pm over the mountain, where a few hundred skiers and snowboarders make their way slowly down, with one carrying a bamboo torch. As you can imagine, this is an incredibly beautiful sight, and is perfectly topped off with the massive fireworks display at midnight.

Looking for a fun and slightly crazy New Year’s Eve?

New Orleans could be the perfect place for you. A city famous for their Mardi Gras celebrations, the New Year’s Eve festivities in New Orleans come a close second.

The biggest party can be found at Jackson Square, where revellers can enjoy live music performances all night long, along with a number of other attractions.

Well, instead of a ball drop, things are done slightly differently in New Orleans…

A 25 foot pole placed at the top of the building drops a huge fleur de lis, while fireworks provide a dazzling backdrop. This is all choreographed to music, of course.

Once the clock has struck midnight, the festivities still continue on…

Head to Bourbon Street for the best selection of bars and clubs in the city, where you can celebrate the new year until the early hours of the morning.

Home of country music, Nashville is an exciting place to spend New Year’s Eve, even if you aren’t a fan of the genre.

Where about in Nashville should you go?

To the Bicentennial Capitol Mall State Park, which can be found in downtown Nashville. This is where the Nashville’s New Year’s Eve celebrations take place, which promise to keep you busy for the entire evening. 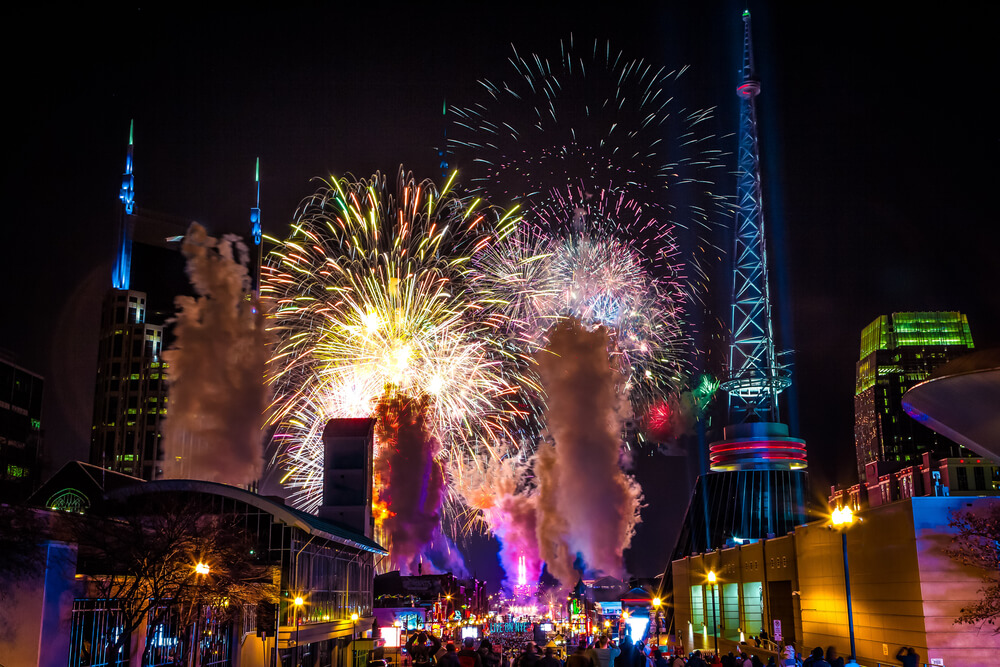 The fun starts at around 4pm, with free music concerts held throughout the evening. Expect big country names to be in attendance, from Keith Urban and Peter Frampton to Caitlyn Smith and Brett Young. There are also numerous exhibits, food trucks and other vendors all around the park, giving you plenty to do.

Instead of a ball drop at midnight, Nashville keeps things unique…

At about 6:15pm, a red music note is raised up a 15 foot pole, and this is then dropped at midnight. This is accompanied by a fabulous fireworks display to celebrate the new year.

Dallas is a city that knows how to party, and this definitely applies to New Year’s Eve.

The place to be is somewhere that provides a view of Reunion Tower.

Because this is where you will find the Streaming Lights event. You don’t have to be right at the tower to watch the celebrations, as the spectacle can be seen from the entire downtown river. Grab yourself a seat by the Trinity River for some of the best views.

What exactly is the Streaming Lights at Reunion Tower event?

It consists of more than 4000 fireworks being let off from the top of Reunion Tower, alongside a light show and accompanying music score, all of which lasts for about eight minutes.

The two day Lights All Night festival will be once again taking place on the 30th and 31st.

Some huge acts have been booked this year, with everyone from Mark Ronson to Diplo to Tiesto expected to perform.

The celebrations in Honolulu are said to be amongst the most family-friendly in all of the USA, making this the city to pick if you have young kids in tow.

What exactly happens in Honolulu on New Year’s Eve?

Well, the Kaka’ako Waterfront Park is the place to go, because this is where the biggest celebrations take place.

The entire park is turned into a magical theme park with eight different activity sections. You will find everything from a giant Ferris wheel, carnival rides and street entertainers to food trucks, a beer garden and other vendors here, with the entire crowd filled with a buzz of excitement. There are several different stages of performers and entertainment to choose from, providing plenty to do all night.

Fireworks take place every hour, beginning at 9pm on the 31st, and this is a part of the night that kids tend to really love. The fireworks, along with the stars, frame the Diamond Head Crater and the open ocean, giving you some truly one-of-a-kind views. 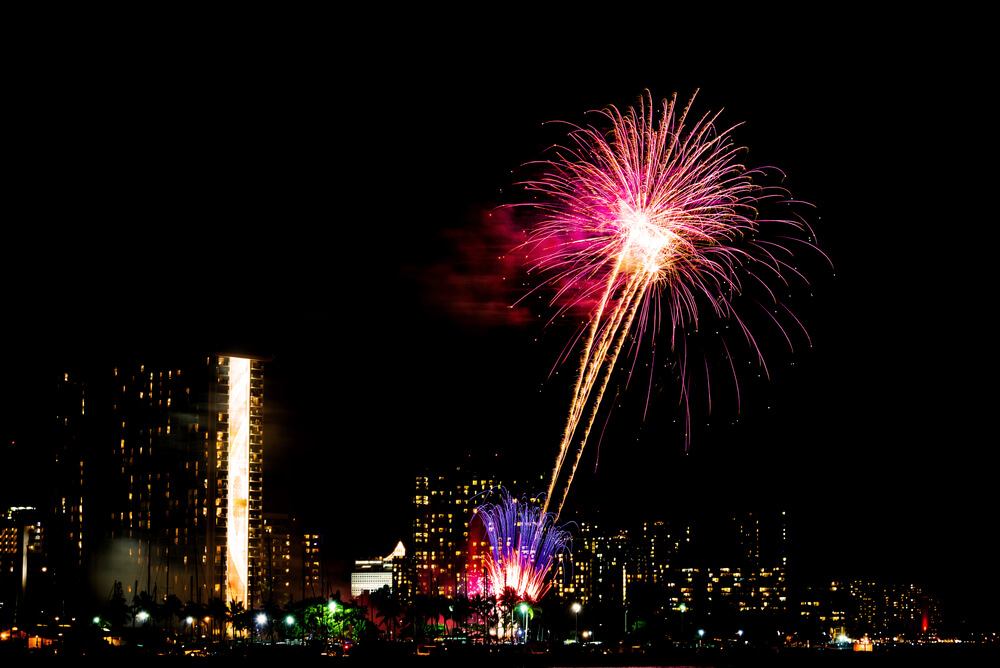 If you plan on spending a few hours at the park, which would definitely be a good idea, make sure that you bring a blanket along with you so that you can spend some time sitting down and taking in your surroundings.

The best thing about New Year’s Eve in Honolulu?

If your head is feeling a little tender the next morning, spending some time on one of the island’s gorgeous beaches will be the perfect cure!

There is so much going on in Orlando on New Year’s Eve, so no matter the type of festivities you are looking for, you will most likely be able to find it in this city.

What does it involve?

Free entry into all seven of the themed bars located here, including the Monkey Bar, the Wall Street Cantina, and the Hen House.

You will also be able to enjoy light shows, DJs, dance parties, and, of course, an excitement-filled countdown to midnight, after which you will be able to view the city’s orange drop.

Each one of these will be hosting their very own New Year’s Eve bash, such as:

Savannah is bursting with activity each year on New Year’s Eve, and this year is no exception…

The main festivities take place at City Market, and this starts at 9pm. It includes live music, restaurant specials, market shops and stalls, and more.

Head to River Street for the annual Up the Cup celebration. Rather than dropping a ball, the city drops a large to-go cup instead, complete with a Wet Willie countdown.

Of course, fireworks are a-plenty, with spectacular views to be seen of the fireworks exploding over the river.

While the fireworks here are great, the ones on Tybee Island are even better…

Known for hosting the largest New Year’s Eve fireworks show in the south-eastern USA, the best views can be had at Tybee Pier.

New Year’s Eve is a time for celebration, and there are plenty of places where you can do this in the USA. From the beaches of Honolulu to the skyscrapers of New York City, these 10 cities will definitely not disappoint when it comes to ringing in the new year.