Where to Visit the Most Unusual Animals in the World

No matter how much of an animal lover you are, there are likely to still be numerous species around the world that you have never even heard of.

From the gharial of India to the walking fish of Mexico, here are some of the most unusual animals in the world, as well as the places you need to go if you want to catch a glimpse of them. 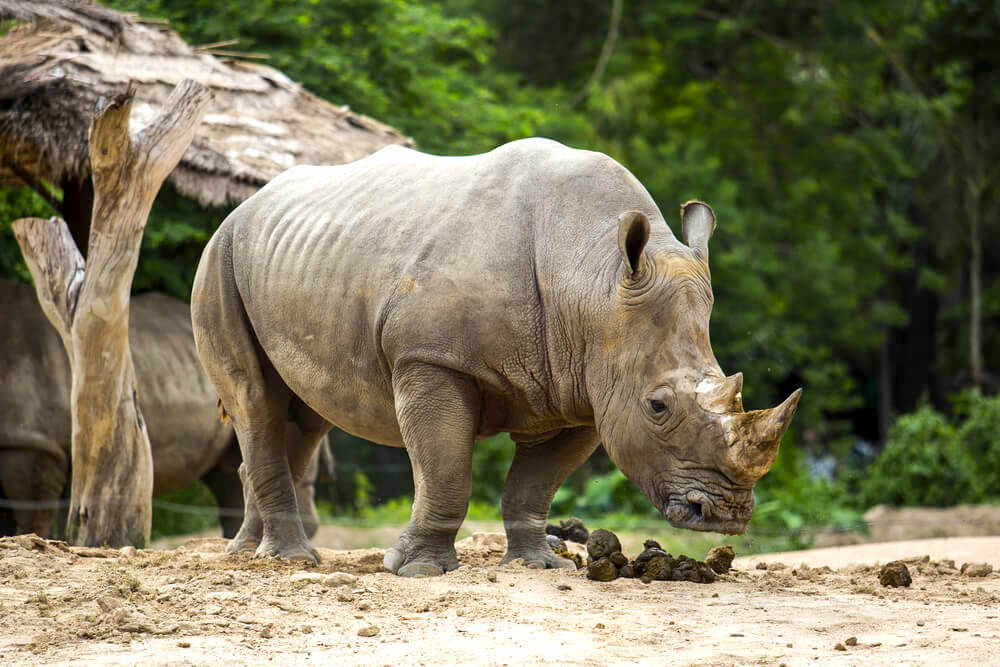 Also known as the hairy rhinoceros, the Sumatran rhino is unique for a number of different reasons, such as:

Sadly, in 2015, the Sumatran rhino was declared extinct in the wild in Malaysia, and can now only be found in protected areas, where they are literally guarded by their own protection teams in order to prevent poaching.

Want to see these magnificent creatures?

You better be quick, because there are only around 80 of them left on the planet.

Wondering why there aren’t more captive breeding programs set up for these rhinos?

There are a few, but these animals are difficult to breed, with long pregnancies that last 16 months. In fact, only four Sumatran rhinos have ever been born through captive breeding programs.

To see this animal in a semi-wild habitat, the best place to go is the Sumatran Rhino Sanctuary at the Way Kambas National Park in Indonesia.

Around 100 hectares of land has been set aside for the Sumatran rhino here, and their breeding program is looking to be quite promising.

In addition to being home to the rare Sumatran rhino, you will be able to see several other protected animals at the national park, including: 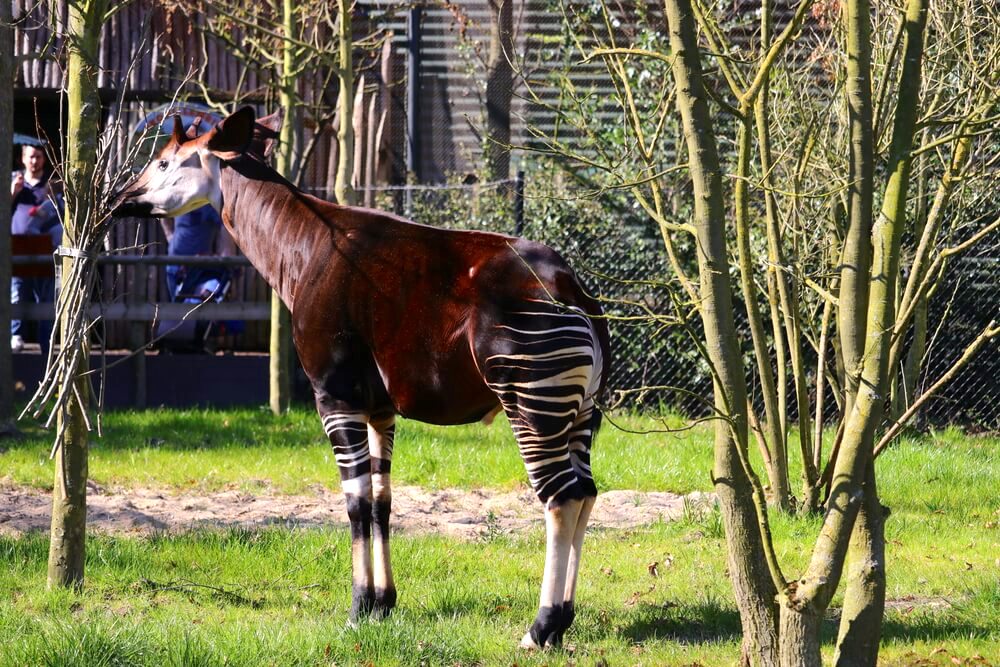 Native to the Democratic Republic of Congo in Africa, the okapi has stripes that make it look similar to a zebra, but is actually related to the giraffe. In fact, it is the only relative of the giraffe that is living today.

This hoofed mammal is quite secretive in nature, meaning that it can be difficult to spot them in the wild. They live in rainforests, and this is why they are shorter than giraffes, as they need to be able to navigate fallen branches, tree trunks and more.

Why do they have such unusual stripes?

They actually provide camouflage when the sunlight filters through the trees in a forest, and also enable a young okapi to see where its mother is.

Wondering where to go to see okapi in the wild?

The best place is the Okapi Wildlife Reserve in the Ituri Forest in north-east Congo.

The reserve itself is absolutely stunning, with everything from dense rainforests to cascading waterfalls, showcasing some of the region’s finest natural beauty. When you take a look at the scenery all around you, it is no surprise that the reserve was designated a UNESCO World Heritage Site in 1996.

In terms of the okapi, the population here is around 5000, which is quite impressive considering that only 30,000 okapi remain in the wild.

Wondering what else you will see in the park?

Here are a few of the reserve’s other highlights: 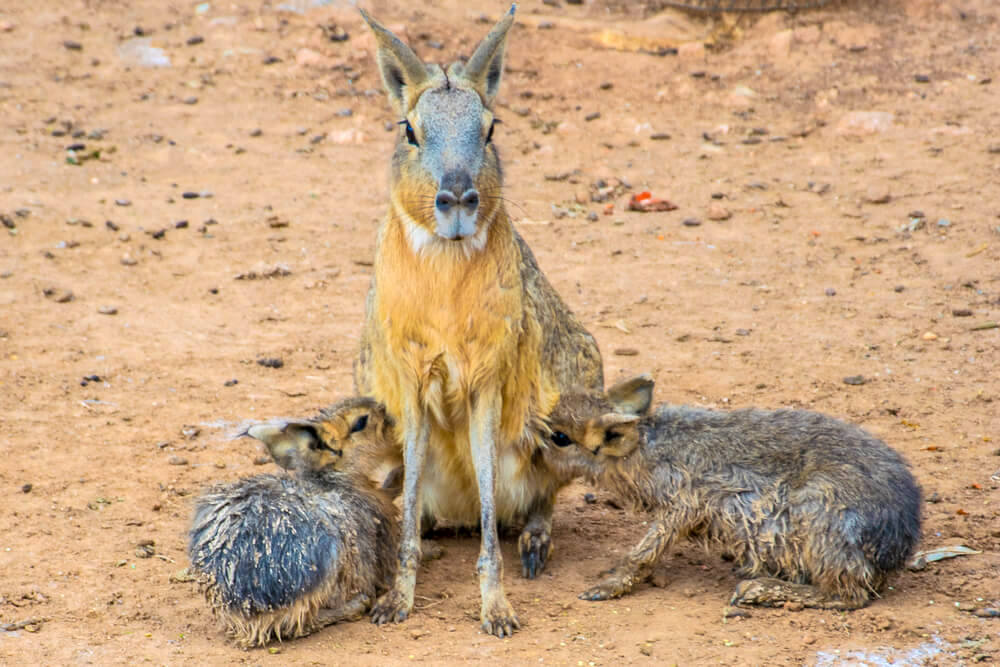 The Patagonian mara is most definitely an unusual animal.

When looking at one for the first time, it can be hard to determine what this creature actually is.

These animals are actually long-legged rodents, although their bodies are similar to those of hoofed mammals. They act in a similar way to rabbits, and this is perhaps what has led to an increasing number of these animals being kept as pets, and even being trained to walk on a leash.

These animals are native to South America, but, just like all of the other animals mentioned above, there aren’t many of them left in the wild…

Patagonian mara are classed as near threatened, due to populations being wiped out by hunting, as well as habitats being taken over by domestic sheep.

The region itself is exceptionally stunning, and is one of the last stops a person can make before heading to Antarctica. Its natural beauty makes it a popular spot for hiking and trekking, with lush valleys, snow-capped peaks, craggy glaciers and so much more to see.

It’s a little tricky spotting the Patagonian mara on your own, especially if you aren’t experienced in it, so your best bet when it comes to seeing them would be to sign up for a local wildlife tour.

In addition to seeing the Patagonian mara, you are also likely to catch a glimpse of the following: 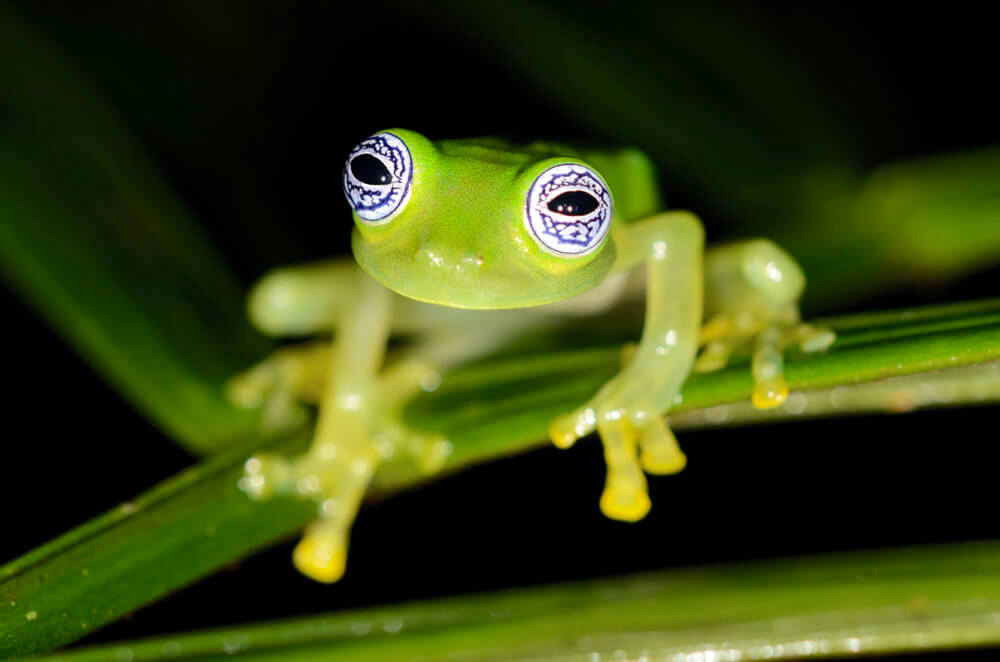 Frogs may not seem like anything unusual, but glass frogs are not like the frogs you would usually see in your backyard…

While these small frogs may look primarily lime green in color, if you step a little closer, you will notice that their abdomens are completely transparent.

Yes, this means that you can see the organs, including the liver, heart and intestines, within their body, as well as their bones.

There are actually 60 different species of glass frogs out there, so you would think that you would have a high chance of seeing one in the wild.

However, this isn’t quite true…

To begin with, glass frogs are nocturnal animals that live in rainforests, so you would have to venture out into a rainforest after dark.

If that hasn’t put you off…

Head to the Tortuguero National Park in Costa Rica. https://orogoldstores.com/top-honeymoon-destinations/

This national park sprawls out for over 19,000 hectares, and is home to a large population of glass frogs. You will also see 170 other species of reptiles and amphibians here, along with 60 mammal species and 300 bird species.

While the variety of animals here may be impressive, the park is most famous for being one of the most important turtle nesting sites in Costa Rica, with a 22 mile strip of beach being protected for nesting turtles.

Since glass frogs tend to favor areas near fast-flowing streams, taking a canoe or kayak ride down one of these rainforest streams would give you a better chance of seeing these creatures than if you were on foot. 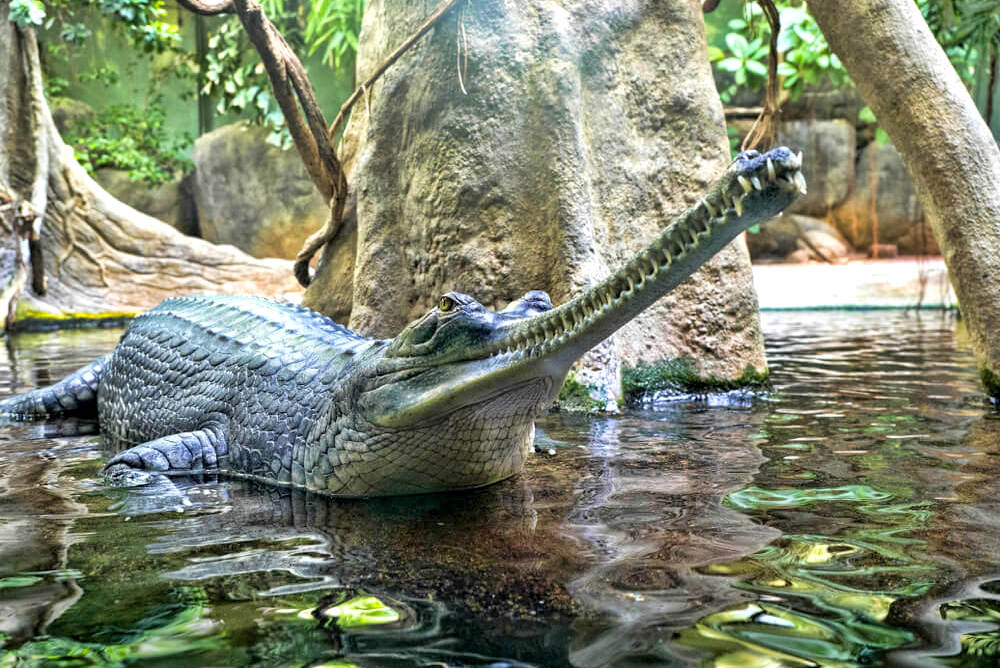 Also known as the gavial, or the fish-eating crocodile, the gharial is a crocodilian that is native to the north of India. These are large creatures that can reach up to 15 feet in length, and are recognizable by their thin snouts that make it easy for them to catch fish.

Why have you never heard of a gharial before?

Because ever since the mid 1900’s, the population of gharial in India has declined by more than 98%.

Due to humans, of course. Not only have humans manipulated the flow of rivers around the country, making it harder for the animals to find a suitable freshwater habitat to survive in, but these special creatures are also being used in traditional Asian medicines.

Because of all of this, the gharial has been classified as critically endangered.

So, how can you go about visiting the gharial?

Well, these crocodilians can be found in zoos around the world, but visiting an animal in its natural habitat is always so much more rewarding.

To do this, you will need to head to northern India, where around 1500 gharials are thought to be living.

There are a few national parks that are home to gharial populations, with one of the most popular, as well as the oldest in the country, being the Corbett National Park.

Originally established to protect the Bengal tiger, this park is home to one of the largest gharial populations in India, and there are several viewpoints around the park from where you can try to catch a glimpse of these shy reptiles.

The park also offers guided safari tours, where you will be able to see a number of other native animals, including: 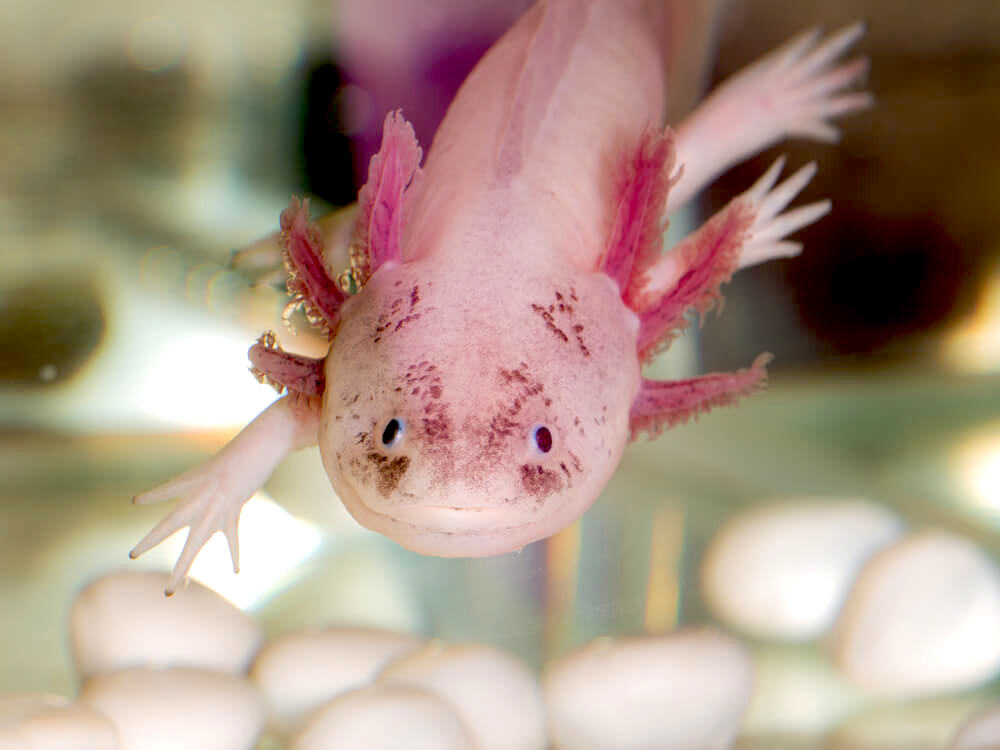 Otherwise known as the Mexican walking fish, the axolotl is actually a type of salamander, making it an amphibian rather than a fish.

No matter what it may be classified as, this fascinating creature has quite a paradoxical story to it…

Although the axolotl is near to extinction in the wild, they are actually one of the most widely-distributed amphibians in the world’s pet shops and laboratories, with this animal being considered a culinary delicacy in Japan.

While there are several captive breeding programs for the axolotl around the world, the only place to see this animal in the wild is in the lakes and canals of Xochimilco, which lies nearby to Mexico City.

Certain canals and waterways of Xochimilco have been blocked off with barriers to protect axolotl from invasive and predatory fish species, where they are then monitored by researchers until they are strong enough to enter back into the rest of the water system.

Axolotl numbers in the wild are drastically declining, and if you would like to learn more about these creatures, the Parque Ecologico Xochimilco is the place to go. There are several recreational activities to be found here, as well as a restored natural area in which axolotl are thriving. 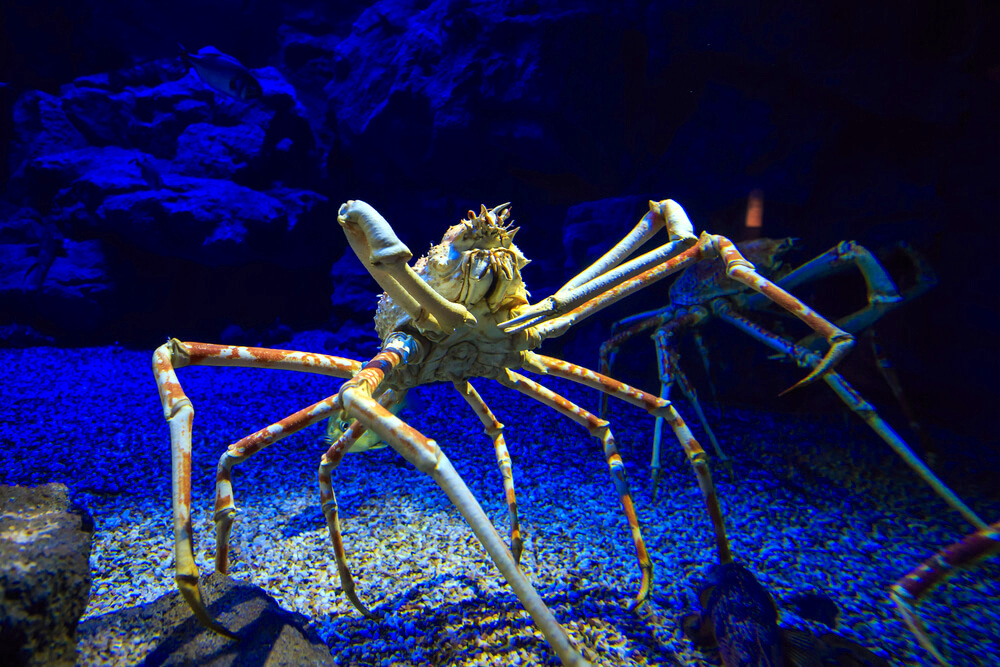 Are you afraid of spiders?

If your answer is yes, this is an animal that you probably won’t want to see…

Although technically a crab rather than a spider, these carnivorous animals have the longest legs of any arthropod, and scuttle across the floor of the ocean in the same way a giant spider would.

They can actually reach over 12 feet in length, and weigh up to 44 pounds.

Don’t be, because unless you are diving in the deep ocean around Japan, you are unlikely to have a surprise encounter with one. In fact, the larger and older they get, the deeper into the ocean they move.

Want to know another fascinating fact about them?

They live for at least a century!

So, if the Japanese Spider Crab lives deep within the oceans of Japan, there isn’t much chance of seeing one, right?

Not in the wild, but aquariums all over the world are home to these crabs. Not only will you be able to see the crabs up-close, but many facilities also give visitors the chance to handle one of these unusual animals.

Here are a few aquariums around the world with the Japanese spider crab to check out:

The world is full of fascinating and unusual animals, but, sadly, many of their populations are drastically declining. While breeding programs are in place for some, there is nothing quite like visiting an animal in its natural habitat. If you do decide to visit one of these unusual creatures, make sure you do so in a way that is sustainable and supportive of their long-term future.