Where to See the Most Unusual Plants in the World

There are weird and wonderful plants to be found all over the world, but some of them really are just that extra little bit special.

From the mountains of the Philippines to the forests of Costa Rica, here are the destinations to head to if you want to check out some of the most unusual plants in the world.

You may have heard of Palawan before, because this tropical island is quite famous.

Because it has been voted as the world’s best island numerous times now, thanks to its awe-inspiring natural beauty, rich culture and heritage, and delicious local cuisine, which heavily features fresh, locally caught seafood.

For those who love unusual plants, there is one recently-discovered variety in Palawan that you really need to see…

The Nepenthes attenboroughii was named after naturalist Sir David Attenborough, and is the largest carnivorous plant in the world, or at least as far as we know.

It is also known as the pitcher plant, and has some unique characteristics. Its bell-shaped flower can hold up to one and a half liters in volume, while the stem can reach over five feet in height. Within the cavernous flower lies a chamber containing digestive juices, as well as a small amount of nectar. This is what draws insects, and even small mammals, into the plant, after which the plant’s waxy coating causes them to fall into the flower.

Want to see this plant?

It can only be found at the top of Mt. Victoria in Palawan, on ground that is so rocky that it cannot support much other natural life. The mountain itself is the second highest on the island, with the majority of it being relatively unexplored.

How long does it take to reach the summit?

At least three days, and since there are quite a few rock faces that are pretty much vertical, you need to have a fair bit of climbing experience behind you in order to tackle this mountain.

However, if you decide to take it on, you won’t be disappointed…

In addition to seeing the pitcher plant, you will come across many other plant species that are unique to the mountain, and will also be able to interact with the local Tagbanua tribe.

The second largest national park in New Zealand, the Kahurangi National Park is home to some of the rarest and most fascinating plant life in the country.

The park is over a million acres in size, and boasts numerous walking tracks to enable visitors to thoroughly explore the park.

The park is home to two mountains, and these are where you need to go if you want to see a truly unusual plant…

Known as the vegetable sheep, this alpine plant resembles a sheep from a distance, due to the way in which its surface is covered in tiny woolly leaves. The cushion that is created helps to keep the plant warm at such a high altitude, and this has allowed the plant to thrive and evolve in different ways over the years.

In addition to being able to see the vegetable sheep, there are quite a few other natural wonders that you will find in the Kahurangi National Park, such as:

Stretching out for more than 400,000 acres, the Sequoia National Park is named after its famous giant sequoia trees.

The most well-known of them all is called General Sherman, with thousands of tourists flocking here every year to see the largest tree on the planet. 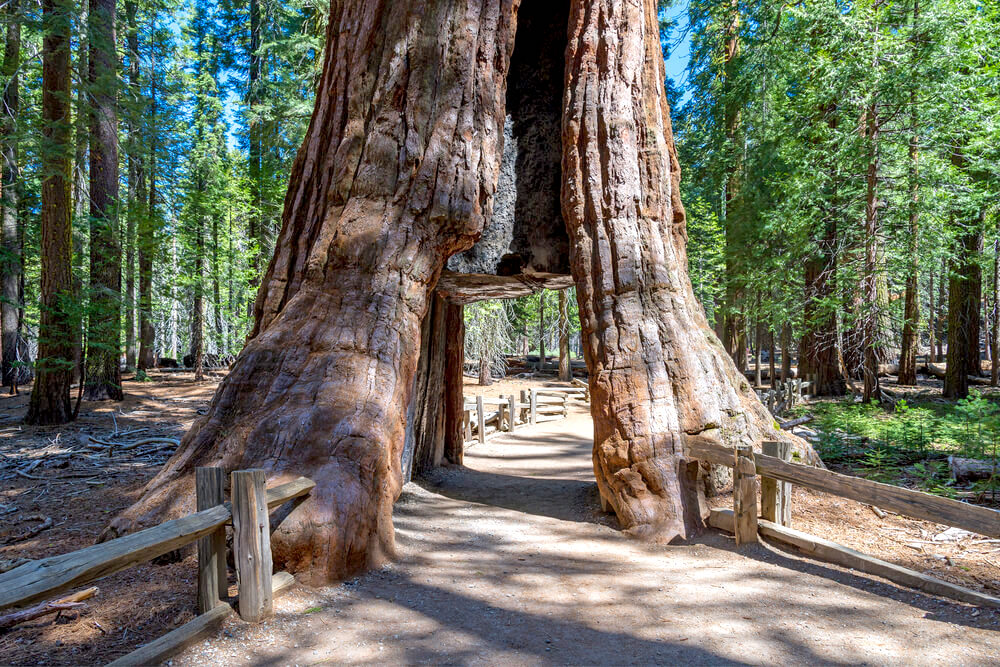 Not only is the sheer size and volume of this tree impressive, but so is its age, with General Sherman believing to be between 2300 and 2700 years old.

The area of the forest where you will find General Sherman is called the Giant Forest, because it is home to five of the ten largest trees in the world, providing some truly magnificent landscapes to explore. The best way to see these beauties up close is by following the Sherman Tree Trail. The trail itself is less than a mile long, and will not only take you past the base of General Sherman, but also the other giants in this part of the forest.

Have you ever heard of a cloud forest?

This term refers to forests, usually either tropical or subtropical, that have a pretty much constant level of cloud cover around the forest’s canopy. This not only provides the plants with a continuous supply of moisture, but also prevents moisture from within the plants from evaporating, resulting in the perfect habitat for a spectacular amount of biodiversity.

The Montverde Cloud Forest Reserve in Costa Rica is one of the most famous cloud forests in the world.

Because this protected stretch of forested land extends out for more than 35,000 acres, and is home to such a rich ecosystem, including:

What about its unusual plants?

There are several to be found here, but one that you should definitely keep an eye out for is called Psychotria Elata, also known as Hooker’s Lips.

This is a plant that you will instantly recognize, thanks to the way in which its tiny white flowers are covered by a leaf-like bract that looks just like a pair of perfect red female lips.

Sadly, due to deforestation, as well as the fact that this plant has become increasingly popular with collectors around the world, Hooker’s Lips is now considered to be endangered. If you want to ensure that you catch a glimpse of this plant while in Montverde, it would be worth signing up for a guided tour of the cloud forest, where an expert will be able to point this plant out to you.

The sixth largest island in the world, Sumatra is known for its rugged wilderness and untouched nature. While the entire island is absolutely stunning, the west part is distinctly unique, not only in terms of its culture but also its scenery.

It is in West Sumatra where you will find the Batang Palupuh Nature Reserve, home to a number of rare and protected plants.

One of these plants is the Rafflesia Arnoldii, also known as the corpse lily. 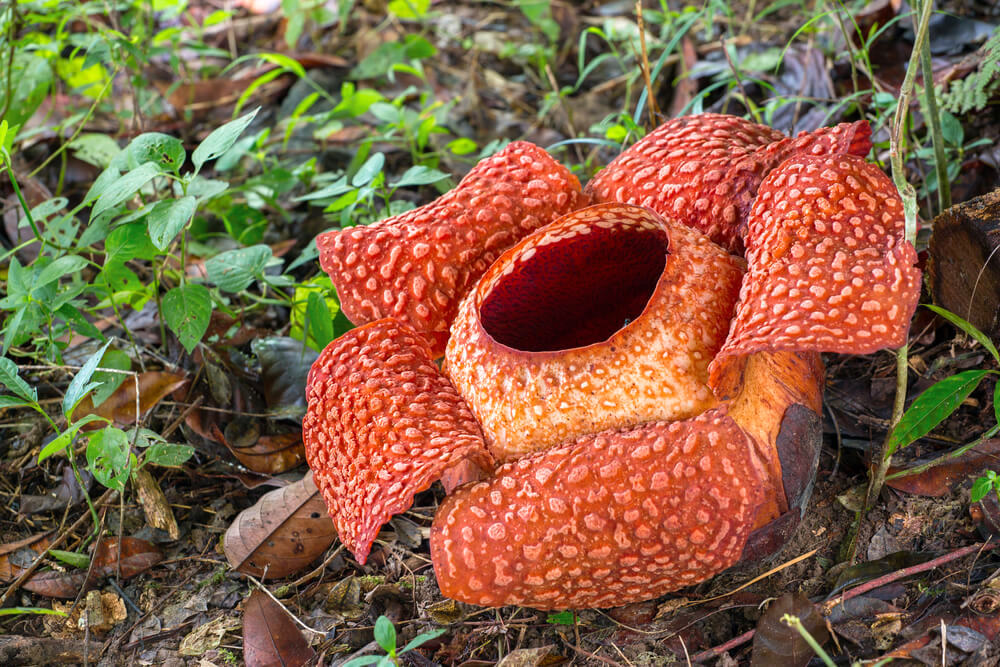 Because it smells of decaying flesh.

This might not seem like a tempting reason to visit, but this parasitic plant produces the largest individual flower on the planet.

How large is it?

The largest one discovered was over a meter in diameter and weighed 11 kilograms. Each petal was thicker than an inch. This is one of the rarest plants in the world, and is near extinction, meaning that you need to seek it out soon if you want to see it.

While you’re at the nature reserve, keep an eye out for the Amorphophallus titanum, another rare and giant flower. This plant is also known as the corpse flower because, just like the corpse lily, it smells of rotting meat.

While the corpse lily blooms quite consistently throughout the year, the corpse flower is much more sporadic, so you will need to have luck on your side if you are hoping to catch this one in action. It is rare for a plant to bloom more than once a year, with the majority of them blooming every three to ten years.

Often referred to as the Jewel of Arabia, the island of Socotra lies just off the coast of Yemen in the Arabian Sea. Since this island has been quite secluded from larger land masses for centuries, it now boasts a wide range of biodiversity that cannot be found anywhere else on the planet.

However, there is one plant in particular that Socotra is most famous for…

Known as the dragon blood tree, or Dracaena cinnabari, this tree features tightly woven branches underneath the leaves, looking almost like the tree’s roots are in the air.

Wondering what gives this tree its unique name?

The vivid red sap produced by the tree, which actually has a number of uses. Not only can this gummy resin treat a range of health conditions, but it is also known for being a stimulant and an astringent, as well as a fantastic dye. It has been used in the past to make everything from toothpaste to varnish, making this tree extremely important to the island.

Of course, with Socotra being such an untouched parcel of wilderness, there are plenty of other unique natural features to be found here too.

Keep an eye out for the following: 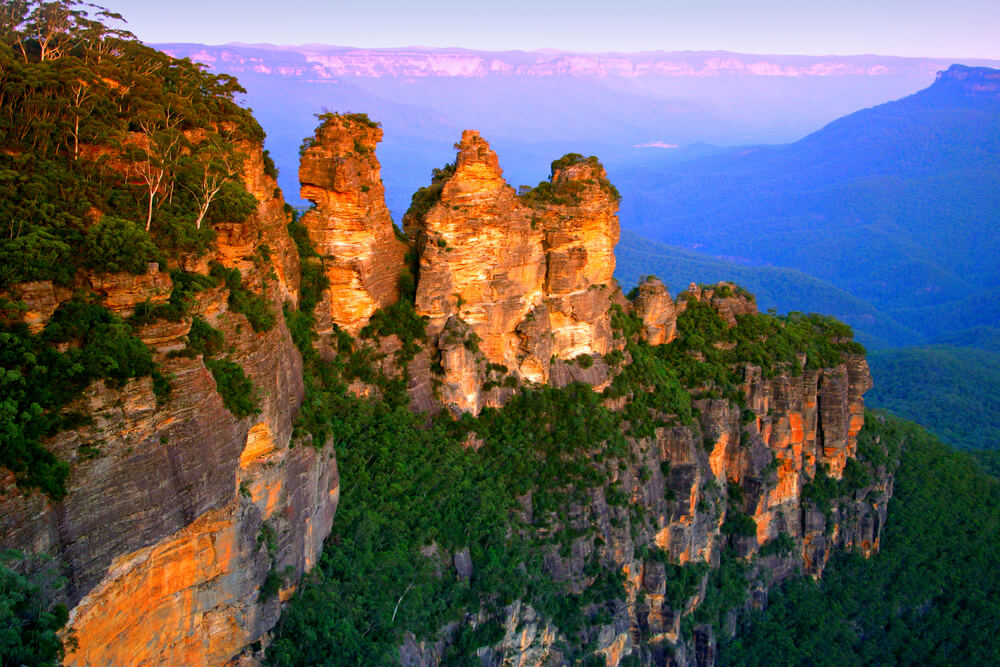 Famous for its dramatic natural beauty, the Blue Mountains features over one million hectares of eucalyptus forests, steep canyons, cascading waterfalls and more. The range has been designated a World Heritage Area, and there are 87 miles of walking trails to enable visitors to really explore their stunning surroundings.

One of the plants that you will see growing wild here is the large duck orchid, also known as Caleana major. If you are familiar with orchids, you likely already know that they come in so many weird and wonderful formations, and this variety is the perfect example of that.

The flower itself is shaped like a flying duck, and it has evolved to look this way on purpose. Its unique shape attracts specific insects that pollinate the flower, and this is how the flower has managed to thrive over the years.

Head on over to the Blue Mountains Botanic Garden, located at Mount Tomah. There are over 5912 different plant species growing here, with these plants coming from more than 65 countries. The garden has a great system for helping visitors to identify plants that they like, enabling them to learn more about these plants afterwards.

What about the wildlife in the Blue Mountains?

There are over 400 different animal species roaming this mountain range, and this includes quite a few threatened and endangered species.

Keep an eye out for the following:

For even more animal life, the Featherdale Wildlife Park is not too far away, and boasts the only koala petting facility in Australia.

The planet is home to some truly unusual plants, but, sadly, many of these are now critically endangered. If you do decide to pay a visit to see one of these natural beauties in person, make sure that you follow all the rules when it comes to keeping the plants, as well as their ecosystem, intact, so that generations to come can also enjoy the rich biodiversity that the planet has to offer.