We all know that Europe is a continent brimming with millennia-worth of arts, culture and history, not to mention the masterful architecture that graces pretty much every European capital.

But did you know that the Old Continent is also home to some of the most breathtaking feats of nature?

Keep reading to find out what these are.

Montenegro is a small coastal country located in the south-eastern corner of Europe.

One of the starkest examples of these oppositions can be seen in the Bay of Kotor (also called the Boka Bay), a territorial unit that is wedged between the dramatic cliffs of the Lovcen Mountain and the bright blue east Adriatic waters. 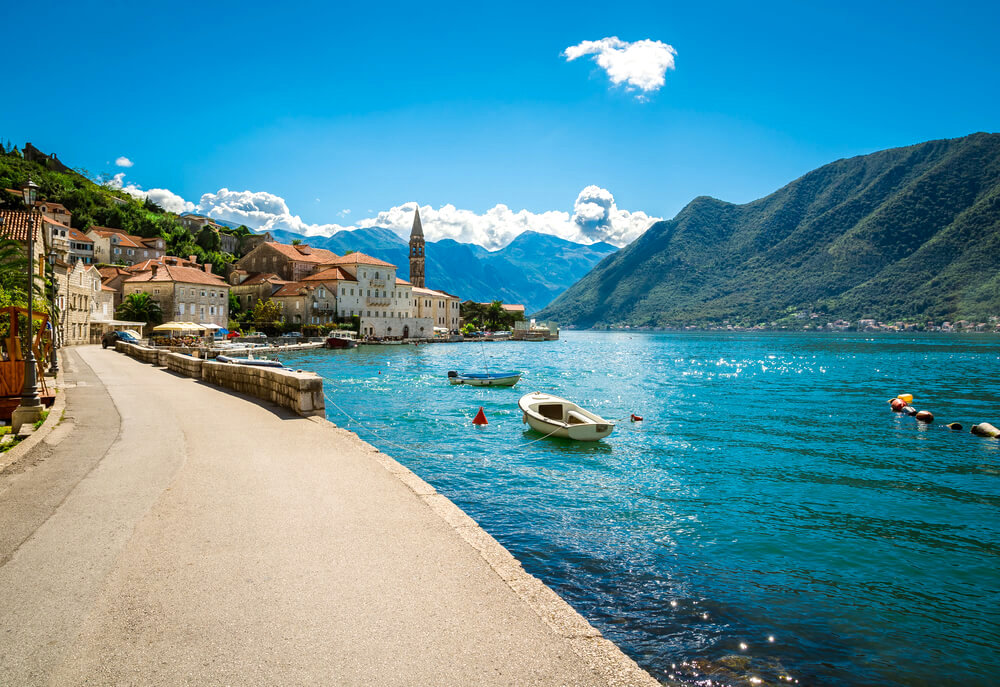 At the heart of Boka lies Kotor, a maze-like historic town that used to be one of Venetian maritime trade hubs. The town’s ancient ramparts, which are testament to its powerful historical status, rise along the edges of the surrounding mountains, forming a spectacular juxtaposition of natural and man-made creation.

The northernmost province of Finland is known to most people for two things: being the official home of Santa Claus and some of the most stunning natural phenomena.

Since this area sits firmly on the Artic Circle, it should come as no surprise that Lapland experiences extreme weather conditions. Due to its unique geographical positioning, this region sometimes witnesses perpetual darkness for days on end during the winter months.

On the plus side, this is the time when you can catch the magnificent Aurora Borealis, or the Northern Lights, when the entire Arctic sky lights up with bursts of yellow, purple and green.

Even though most of us have the image of Lapland as Polar wonderland, not everything in this Finnish province is pretty snow fells and hordes of reindeer.

Nestled in central Europe, Slovenia is a country that, despite its small size, somehow manages to pack in the very best of European landscape – from emerald rivers and thick forests to Mediterranean coasts and alpine cliffs.

One of its most stunning feats is Lake Bled, a magnificent body of water situated in the northwestern part of the country on the Julian Alps. 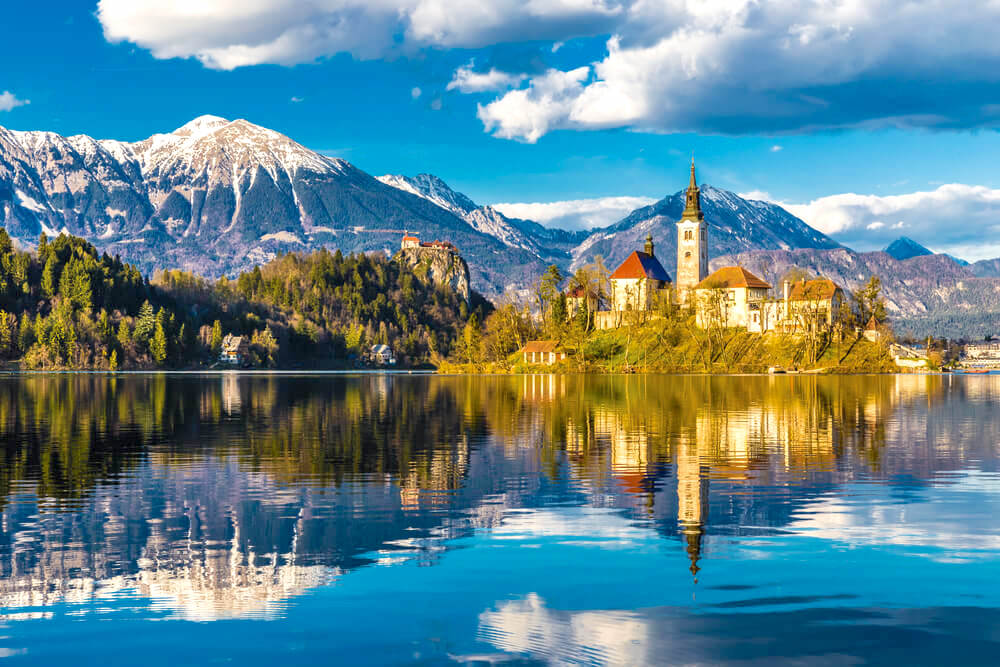 The crown jewel of this 2-kilometer-long lake is the tiny island sitting in its southwestern part. The tiny islet houses the Church of Mary the Queen, a beautiful Gothic construction with a tall bell tower that dates back to 15th century.

During the summer months, northern part of Lake Bled becomes a popular getaway for people looking to swim and catch some rays against the stunning backdrop of Slovenian countryside.

The northern part of the lake also houses lush thermal springs, which are believed to have all sorts of healing properties.

Faroe Islands are a small archipelago that lies in the North Atlantic Ocean, halway between Norway and Iceland.

The 18 isles that form this northern cluster are home to some of the wildest and most surreal scenery in Europe.

Featuring never-ending expanses of green fields juxtaposed against hostile, barren cliffs, the Faroese landscape looks like it has been transported straight out an epic fantasy novel.

The pinnacle of Faroe Islands’ otherworldly character is the Leitisvatn, an iridescent lake that sprawls across the ominous, plunging cliffs.

The positioning of the lake makes it seem like it’s levitating right above the ocean’s frigid waters.

And with this, we end our round-up of the most awe-inspiring sceneries scattered around the Old Continent. We hope it has inspired your next travel adventure. Do you feel your feet itching yet?

Given that it’s one of the most romantic spots on Earth, you’ve probably come across photos depicting the Tunnel of Love while flipping through travel magazines or scrolling down inspirational blogs.

This 5-kilometer-long stretch of old industrial rail, which is located in western Ukraine, starts in the town of Klevan and ends in the village of Orzhiv.

The section is completely enclosed with lush trees, which form arches all along the rail. In the spring and summer, the leafy branches form a beautiful verdant tunnel, ideal for breezy strolls. 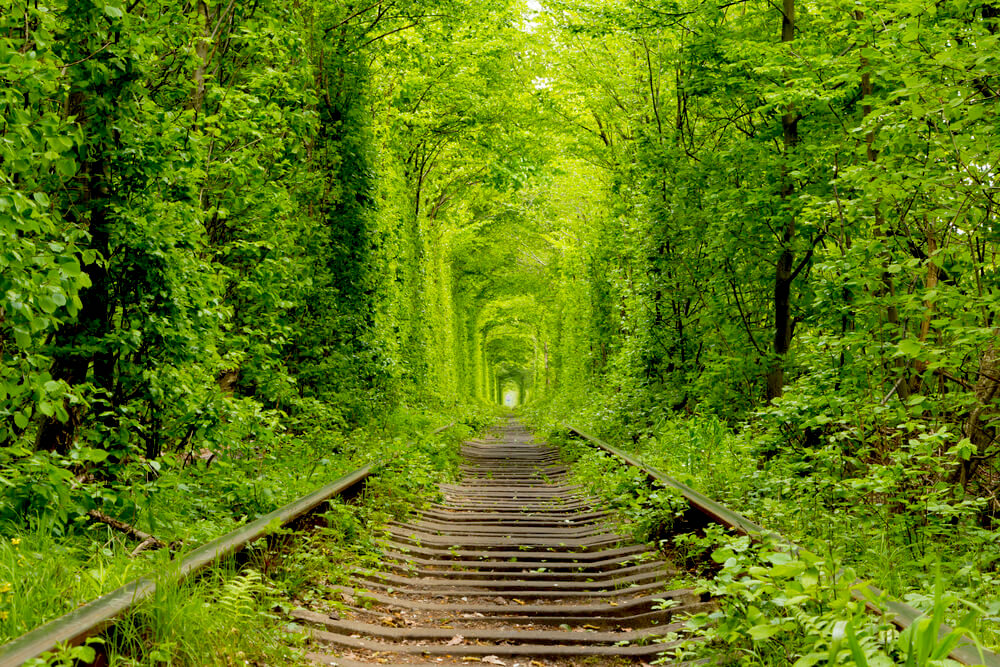 Due to its enchanting atmosphere, the Tunnel of Love has become a favorite destination for couples from Ukraine and abroad.

Tunnel of Love is also the most photographed place in the country, which means you should definitely put it on your “to-go” list if you ever happen to find yourself in Ukraine.

When someone says “Greece”, chances are you will think of picturesque sugar-cube houses tightly stacked against cobalt-blue sea.  In real life, the image in your mind translates to the beautiful island of Santorini.

This crescent-shaped island lies in the southern part of the Aegean Sea, some 75 kilometers from the Greek mainland.

A major part of Santorini’s tourist appeal lies in its intriguing geology: the island is, in fact, what remained of an ancient volcanic crater which was sunk during the Minoan eruption that occurred some 1,500 years ago.

The collapsed caldera of the former volcano rises up to 400 meters, forming dramatic rocks that slope into the iridescent lagoon off the western coast of Santorini.

Perched on the roughly chiseled cliffs, you will find densely packed rows of Cycladic houses and Byzantine style white-and-blue churches, which, together with the azure waters and dizzying cascades, form a picture-perfect sight.

Croatia is a country that lies in the western Balkans, east of Slovenia.

It is best known to holidaymakers for its vast coastline, which stretches for over 1,700 kilometers along the Adriatic Sea.

Due to its many gorgeous islands and spectacular seaside, Croatia’s popularity as a holiday destination has been on a steady rise (also helped by the fact that it’s one of prime filming locations for the uber-popular TV show Game of Thrones).

And yet, Plitivice Lakes National Park, one of Croatia’s most attractive sights, is located further inland, just off the border with Bosnia and Herzegovina. 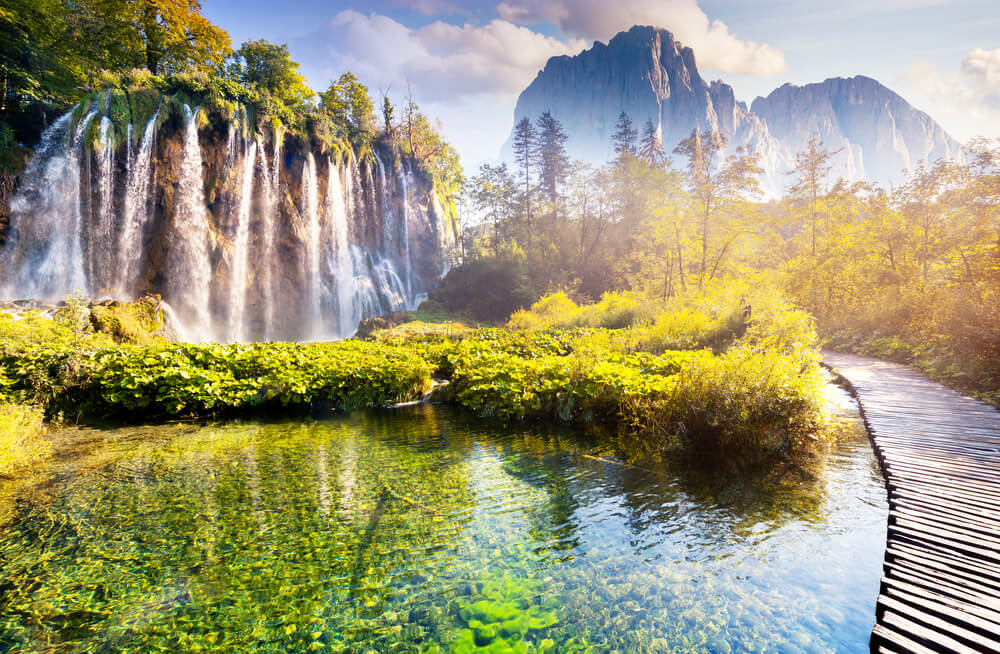 This UNESCO Heritage Site is composed of sixteen breath-taking lakes, which are beautifully framed with cascading waterfalls and thick, luscious greenery.

This serene slice of paradise has become a favorite getaway destination for people looking to unwind and clear their minds amidst the relaxing sounds and sights of nature.

The Emerald Isle is known for idyllic scenery, from the unmistakably green fields to the undulating hills and the craggy coast.

One of Ireland’s most impressive gems are the Cliffs of Moher, which lie in the Burren region of County Clare, on the western coast of the country. These ominous cliffs stretch 8 long kilometers that overlook the vastness of the Atlantic Ocean.

The highest point of the cliff reaches a whopping 214 meters, opening up some of the most spectacular views of the ocean and the surrounding region.

The southernmost point of Cliff of Moher ends in Hag’s Head, a mythical rock formation that resembles a woman gazing at the sea.

Serbia is a land-locked country located in the Balkan region, whose popularity has been on a steady rise, especially among adventurous backpackers and other types of budget-conscious travelers.

Even though its main draw are the bustling metropolitan areas like Belgrade and Novi Sad, Serbia’s breathtaking countryside doesn’t fall far behind. The rural parts of the country are characterized by colorful landscape, from vast green plains to towering mountain ranges.

The Uvac River flows between two such mountain ranges, Zlatar and Zlatibor, which stretch in the southwestern part of the country. 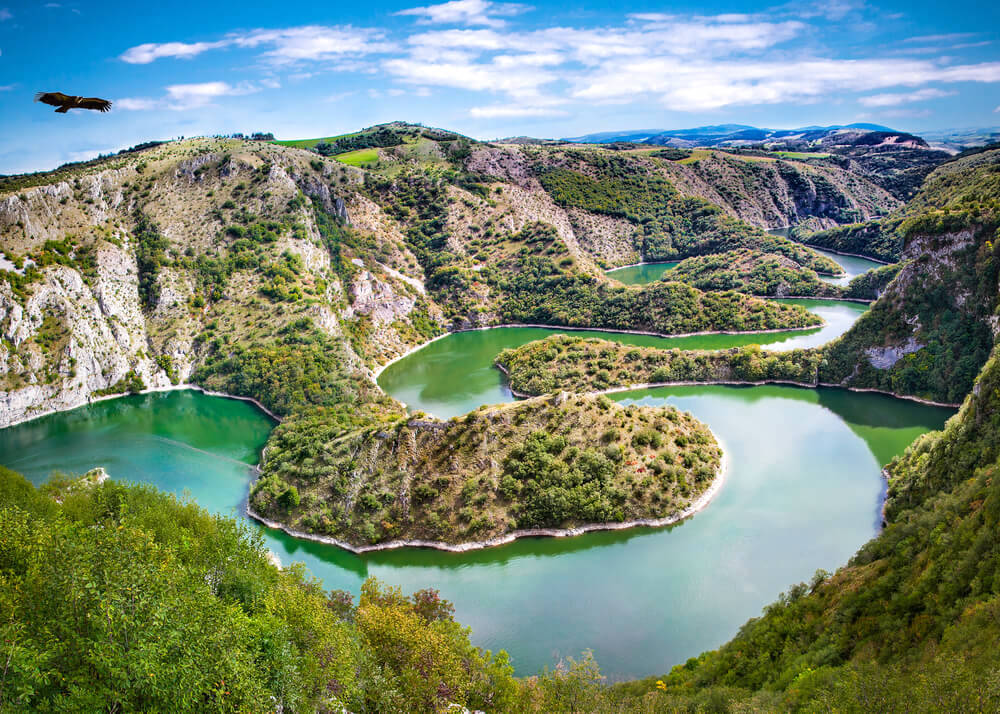 In the Uvac Canyon, the river forms snake-like meanders, which make for an astonishing sight when observed from atop of the surrounding rocks.

The rugged cliffs which frame the Uvac are also one of the largest natural habitat for the whitehead griffon vulture in Europe. These birds often cruise around the meandering river while scavenging for food.

The beauty of England’s Lake District has been inspiring writers and artists for centuries.

The great Romantic poet William Wordsworth once described it as “the loveliest spot that man hath ever found”.

This area offers the finest of British scenery, from the emerald Bassenthwaite Lake and Coniston Water to the copper-colored bracken and sloping fells.

When coupled with rustic architecture that graces the local villages, it’s no wonder that thousands of tourist flock to Cumbria in search of unparalleled combination of beauty and tranquility.

The gargantuan Matternhorn is among tallest peaks of the Alps and one of the most recongnizable natural sights in Europe. 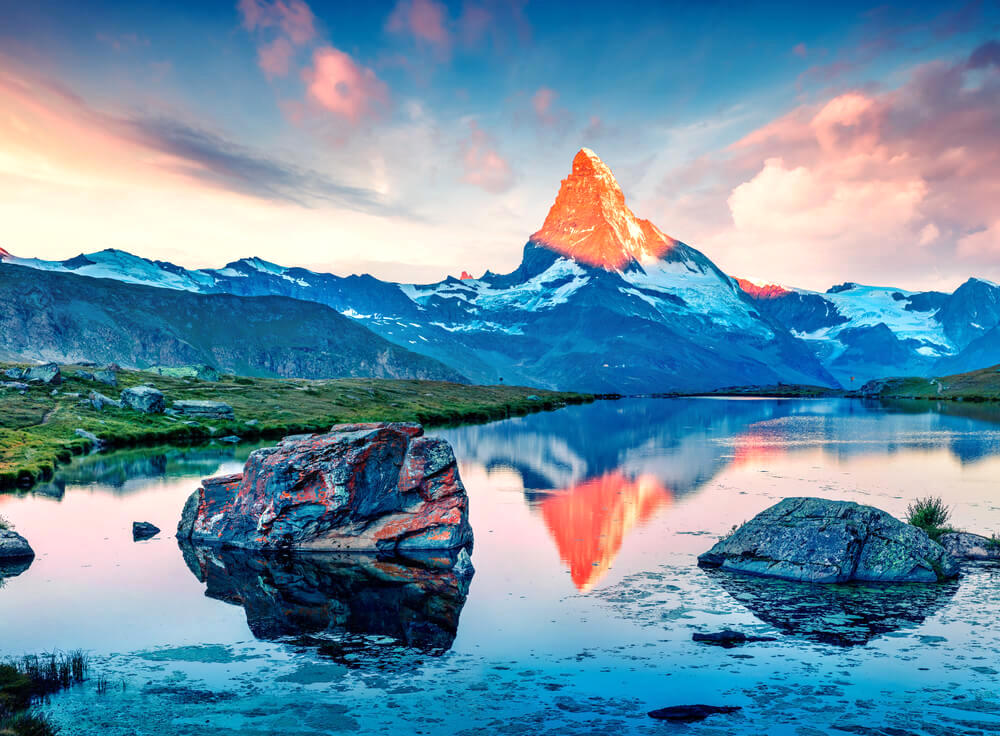 It sits on the border between Switzerland and Italy, at a whoping 4,478 meters above sea level.

The alpine summit has long attracted the most adventurous mountaineers; however, casual observers can admire this awe-inspiring sight from Zermatt, a charming mountain resort nestled at the foot of the mountain.

Italy is a land known for its immense cultural and artistic riches.

However, the natural jewels of this boot-shaped country shouldn’t be overlooked either.

When it comes to scenery, Italy really has it all: alpine highlands, rolling vineyards and azure waters.

However, one if its most famed destination is the Amalfi Coast, a 50-kilometer strech that runs from the town Salerno to Sorrento.

This breathtaking coastal region feaures a long, steep cliff that plunges into the sparking blue waters of the Tyrrenian Sea.

Due to its beautiful, contrast-ridden landscape, Amalfi Coast makes for some of the most exciting scenic rides in Europe.

The northern European country of Iceland is known for having fascinating landscapes unlike anywhere else on the planet.

And among its many natural obscurities is the Landmannalaugar, a spectacular geological gem located in the southern part of the island.

The mountains and highlands that form Landmannalaugar feature a gorgeous palette of browns, caramels and greens, which twist and bleed into each other in the most spectacular fashion. 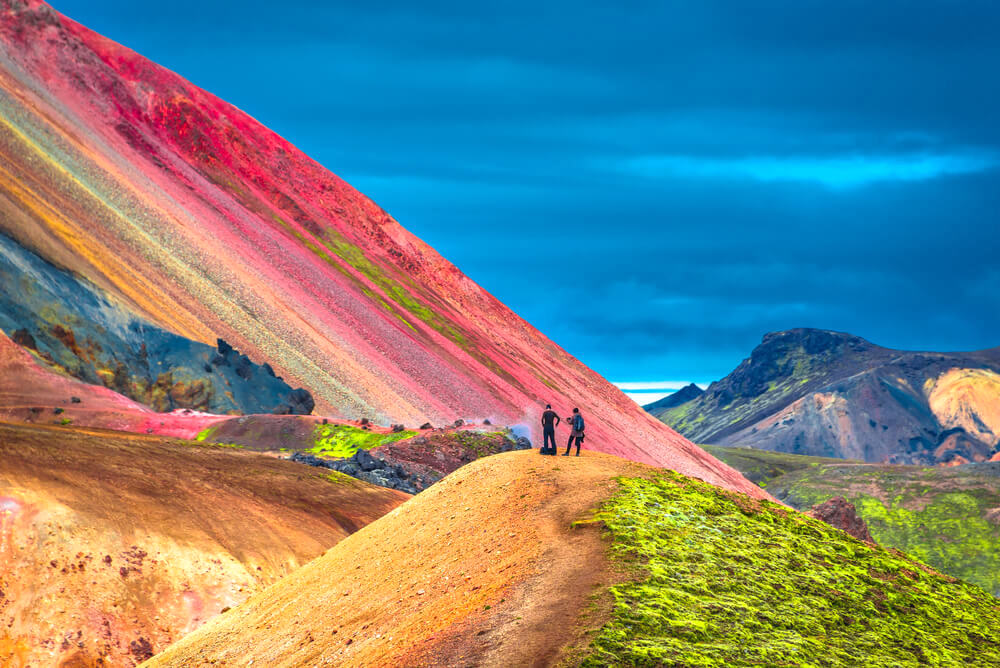 This highly pigmented effect is caused by a reaction between geothermal gasses and rare rhyolite rocks.

Among the most visited ones is the Douro Valley, a natural phenomenon formed by the one of the biggest rivers of the Iberian Peninsula.

This mesmerizing region, which has been declared a UNESCO World Heritage site, features seemingly endless terraced vineyards that cascade over the sloping hillsides.

Contrasted against the sparking blue waters of the river, the green terraces form a spectacular sight for the visitors who venture into the Douro Valley.

This area is also one of the most famed wine countries in Europe, where the aromatic Port is produced.