Take the Trans-Siberian Railroad to These Stunning Locations

Ah, the playgrounds of the rich and famous. The resorts on Lake Geneva, the beach adventures on the islands of Fiji, the massage pavillions at Seychelles, the luxury cruises around the Mediterranean Islands. Been there, done that? Seen one elegant spa, seem ‘em all?

Anyone can pay oodles of dollars to live like a rock star for a few days, but if you’re sick of the schtick, you might want to get real on the rail.

The last of the great transcontinental railways, and the longest in the world, the Trans-Siberian railway is 5,776 miles of railway stretching between Moscow’s Yarovlasky Station and the Vladivostock. It takes a minimum of a week to traverse.

One of the first things you should know if you’re planning a trip on the Trans Siberian railway is that there are three routes to choose from. The Trans Siberian classic goes from Moscow to Vladivostok, covering the whole 5,776 mile expanse. The Trans-Mongolian veers left at Lake Baikal, runs across Mongolia and ends in Beijing, and the Trans Manchurian skirts around east Mongolia, dips into the busy border town of Harbin in China, and also ends in Bejing.

The trip packages start at $85, the memories: priceless. Your trips will take you through breathtaking churches of hurl you through birch forests, deliver you across the seven steppes and through seven time zones in what is sure to be the wildest ride of your life. 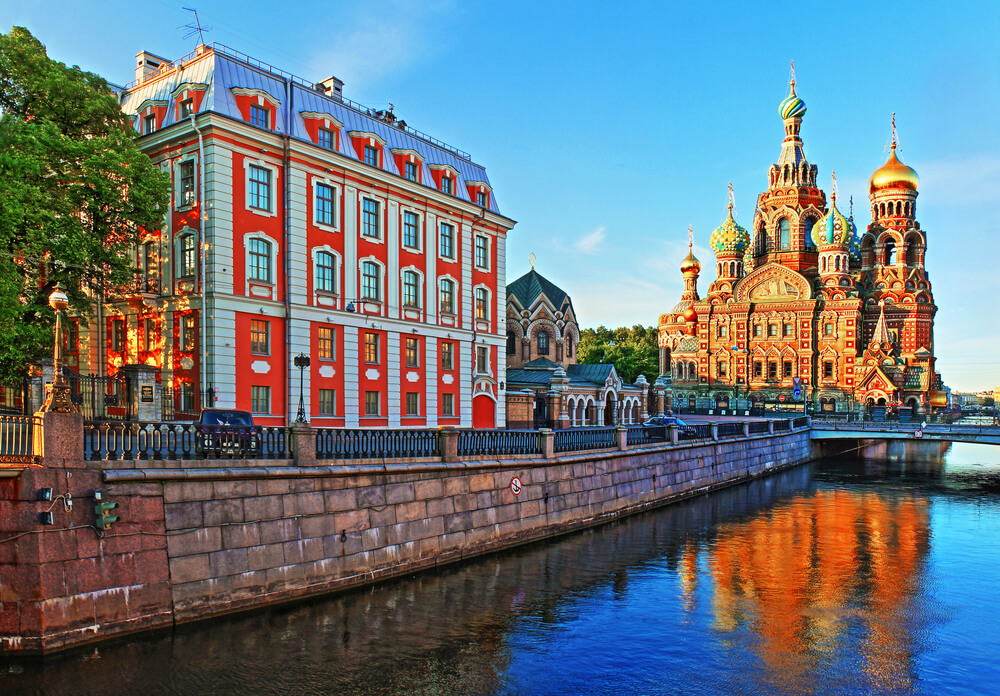 If your idea of a day at the museum is a little closer to the movie, “A Night at the Museum,” you are bound to appreciate the Kunstkamera. Founded by Peter the Great himself, this museum is a little more about morbid fascination than art appreciation.

Back in those days, people feared the weird. Anything that was anomalous to the norm was considered to be a creation of the devil. However, a fearless leader wants a country of fearless citizens, and Peter the Great was determined to be a leader of the brave. He commissioned the construction of the Kunstkamera as a place in which the abnormal was displayed in hopes of educating the people and thus relieving them of their fears. In fact, Peter even offered a reward to anyone willing to contribute to his den of abnormality. The result: one of the biggest collection of unborn fetuses, two headed deer, and large-headed unborn children ever. Not for the faint of heart, but then again, not much on this Trans-Siberian journey is. 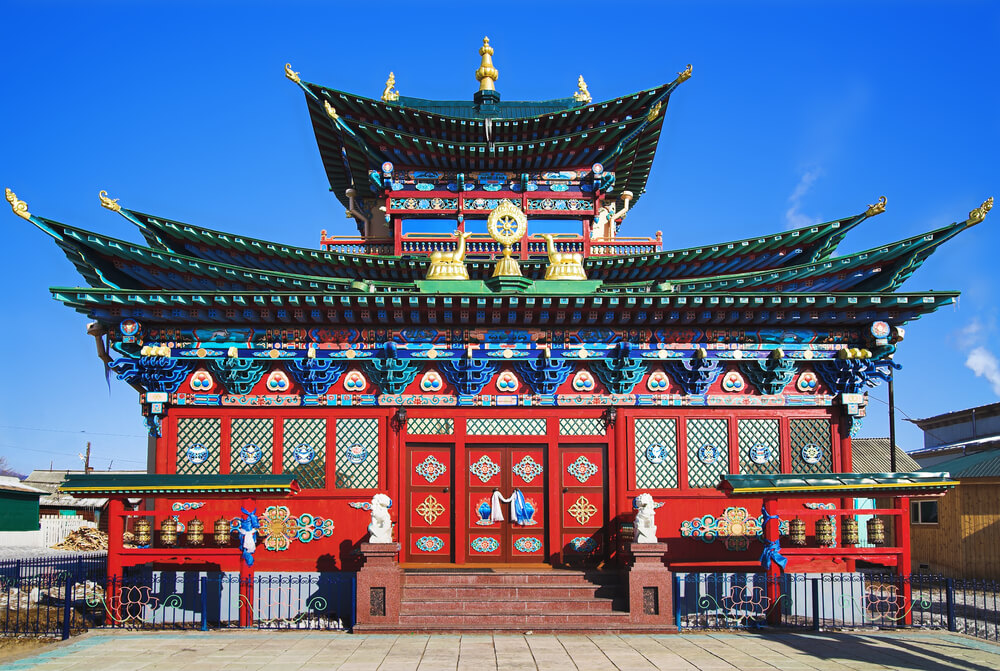 Nowadays, we all want to get in touch with our spiritual side. How about getting in touch with your Mongolian Shamanistic side? Ulan Ude in Buryatia Russia was first settled by the nomadic Buryat Mongols, following the split of the Russian organized church in 1650. The group of “Old Believers” were forced to flee their homes, and escape to Siberia to practice religious freedom, the animistic and shamanic ethnic religion of Mongolia. Ulan Ude provided this group with their new home.

However, just when the group believed they had found their religious haven, there was further shake up when, in 1900, the start of the locomotive revolution and the building of the Trans Siberian railroad turned their sacred ground when into a prosperous trading hub. Still, the Buryat Mongols kept their stronghold in the city where they continue to make up more than 20% of the population. Their cultural influence is just part of what makes Ulan Ude the interesting and diverse city it is today.

Other points of interest in Ulan Ude include the world’s largest Lenin head, located in the city square. You know what they say: “big head, big ideas…” 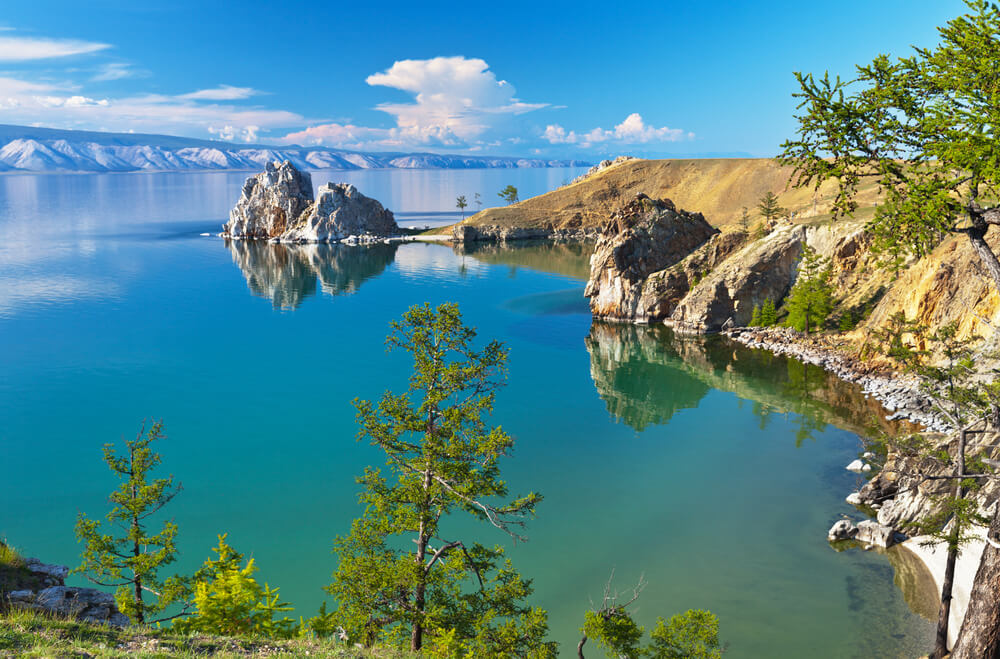 When most of us think of a trip to the lake, we expect a tranquil, experience; a chance to get someone on one time with nature, perhaps get in a bit of fishing. Rule 1 of the Trans Siberian railroad: Expect the unexpected.

You’ll find no relaxing day of fishing at Lake Baikal, in fact the fish you encounter here probably have very little in common to what you might call a day’s catch in your neighborhood fishing hole.

Lake Baikal is the world’s deepest and oldest freshwater lake, curving for 400 miles through South Eastern Asia, north of the Mongolian border, in a cleft at which Asia is about to split apart. According to geologists, if you want to get an idea of what the world looked like before the continents split apart, Lake Baikal is a pretty accurate representation.

With a maximum depth of 5,000 feet deep atop a four-mile thick layer of sediment, oxygen-rich Lake Baikal is home to some of the more bizarre aquatic life forms.

If your looking for fish of the edible variety, the golymyanka comes highly recommended by the seals. Geologists believe this semi-transparent pink fish that gives birth to live young is a holdover from the Mesozoic era, which, according to them, is just about when Lake Baikal was formed. Apparently, many of the golymyanka’s 20-25 billion-year-old friends make their home in the Baikal, too, and if your traveling on the Trans Siberian, you’ll want to make sure to pay a visit to them all.

Also of note is the Baikal’s backdrop. Surrounded by snow-capped mountains and self-reliant villages of the taiga, you’ll find the some of the vistas of unparalleled beauty that give the Trans-Siberian adventure its reputation for breathtaking glory. 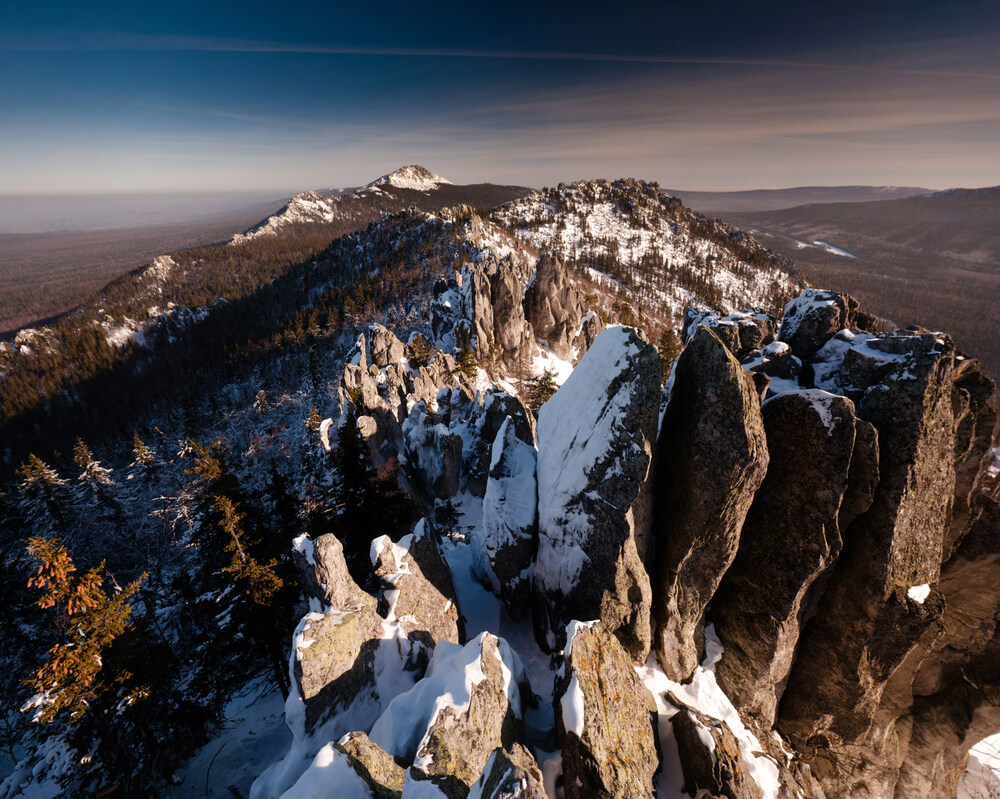 Fossils of 267-year-old crowned crocodile dinosaurs? Prehistoric, virtually invisible high-tech nanospirals? Forgotten stone idols? It’s just another day in the Ural Mountains. The Ural mountains are an ancient mountain range located in what most think of as the eastern boundary between Europe and Asia, but most are more interested in their creation than their location.

According to geologists, the Urals appeared over 300 million years ago in a collision between two islands, Eurussia and Kazakhstania, which no longer exist. To put this into perspective: while most mountain ranges form from the collision of two presently existing land masses, the Urals are formed of land masses that are no longer there, which makes them vestiges of tectonic activity that no longer exists, and a veritable treasure trove for archaeologists, geologists and tourists alike.

Gigantic stone structures, traces of lost civilizations, geographic anomalous zones, unexplained explosions, unanswered questions. it’s enough to take Indiana Jones out of his comfort zone. Does the M-Triangle really hold the presence of unknown forces? Could the Akraim really be the same village that reportedly burnt down 4000 years ago? Is the Patomskiy a natural creation made from an explosion of uranium and ore, or an artificial structure made by man? You’ll never know if you never go. Book your package today! 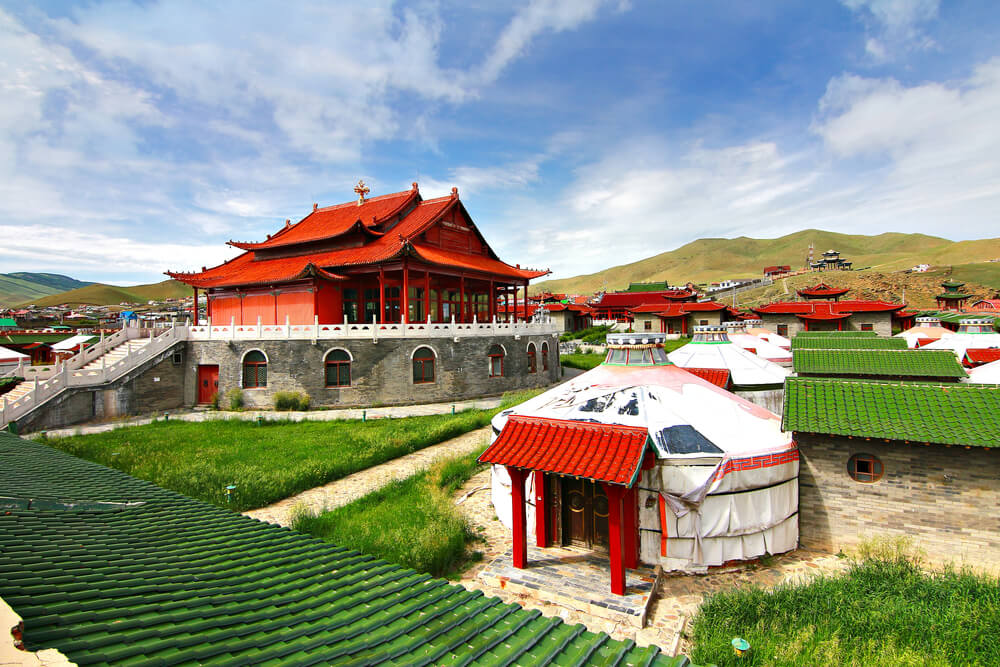 Things you should know before you go to Ulaanbaatar:

Just when you’re wondering if there are any civilized stops of the Trans-Siberian Railway, Ulaanbataar appears. Ulaanbaatar is a Mongolian city known for its nonstop traffic, nonstop nightlife, and nonstop industrial growth, with a bohemian underside that sets it apart from other modern cities. Here you’ll find upscale businessmen on their way home meeting up with punk rockers on their way to the nightclubs as Buddhist monks chant on the steps of Gandhad Kiid. Just be sure your GPS is working; the city is not known as a place for the uneducated navigator. Another word to the wise: dress in layers.

Another word to the wise: dress in layers. Ulaanbaatar is the coldest capital in the world, which means if you go in the winter you may not be able to party your butt off without freezing it off as well. Survey says: go in the summer! 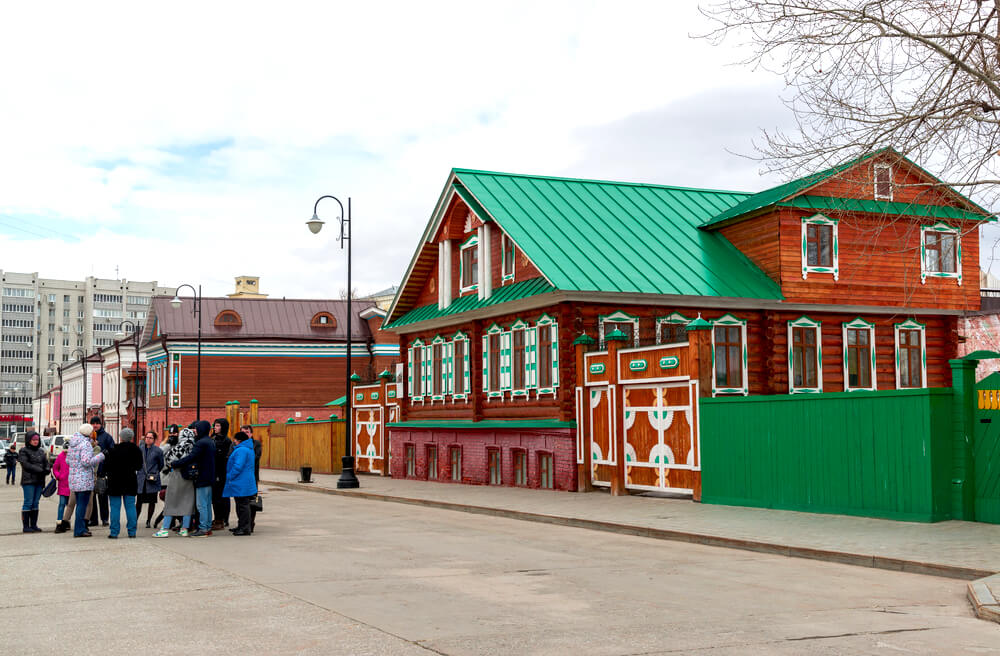 If Ulaanbataar sounds like a bit of a cultural mishmash, Kazan certainly is. In fact, the name Kazan means “cooking pot” in Tatar. Located along the Volga River, Kazan is 150 years older than Moscow, and the home of the Volga Tatars, a Turkish population associated with Genghis Khan. However, rest assured; Moscow has taken careful measures to ensure Kazan remains loyal to Russia, and the large Slavic Russian population in Kazan is largely responsible for the cultural conflux that makes Kazan so interesting.

While the cooking pot of culture may be enough of an attraction for most, it is the actual attractions in Kazan that may be the most intriguing.

Let’s start with the Chak-Chak Museum. If the idea of a museum dedicated to food is something of an anomaly to you, let’s just chalk it up to Kazanian pride. The Chak-chak Museum is an interactive museum dedicated to the sweet balls of honey-baked dough that has been the comfort food which sustained the Tatar people for so many years. Learn to bake, learn to appreciate, and Prijatnogo appetita! Make reservations ahead of time, these things are going like hotcakes!

Looking for some more offbeat ways to spend your days in Kazan? How about a trip to the Soviet Lifestyle Museum? Here, you’ll find novelties including a leather jacket made of 120 Communist party cards, made by a loving father for his daughter during hard times, a cockroach trap that works by attracting the bugs with beer, and then dousing them in boiling water, ( at least they’ll have something to lessen the pain), a high voltage mouse trap,(no mercy here) a drinking tumbler that can balance on its bottom edge, (ideal for the less experienced drinker), and a blade sharpener made from a 1980’s cassette player.

Of course, there are many more serious sites to be seen in Kazan, the Kremlin for one, 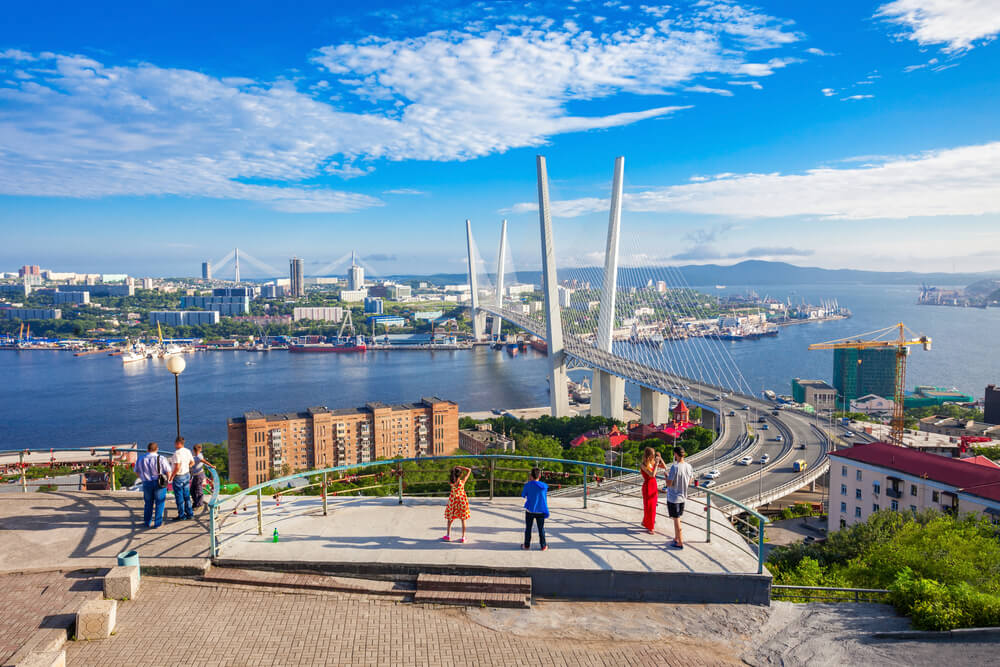 If you really can’t resist a vacation without a stop in an exotic island, Vladivostok fits the bill. Located in the very Far East of Russia on the Pacific coast, Vladivostok, is noted for its sandy beaches and verdant islands. However, the beaches here are not so paradisiacal. In fact, you can expect to find boats trolling the water to pick up the excess of debris that has accumulated in the industrialized trading port and naval base, environmentalists, beware!

However, the waters of Vladivostok are not the only thing polluted in the city, so are some of the minds, and if yours is too, you’ll definitely want to check out Museum 18+. You can use your polluted mind to fill in the details.

Getting There is Half the Fun

While there are some destinations that defy the imagination along the Trans-Siberian Railway, it should be mentioned the biggest attraction is the trip itself. It is not unusual to find Trans-Siberian passengers prepared with enough food (and vodka) to feed an army, and the biggest insult to them will be your refusal to partake in the festivities. Within minutes of boarding the train, passengers will begin unwrapping blankets filled with meats, cheeses, cookies, and pastries, and there may be no better way to sample the local culture and if you don’t expect too much in the way of luxury, you should be fine.

Encounters with drunken passengers, alcohol-fueled stewardesses, and long lines for charging electronic devices come with the territory on the Trans-Siberian. One woman tells of her unfortunate experience of a vomit-filled cabin and a father coming down with pneumonia.

While there are more luxurious options, like the superluxe Golden Eagle Express, with amenities such as a private bathroom, powerful shower, and underfloor heating, what you’ll gain in comfort you may lose in experience. Who needs heat anyway, when there’s so much warmth on board?