The architecture that you will find in Taiwan is diverse, with everything from prehistoric stilt housing to postmodern design. For architecture buffs visiting the country, here are a few of the structures that you simply have to see.

Taipei 101
Taipei 101 is a truly iconic part of the city of Taipei’s skyline, and many would consider it to be the most famous building in the entire country. Its main standout feature is its height, as it measures an incredible 509 metres, and was, for six years, the tallest building in the world, until the Burj Khalifa Tower in Dubai took over in 2010. While Taipei 101 may boast an exquisite postmodern style of architecture, you can still see plenty of traditional Chinese elements within it, making it beautifully unique to the city.

The World Games Stadium
Built in 2009 for the 8th World Games, the World Games Stadium in Kaohsiung is famous for being the largest solar-powered stadium in the world, and can be run completely by solar power. The roof features more than 8000 solar panels, and, over the course of a year, can produce enough energy for 80% of the power needs of the surrounding buildings. Since the stadium itself does not need so much power throughout the year, the excess power generated is sold off. 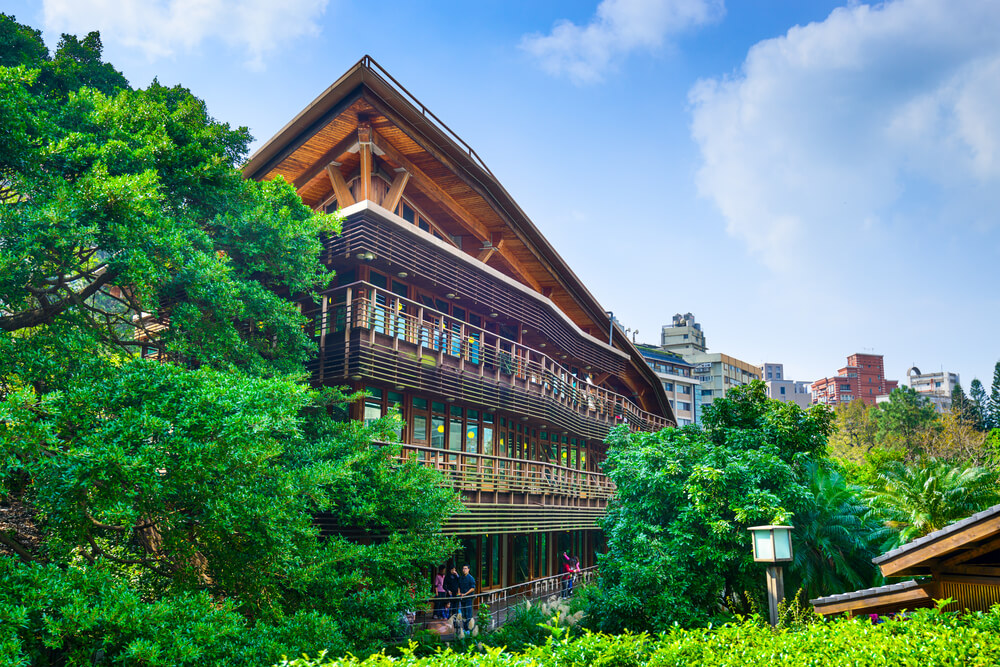 Beitou Library
Taiwan has been pushing for more green architecture in recent years, and the Beitou Library, which can be found in Taipei, is considered to be one of the greenest buildings in the country. With walls made out of American wood, but reminiscent of colonial Japanese architecture, and large windows that allow the natural light to seep deep into the building, this is a structure that will impress you straight away. The building also boasts a green roof, as well as low-maintenance vegetation, a method to capture rainwater, and a design that keeps the building naturally ventilated in the winter, but cool during the hot summer months.

Sun Moon Lake Visitor Center
Located in Nantou County, the Sun Moon Lake Visitor Center was completed in 2003, with the architect, Norihiko Dan, having won an international design competition for the honor of creating this masterpiece. This structure aims to mimic the relationship between man and nature, and with its gentle curves and ramped roofs, seems to almost be growing out of the landscape that surrounds it. All of the building’s roofs are green and can be walked on, while different parts of the building itself frame the stunning view all around. The reflective pools that surround the building mirror it in an impressive way, and almost seem to form a part of the lake that is just nearby, once again creating a connection with the natural landscape around it.

Taiwan has long since been pushing the boundaries when it comes to architecture, and many of its buildings have several awards behind them. From the sustainably green Beitou Library to the impressively tall Taipei 101, the architecture that you will see in Taiwan will no doubt provide you with so much inspiration.