Sacred and Religious Sites in Puebla

With the city of Puebla, Mexico being founded in 1531, it comes as no surprise that the region is home to a multitude of religious and sacred sites. From the majestic Puebla Cathedral that was 300 years in the making to the lavishly decorated Capilla del Rosario, each of these sites are considered to be extremely significant to the city.

Puebla Cathedral
The Puebla Cathedral is definitely impressive, and took an incredible 300 years to complete, although this was partly due to a number of interruptions that occurred during its construction. The second largest cathedral in the country, the Puebla Cathedral boasts the tallest twin bell towers in Mexico, one of which is open to the public to climb, with rewards of spectacular panoramic views across the city, as well as its surrounding volcanoes. For those who want to delve even deeper into local customs, it is possible to attend mass inside the church, which is held every Sunday at 10 am, and will give you the opportunity to experience the cathedral in its full functioning glory.

Iglesia de Santa Domingo
The Iglesia de Santa Domingo was built in 1611, and was originally the church of a Dominican monastery. While the monastery may no longer be active, the church of Santa Domingo still stands strong, and visitors flock to the site to take a look at its most popular attraction, the Capilla del Rosario. This church is one of the most elaborately decorated in the country, and many would say the most beautiful, with its walls covered in intricate sculptures and gold leaf, and golden vines that frame six historic paintings, making it feel as though you are standing in a living rosary.

Choloula
On the outskirts of the city of Puebla lies Choloula, which is a significant town due to the fact that, in pre-Columbian times, Choloula was the religious capital of highland Mexico. While the hundreds of temples that stood in the area were destroyed by the Spanish, the Great Pyramid, a sacred landmark, remains. This site is open to the public every day of the week, and is only a 15 minute drive from the heart of Puebla. In addition to the pyramid, other religious sites in Choloula worth visiting are two of its magnificent churches; Tonantzintla and San Francisco Acatepec. 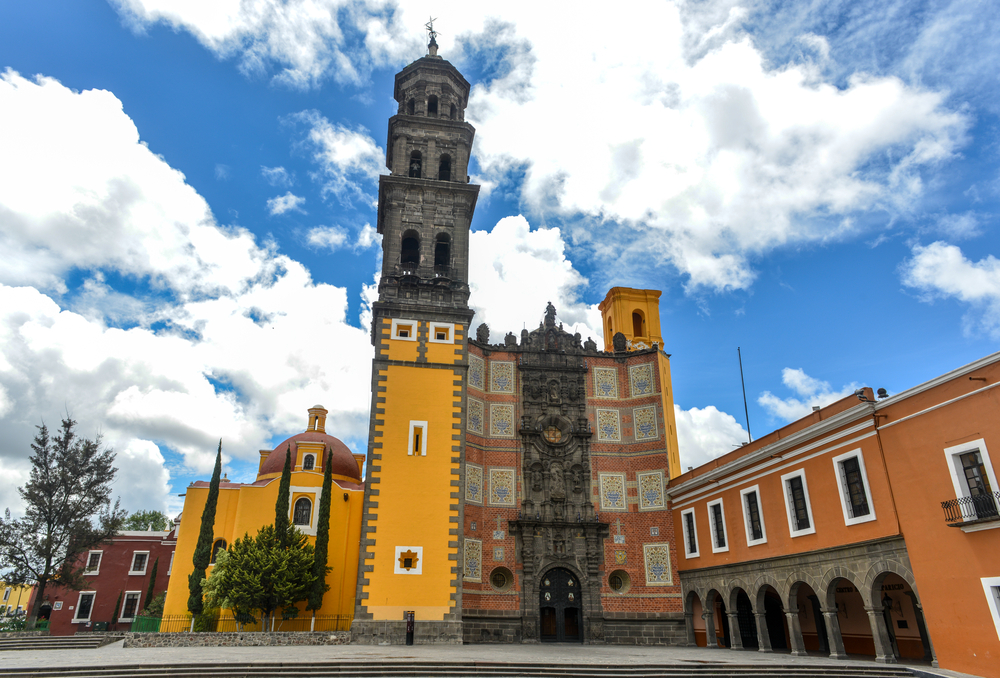 Templo de San Francisco
The Templo de San Francisco can be found in the oldest part of the city, in the Historic Center of Puebla, and dates all the way back to 1550, when it was a primitive monastery. The structure’s exterior features sculpted cantera stone, along with stunning tile work, while its interior is where you will find the mummified body of Sebastian de Aparicio.

Puebla is home to a multitude of religious and sacred sites, and each of these have played a role in the development of the city over the years. For those who do not have much time in the city but still want to experience its most sacred features, a guided tour that focuses on Puebla’s history and culture would be your best option.