The Best Museums to Visit in Mexico City

Mexico City is home to more than 150 museums, which can make choosing between them quite a difficult task.

From iconic art to natural history, here are eight museums that you should definitely visit in Mexico City.

Well then you will definitely love this museum, which tells the story of Mexico’s ethnic and cultural diversity largely through interactive exhibits.

The museum itself was founded in 1982, at a time when Mexico was trying to promote and encourage cultural diversity.

The exhibits here vary hugely, with everything from folk art to altars from Day of the Dead celebrations. The museum is also especially popular during the various holidays through the year, as their seasonal exhibits, whether this may be for Christmas, Easter, or Day of the Dead, are always impressive, and are usually accompanied by outdoor performances and markets.

Unlike the other museums on this list, the Museo de Culturas Populares does not have a large permanent exhibition, and instead focuses on their temporary exhibits.

Thanks to the fact that this museum features such vibrant and interactive displays, it can get quite busy on weekends and during the holidays, with most of the crowds tending to consist of families with children.

Wondering how much time you should set aside for a visit to this museum?

Well, this is quite a small museum, so around an hour and a half should suffice. However, if you plan your visit for a quieter time, then you will likely be able to get quite engrossed in some of the exhibits, so schedule yourself a little longer. 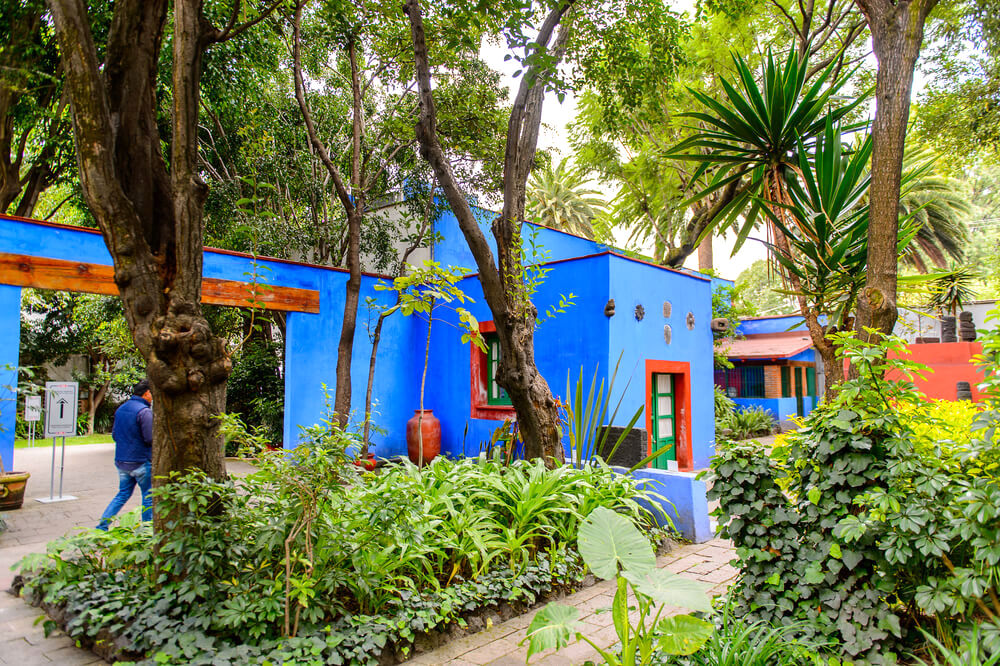 One of the most popular museums in Mexico City, Museo Frida Kahlo is dedicated to the legendary artist herself.

In fact, the house that the museum is in was the home in which Frida Kahlo was born in, raised in, and lived in until she died. It was the same home that she shared with her husband, Diego Rivera, who was also an artist, with each room making you feel as though you have literally stepped in to one of Kahlo’s paintings.

The museum, which is also known as The Blue House, is home to some of Kahlo’s most famous paintings, including:

While there may not be quite as much of Kahlo’s work within the house as you would expect, the other artefacts that belonged to her, from diaries and mirrors to clothing and her bed, make this experience more than worthwhile. You will even find more unique artefacts here, from the artificial leg that she wore to her actual ashes to a handwritten recipe for her mole sauce, which makes the museum feel like such a personal one.

Wondering how long the museum has been around?

It was turned into a museum in 1858, four years after Kahlo’s death.

When it comes to deciding when to visit…

Weekdays are best, as the museum tends to get quite busy on weekends. However, having said that, the queues at the entrance are pretty crazy no matter when you choose to visit. To get around this, buy your tickets ahead of time, as this enables you to skip the queue.

The museum is home to a quaint cafe, set within the house’s beautiful gardens. With freshly made meals available, this is the perfect place to stop for a bite to eat.

Did you know that Cacao is actually native to Mexico, and was first domesticated in Mesoamerica?

While this museum may not be as well-known as some of the others on this list, MUCHO is slowly increasing in popularity, thanks to the fact that this museum is entirely dedicated to chocolate.

This is a small museum, and won’t take longer than an hour to explore. However, the exhibits are definitely captivating, ranging from historical information to interactive exhibits, where visitors can taste different types of chocolate.

In addition to its permanent collection, the museum also hosts temporary exhibitions throughout the year, and, as you would have probably guessed, these are also always chocolate-related.

Want to delve deeper into the world of chocolate?

The museum regularly hosts a variety of different workshops, for both adults and children, such as: 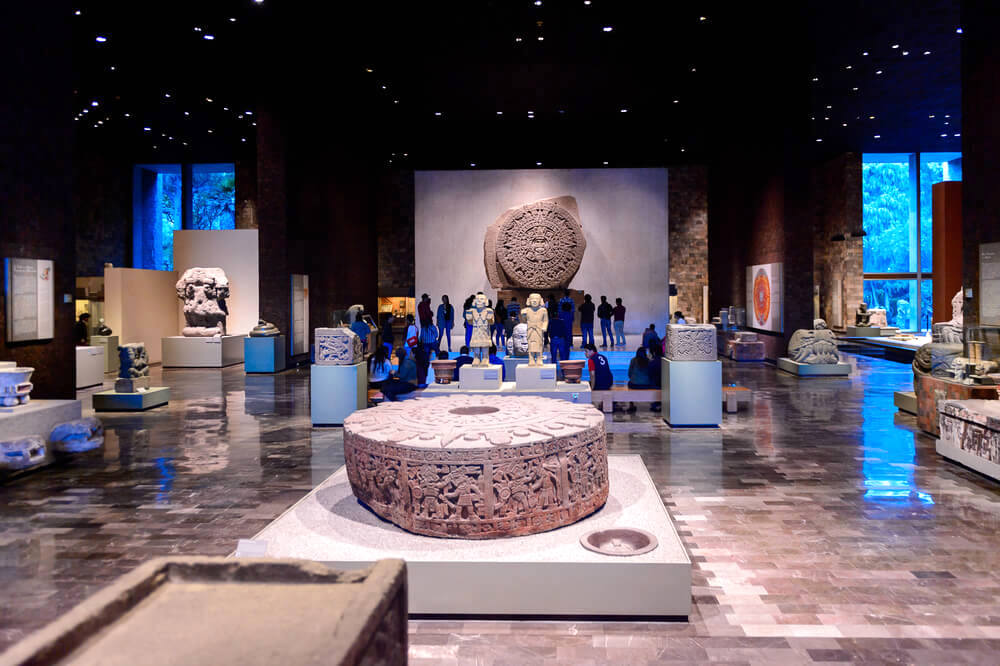 Interior of the National Museum of Anthropology | © Anton_Ivanov / Shutterstock.com

Many would consider the Museo Nacional de Antropologia to be the best in Mexico City, if not the world, and it is easy to see why.

The architecture of the building itself makes the museum look so avant garde, even though it was designed way back in 1964, making it easy to see why some visitors flock here for just the architecture alone.

Wondering what this museum is home to?

It contains the largest collection of ancient Mexican artefacts in the world.

The museum’s permanent collection is spread over 23 rooms in 10 buildings, but, with so much information to take in, you will likely need more than one visit.

Only have a few hours to spare?

Don’t worry, here are a few of the museum’s highlights that you should make a priority:

If you don’t want to navigate this huge 4100 square meter museum on your own, there are guided hour-long tours offered on Tuesdays to Saturdays, where you will see the most important exhibits in the museum.

Want to know where to eat around the museum?

The museum does have a restaurant that serves up both local and international dishes, but there are better restaurants to be found nearby in Polanco.

Here are a few to try:

But although the Museo de Arte Popular focuses on art, it will also teach you quite a bit about Mexico’s history too, and how the arts have had an impact on this.

As you can tell from its name, which means the Folk Art Museum in English, this is a museum that displays a diversity of folk art and handicrafts, many of which have been made by Mexico’s indigenous people.

In addition to the permanent exhibits here, from pottery and paintings to textiles and pinatas, there are also usually two or three temporary exhibitions also running. These are usually handicraft-focussed, whether this may be depicting a particular craft or highlighting a certain textile.

This is quite an obscure and eclectic museum, and provides such an immersive insight into a side of Mexico that many do not get to experience.

Want to know when to visit?

As with the majority of museums out there, weekdays tend to be much quieter than weekends. During the weekends, the museums host workshops for children, so expect to see large crowds.

Wondering how long you will need to explore this museum?

About an hour, but don’t forget to save enough time to visit the gift shop too. This shop features handicrafts created by artisans from around the country, promoting their work while helping to encourage fair wages. 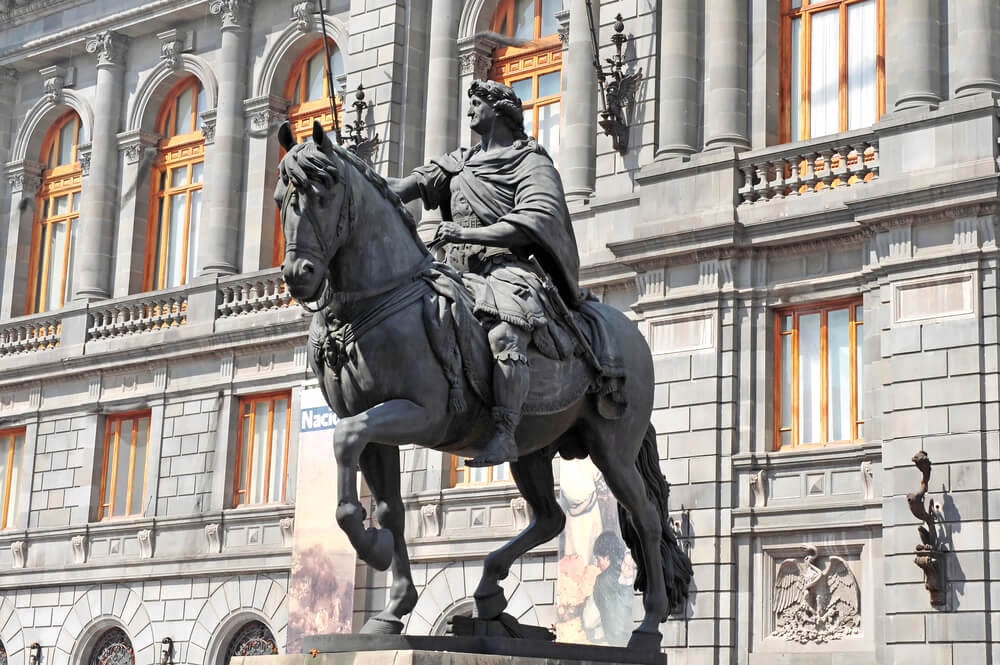 Also known as the National Museum of Art, the Museo Nacional de Arte is another museum that attracts visitors simply for its architecture alone.

What’s so great about it?

The building that the museum is housed in used to be the Communications and Public Works Palace, one of the most beautiful examples of early 20th century Mexican architecture.

There are more than 3000 pieces to see in the museum’s permanent displays, as well as several more in temporary exhibitions, making this a museum that you should allocate a good few hours to.

What type of art is the museum home to?

The museum tells the story of the history of Mexican art, from the mid-16th century to the mid-20th century.

For those of you who prefer modern art, then the Museo de Arte Moderno, also known as the Museum of Modern Art, should definitely be on your to-do list.

Just like the Museo Nacional de Antropologia, as well as several other museums in the city, the Museum of Modern Art was created in the 1960’s, when the city was going through a period of becoming extremely cosmopolitan.

Today, the museum is home to one of the most important collections of 20th century art in Latin America.

Wondering which artists have pieces in this museum?

Quite a few big names, such as:

Their pieces consist of so many different mediums, from paintings and sculptures to photography and video installations, adding so much variety to your experience.

The exhibits themselves change regularly throughout the year, meaning that you always have something new to look at with each visit.

When it comes to the museum’s temporary exhibits…

These tend to promote young and emerging Mexican artists, and there are always quite intriguing pieces of art to see here.

While visiting, don’t forget to check out the museum’s outdoor sculpture garden. There are some truly awe-inspiring pieces here, as well as the museum’s cafe, providing the perfect spot from which to take in your incredible surroundings. 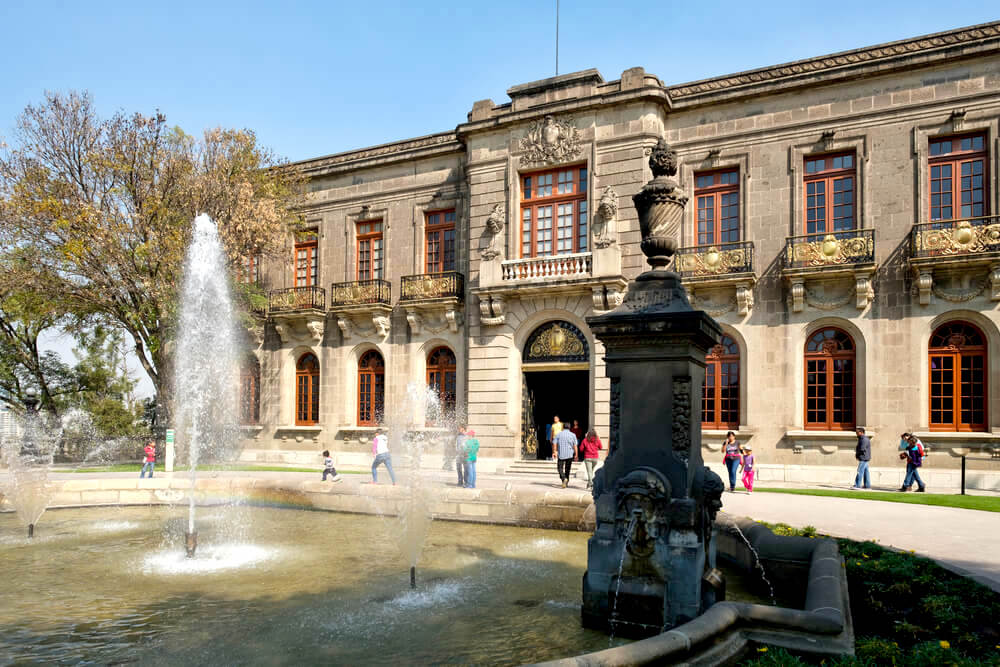 This is another of Mexico City’s museums from the 60’s, and is located inside the impressive Chapultepec Castle. This castle is built atop a hill that used to be sacred Aztec ground, but then became a presidential residence, until it was given to the country in 1944 to become a national museum.

In addition to being home to a museum, this castle also boasts some exemplary Mexican architecture, as well as beautiful gardens and panoramic views over the city, thanks to its location on Chapultepec Hill.

For those who want to learn more about the history of Mexico, this is the museum to go to…

You will find everything from artwork and furniture to costumes and technology here, with the eclectic collection telling you the story of Mexico’s past, right from the conquest of the Aztecs to the 20th century. You will likely notice a religious theme running through many of the exhibits, highlighting how important religion was to the people of Mexico.

The museum is also home to a few large murals, and these will teach you about certain periods of time, such as the fall of the Mexican Empire.

From history and culture to art and chocolate, Mexico has so much to offer the world, and these museums are the perfect way to learn more about the country’s unique highlights.

Ready to head out and explore some of these museums?

Many of these museums are closed on Mondays, so be sure to check opening days and hours before planning a visit.