Discover These Natural Wonders of Asia

While Asia may be synonymous with tropical beaches and colorful coral reefs, there is so much more to the continent than this. From soaring mountains to bamboo forests, here are some of the top natural wonders that Asia has to offer.

The Son Doong Cave in Vietnam was only discovered in 1991. Considering that this is the largest cave in the world, this is quite surprising, but, nevertheless, it has recently opened up to the public, meaning that you can now visit this natural wonder that was hidden for so long.

The cave’s name means Mountain River Cave, due to its proximity to a river, and the fact that the cave itself was created by water eroding through the limestone, creating a large tunnel.

This tunnel continued to expand over the years, resulting in caverns that are now large enough to fit an entire city street in.

Being over 150 meters in height, and 200 meters in width, the cave was believed to have been created up to five million years ago, and even has its own river, as well as a forest that grows within the middle chamber. 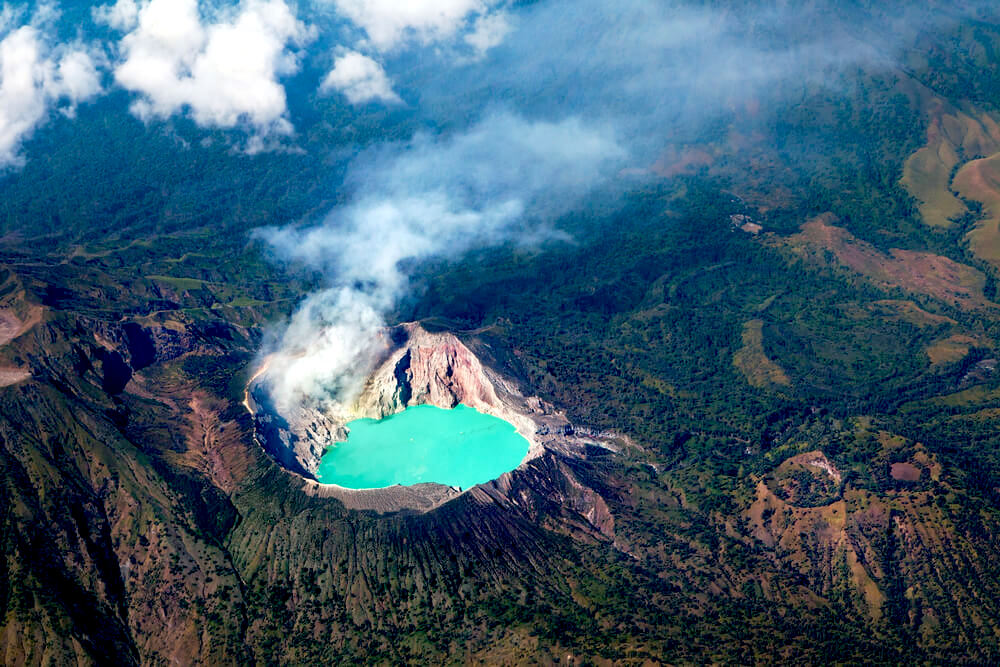 Located in East Java, the Ijen Volcano Complex consists of a collection of stratovolcanoes, which are all located inside a large volcano crater, referred to as a caldera.

So what makes this complex so special?

A couple of different things…

The first is the Ijen Volcano itself, which boasts the largest acidic crater lake in the world. Due to this high level of acidity, the water within the lake is a surreal milky blue, and while you may want to stand around admiring it for a while, the strong smell of sulphur will likely chase you away quite quickly.

Another unique feature of this complex can be found in the Ijen crater. Due to the continuous combustion of sulphuric gases, the crater itself grows an eerie shade of blue.

When gasses emerge from the volcano, they do so at an extremely high temperature and pressure. This means that when they come into contact with the air, they ignite, sending burning blue flames five feet into the air.

What makes this even better is…

As the flames continue to burn, the gasses condense into liquid sulphur, and begin to flow down the slopes of the volcano, giving off the illusion of blue lava.

With over 130 million years of history behind it, Taman Negara is the oldest tropical rainforest in the world.

Covering an area of around 4343 square meters, this national park is one of the country’s biggest attractions, and for good reason too.

There are many ways in which you can explore the rainforest, as well as numerous routes that you can take, but the most famous canopy walkway, which also happens to be the longest of its kind in the world, is located 45 meters up in the canopy, and will provide you with views that you will never forget.

Of course, being one of the most popular tourist attractions in the country, Taman Negara can get quite crowded, even with its large size.

That being said, heading to the park early will enable you to avoid most of the crowds, especially if you are heading to Lubok Simpon, which is the local wild swimming spot.

Japan is famous for its thermal hot springs, also known as onsens, and while these can be found all over the country, one must-see area is the Jigoku Valley.

Because this region has really embraced all of the hot springs that can be found around it, setting up boardwalks that allow people to leisurely meander through the many geysers and steam caves.

There is so much to see, with each onsen having its properties when it comes to healing. While it is worth taking a dip in all of them, make sure that you do not miss out on the Oyunuma Brook, which is a natural foot bath that you will find in the area. 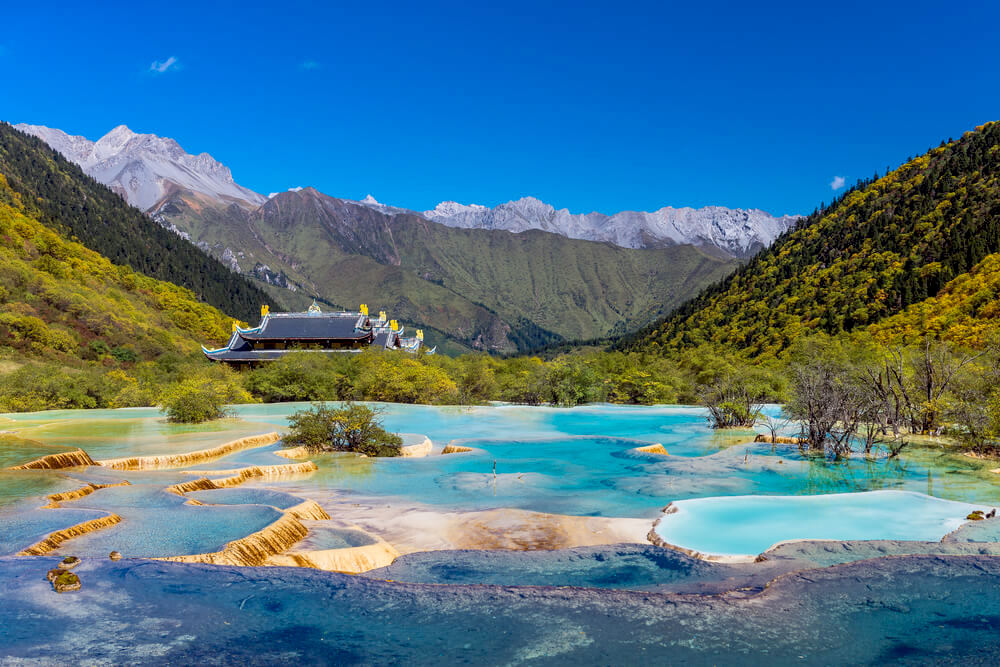 Designated a UNESCO World Heritage Site in 1992, the Huanglong National Scenic and Historic Interest Area can be found in the Sichuan region of China.

The landscape here is quite a unique one, with one of the highlights being the colorful calcite terraced pools found all around.

The area also boasts a diverse forest ecosystem, with a number of different habitats that provide homes for endangered animals, as well as plants. One example of this is the giant panda, which calls this region its home. These forest ecosystems are relatively undisturbed, giving you the perfect opportunity to really soak up some nature.

In addition to the terraced pools and the forests, you will also find snow-capped mountains, hot springs and waterfalls, as well as various temples and statues scattered around the area.

Located in the Indian Ocean, just south west of India and Sri Lanka, the Maldives consists of over 1000 islands, as well as 26 atolls, and is famous for being one of the top vacation destinations in the world.

Here are just a few of the reasons:

The Natural Forest Park of Zhangjiaje, which is a UNESCO World Heritage Site, in China is one that you will have likely already seen photos of. If you have not, then you will probably recognize it from the movie Avatar.

Because these surreal rock formations are what provided the inspiration for the one-of-a-kind landscapes of Pandora.

In fact, in honor of the movie, one of the rock formations has even been renamed as Avatar Hallelujah Mountain.

So, enough about the movie, what exactly are these rock formations?

They are basically quartzite sandstone columns, with many of them being over 200 meters in height. There are thousands of these columns, 3544 to be precise, as well as a number of caves that are filled with stalactites and stalagmites.

The pillars themselves formed over thousands of years, due to erosion and water that expanded and contracted in the crevices of the rocks.

The village of Kuantan, in Malaysia, is not only known for its sandy beaches and turquoise waters, but is also famous for another natural wonder, this time involving the animal kingdom…

Each night, the sky lights up with thousands of fireflies, who gather in the mangrove trees to feed and attract a mate.

The best way to really experience this natural wonder is to take a boat ride, which can be chartered at the town’s jetty. Each boat holds four passengers, meaning that you can tailor the ride to be as long as you want.

However, keep in mind that photographing the fireflies with a flash camera is prohibited, n order to protect them. 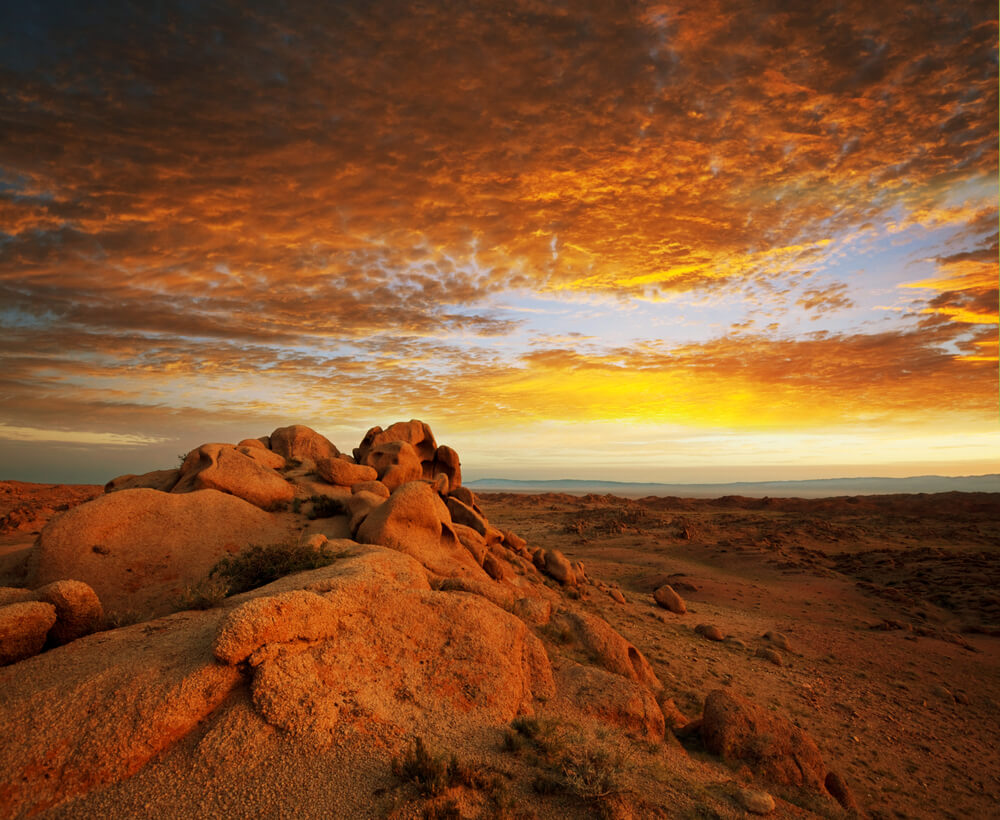 The Gobi Desert stretches across most of the south of Mongolia, as well as its border with China, and is definitely a destination for your bucket list.

This is the largest desert in Asia,  covering an arc-shaped area of land that measures around 1.3 million square kilometers.

There are a number of different ecosystems within the dessert, from grasslands to mountains, and, because it sits at quite a high altitude, is actually quite a cold desert, with snow falling on the sand dunes in the winter.

While you may think that the entire desert is filled with sand, only 5% of the Gobi desert contains sand dunes. The rest consists of rock or dry grasslands.

Quite a few things:

Just like Mount Everest, K2, which is also known as Mount Godwin-Austen, is also located in the Himalayas, but this time on Pakistan’s side of the border.

Standing at 28,251 feet above sea level, K2 is the second highest mountain in the world, and is actually considered to be far more dangerous than Everest. With a number of different climbers having fallen to their deaths here, K2 has earned itself the nickname of Savage Mountain.

So, why exactly would you want to give this mountain a climb?

Well, to begin with, it is known for having some of the most incredible views in the world.

It has also only been scaled just over 850 times, compared to Everest, which has been climbed over twice that amount. If you want to take on one of the toughest mountains in the world, but prefer to take a path less travelled, then K2 is the one for you.

Of course, if K2 gets a mention, then Mount Everest should as well.

While there may be no denying that Everest is the highest mountain in the world, many people have argued for decades over its actual height, although it is believed to be around 29,028 feet tall.

Everest is actually located on the border of Nepal, China and Tibet, and is a mountain that is over 60 million years old. It is also contained within the Sagarmatha National Park, which is home to three of the seven highest mountains in the world, as well as many other prominent peaks that exceed 6000 meters in height.

Tempted to give Everest a climb?

There are 18 different climbing routes to choose from, with the journey taking about 40 days in total. But, as you can imagine, there is so much training that needs to go into this expedition beforehand. This usually takes at least a year, so long as you have a solid fitness level to build up from. Nevertheless, even if you only pay a visit to base camp, this will still be one of the most rewarding destinations you will ever visit. 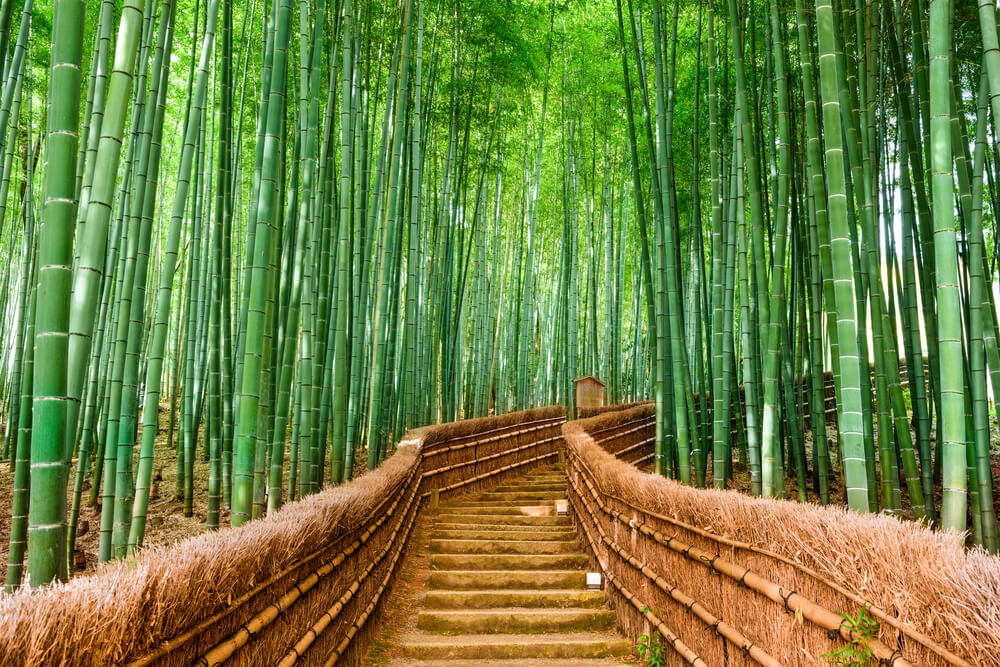 Chances are that you have already seen numerous photographs of Kyoto’s Bamboo Forest, as many would agree that this is one of the most beautiful forests in the world.

Located just thirty minutes outside of the heart of the city, the forest provides a shocking contrast to the urban environment all around it.

What can you expect to see?

Tall bamboo stalks soaring dozens of feet into the sky, packed together incredibly densely. There are wooden paths that twist their way through these groves, so you can explore the forest comfortably at your own pace.

But that isn’t even the best part…

When the wind passes through the tightly packed trunks, making the wood creak and the leaves rustle, the sound that is created is so incredibly peaceful.

Even Japan’s Ministry of the Environment would agree with this, including the forest in the list of 100 Soundscapes of Japan, acknowledging the meditative effect that this sound can have.