Referred to by many as the world’s loneliest tree, the Tree of Life is a majestic mesquite tree that stands alone in the heart of the desert in central Bahrain. While nobody may yet understand the mystery that lies behind the tree’s survival, it has become a one-of-a-kind landmark that is visited by over 50,000 people each year.

433 Years Old
From local stories, scientists have discovered that the tree was planted in the desert in 1583, making it 433 years old. While there is no other sign of life around it, the tree itself is perfectly healthy, with a dense canopy of fresh, dark green leaves, and stands at an impressive 32 feet tall. The tree’s water source remains a mystery, but trees from this plant family are known for having incredibly long roots, leading scientists to believe that the Tree of Life has roots that travel kilometers away to where a sweet spring lies. The air in Bahrain is also extremely humid, and the mesquite tree is a plant that is well adapted when it comes to obtaining moisture from the air, which could be another explanation as to its water source. 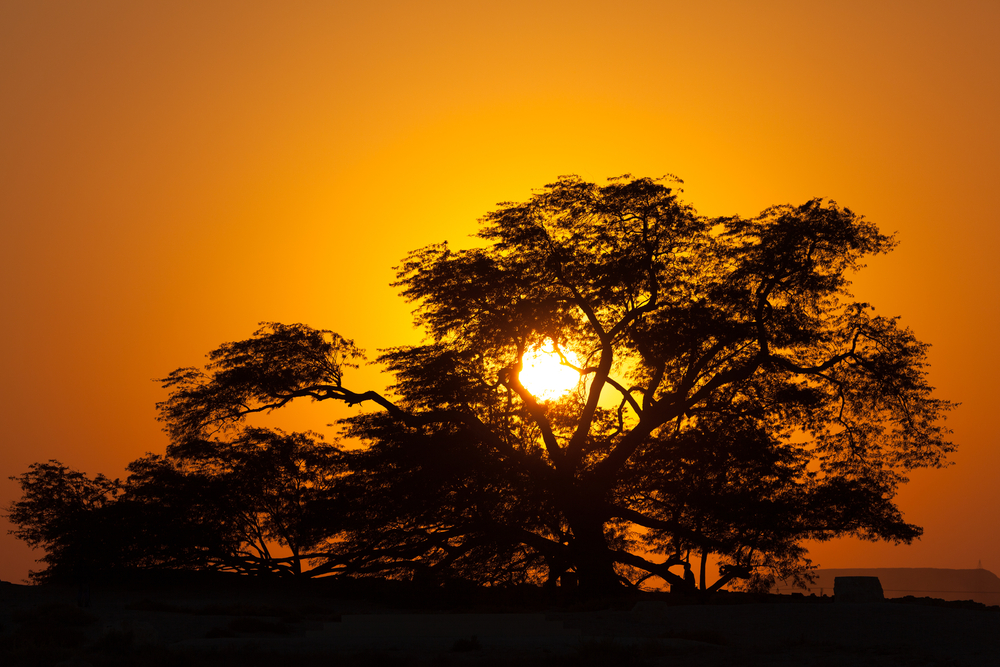 Visiting the Tree
The Tree of Life is an attraction in itself, and, due to its geographical isolation, you are best off hiring a car or booking yourself a return taxi ride, as you will not find much else in the area. It takes about 45 minutes to drive to the Tree of Life from Manama, and while there is quite a bit of soft sand, there is no need for a four wheel drive. Sadly, after the tree was damaged by graffiti, a large circular fence had to be put up around it, which is referred to as the Tree of Life Visitor Center. In addition to protecting the tree, the center will also be displaying the various archaeological artifacts that have been uncovered in the area since 2010, and will also have a small stage for one-of-a-kind outdoor events and performances.

Jebel al Dukhan
Located just two kilometers away from the Tree of Life is Jebel al Dukhan, also known as the Mountain of Smoke, making it well worth combining a visit to both of these attractions. Jebel al Dukhan is known for being the highest point on the island of Bahrain, standing at 440 feet. While you may think that this would mean a challenging hike up to the peak, the climb is actually quite gentle, and only takes about an hour, although you will need to bring plenty of water as there is none to be found on the hill.

In addition to being famous for its mysterious survival, modern scholars have also pointed to the area in which the Tree of Life lives as being the location of the Garden of Eden, with quite a number of ancient sources available to back this up. Whether or not this may actually be the case, when visiting this natural wonder, it is certainly easy to believe that there is a special force behind its survival.