A Walk Through the Mestizo District

Located in the city of Vigan on the west coast of Luzon island, the historic Mestizo District, also known as Calle Crisologo, stands out for the way in which it manages to beautifully merge Chinese and Spanish aesthetics. A designated UNESCO World Heritage Site, taking a walk through the five blocks of the Mestizo District is the best way to truly soak up its unique ambiance.

The Architecture
The colonial-era architecture all over the Mestizo District is usually what first captivates visitors, as all of the magnificent mansions and ancestral homes have been wonderfully preserved. With Chinese merchants being the first to settle in the area, and soon becoming the city’s elite, and then the Spanish colonizing the city later on, both of these cultures have had huge influences on the designs and styles of the architecture you will see. From stone walls to capiz-shell windows to leafy inner courtyards, the merging of Chinese and Spanish styles makes the Mestizo District architecturally unique. Most of the mansions here are now private homes, but there are a couple that are open to the public to tour, and still feature original decor and furnishings. From the Syquia Mansion, that used to be the home of the sixth president of the Philippines, to the Quema House, both of these houses will provide you with a great insight into what the interior of a Chinese-Spanish home would have looked like at the time. 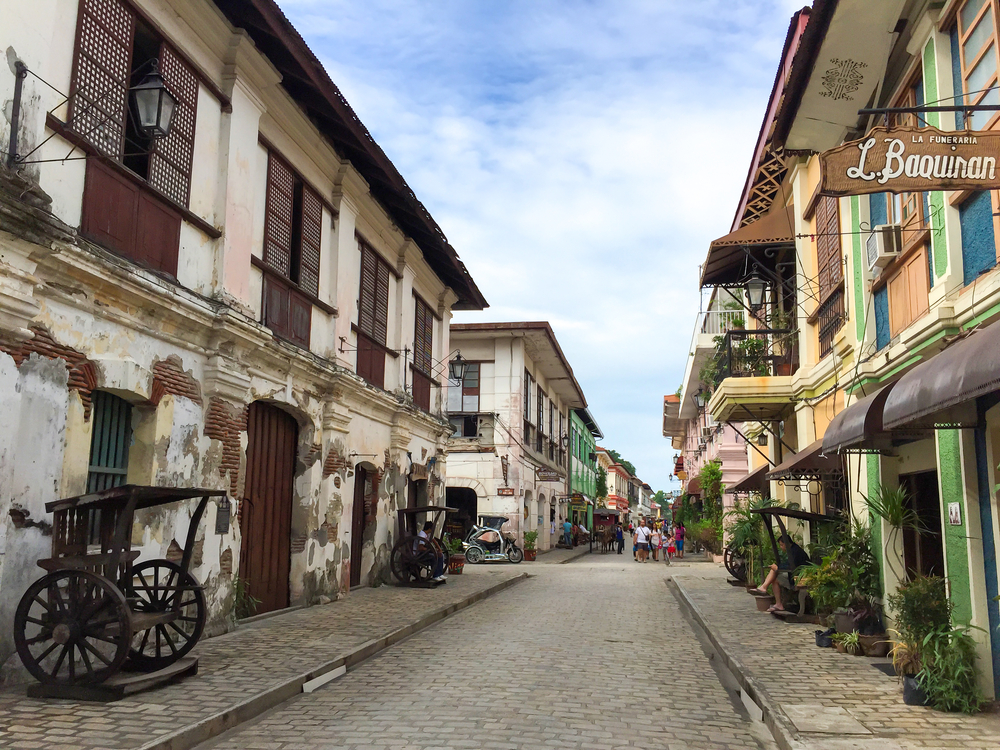 Shopping
With the ground floor of many of the colonial houses now being used as shops, the streets of the Mestizo District become a hive of activity during the day, with traditional goods spilling out onto the streets, and plenty of haggling taking place. The majority of the products that you will see are traditional to the city of Vigan, with everything from antiques to wine to wood crafts to the famous Vigan vinegar.

After Dark
For those who plan their walk for the evening time, you will be able to enjoy the pleasure of experiencing the Mestizo District once the sun goes down. With the cobblestone streets, the lack of traffic, and the traditional lamps that cast spooky shadows on the historic buildings, the Mestizo District takes on even more of an 18th century atmosphere at night. The perfect way to round off your evening walk here is by stopping off at a local restaurant for dinner, such as Café Leona, which is housed in one of the colonial mansions. For those who want to spend the night, you will find that a few of the mansions have been converted into inns, giving you the chance to sleep in a piece of history.

Being closed to traffic and only measuring around 500 meters, walking through the Mestizo District really does make you feel as though you have stepped back in time. With its historic Chinese and Spanish architectural influences, combined with the energetic buzz from enthusiastic shoppers and vendors on the cobblestone streets, the Mestizo District is a part of Vigan that is definitely worth taking the time to explore.