Visit the Grand Mosque in Kuwait

Located in the heart of the city, the Grand Mosque is the largest mosque in Kuwait, stretching out for over 45,000 square metres. For those who are looking to soak up some culture and heritage in the city, this mosque is definitely a must-visit.

The Architecture
While the Grand Mosque may not look that extravagant from the outside, you will no doubt change your mind about this as soon as you enter inside. The architectural style is conventional Islamic, but there are also many Persian elements within the design, such as with the pointed arches and large central dome. The gold leaf that decorates the interior contrasts beautifully with the vibrant blues, while hand-carvings and calligraphy add in an extraordinary amount of detail. Another highlight of the mosque is the dome, as there are four chandeliers that hang from here, while the dome itself has been decorated with the 99 names of God, which then blend into geometric patterns.

The Prayer Halls
At the very heart of the Grand Mosque is the main prayer hall, which is reserved exclusively for male worshippers. With 144 windows dotted around the hall, natural light floods in and really brightens the place up. For female worshippers, there is a separate praying area, while the patio is an area onto which both genders can go. 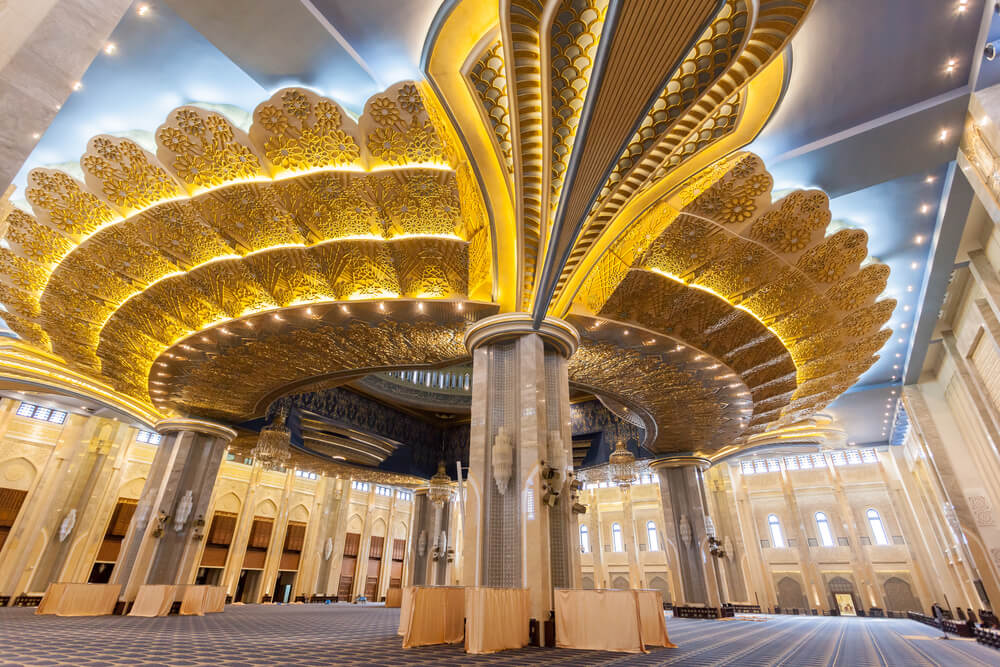 The Amir’s Room
The Amir’s Room is used by the Amir and his guests a couple of times a year, and is well worth checking out. This room is one of the highlights of the mosque, as it features hand-carved gypsum ceilings and symmetrical lines that run across the ceiling and walls.

Tours of the Grand Mosque
The best way to explore the Grand Mosque is by taking one of the daily tours that are offered here. These are offered throughout the day, although you will need to request an English-speaking one. The tours last for about one and a half to two hours each, and will cover everything from the mosque’s architecture to prayer rituals. You will also be able to see the library within the mosque, which is home to Islamic reference books and other religious documents. Do not forget to bring your camera, as you will see a number of outstanding features during the tour.

What to Wear
Since the Grand Mosque is a place of worship, conventional and loose-fitting clothing is essential for your tour. If you are a female, you will also need to have your hair covered, and your shoes will need to be removed for the majority of your visit. For those who arrive at the mosque and are not wearing the appropriate attire, you will be able to borrow something to wear for your visit.

While Kuwait may be home to 800 mosques, it is the Grand Mosque that attracts the most visitors. Not only is it the largest in the city, but it has also been extravagantly designed, with so much attention to detail all around the interior, making it a true cultural icon.