Things to Do in New York City in December

New York sparkles during the holiday season, making this the ideal time of year to pay the city a visit. For those who are trying to plan an itinerary, these are some of the top things to do in New York City in December.

Ice Skating
Ice skating season is in full swing in New York City by December, and this is one of the most iconic winter activities in the city. There are a few different ice rinks to choose from, from the Wollman Rink at Central Park, which is considered to be one of the finest in the world, to the stylish rink at the Rockefeller Center. Of course, the highlight of the rink at the Rockefeller Center is that you will also be able to view the incredible Christmas tree at the Rockefeller Plaza, which weighs around 12 tonnes and glitters with 45,000 LED lights. For those who want more space to skate in, the rink at Bryant Park is one of the biggest in the city, and offers the skyline of Times Square as a backdrop.

Radio City Music Hall and The Rockettes
The Christmas Spectacular at the Radio City Music Hall dates all the way back to 1933, and even if you have caught these shows in previous years, there are always changes that make them worth seeing time and time again. The shows include everything from the Nutcracker to the Nativity, and there are even a few special Rockettes Experiences available, from dance classes to the opportunity to perform live on the Great Stage. 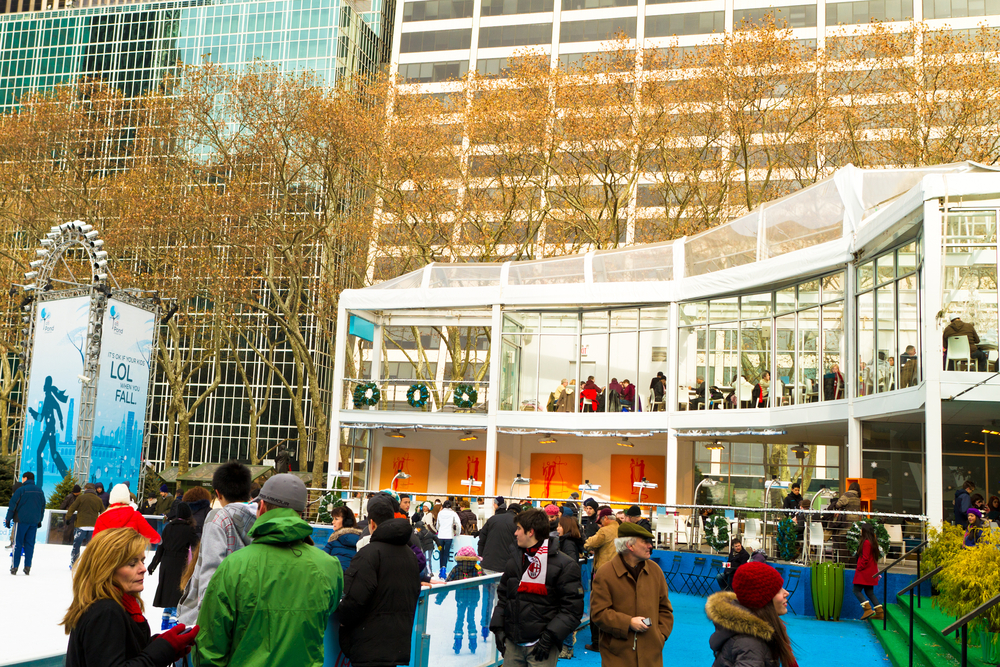 Christmas Markets
New York hosts several Christmas markets during the festive period, with the Winter Village at Bryant Park being one of the most popular. The 125 boutique stalls here surround the ice rink, and sell everything from handmade gifts to the tastiest hot chocolate in the city. The Union Square Holiday Market is also worth checking out, especially if you want to sample some delicious artisan treats, from freshly made truffles to local beer to German bratwurst sausages. You will also find a holiday fair held at the legendary Grand Central Terminal, featuring over 70 stalls selling a range of unique gifts.

Holiday Window Displays
New York City’s holiday window displays are always highly anticipated, especially at Saks Fifth Avenue, where they take inspiration from famous fairy tales when putting together their windows. Other store windows that are worth browsing include Macy’s, Tiffany’s and Henri Bendel, although you are likely to see impressive displays in stores throughout the city. For those that do not want to miss out on any spectacular window displays, there are many walking tours held throughout the city that will take you to see the highlights.

Many would argue that New York City is at its best during the winter, and there are certainly plenty of festive activities to take part in. From ice skating on some of the most famous rinks in the world, to shopping for holiday gifts at the city’s Christmas markets, there is always so much to do in New York City in December.