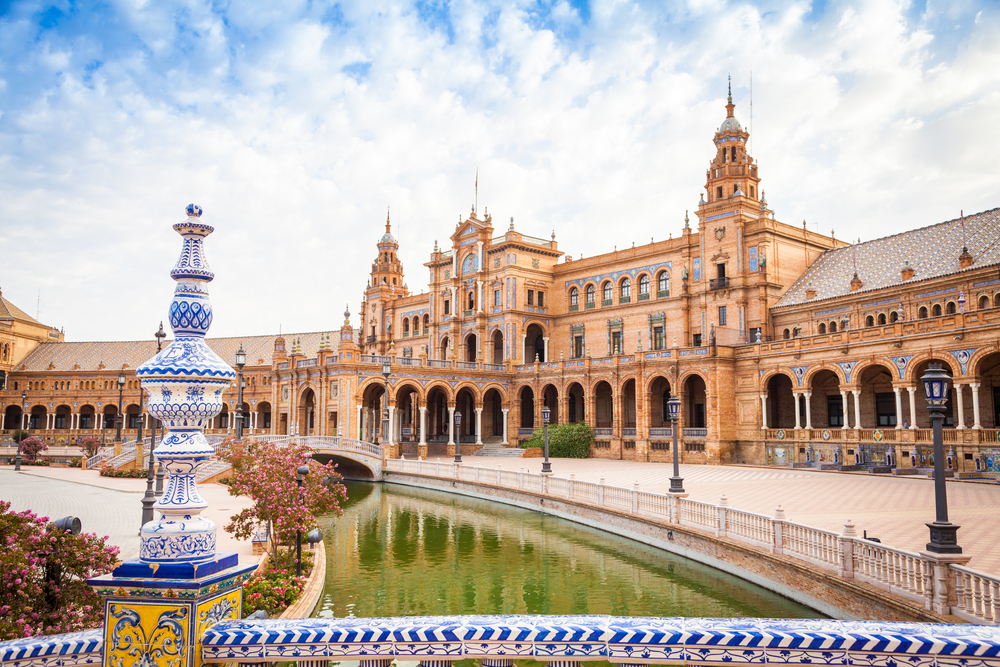 A glorious smorgasbord of local fiestas, sizzling tapas, hillside villages, soaring cathedrals and sun-soaked islands, Spain is an excitingly addictive country, and one that you will be desperate to return to time and time again. Its many varied landscapes and customs are all worth exploring, with each region offering up a unique culture and experience.

Spanish city life is vibrant and cutting edge, with the most popular cities being Barcelona, Madrid, Valencia and Seville. Barcelona boasts many Gaudi buildings, including the truly iconic La Sagrada Familia, Antoni Gaudi’s unfinished cathedral. Madrid, the capital of Spain, is also an art lover’s paradise, with some of the finest museums in the world, as is Bilbao, with its breathtaking Guggenheim Museum. For a more romantic Spanish city, head to Sevilla, the city of flamenco, and also where the tomb of Christopher Columbus lies. All of the major Spanish cities offer unrivaled shopping destinations, featuring both international brands as well as local boutiques. Many global brands, such as Pull & Bear and Massimo Dutti, actually originated in Spain, so you will find flagship stores with cheaper prices.

It is not only the Spanish cities that are worth a visit – the province of Cádiz is where you will find some of the most picturesque white villages and Atlantic beaches, as well as the region of Jerez, which is the birthplace of sherry, while Extremadura, in Mérida, produces some of the best ham in Spain, as well as underrated local wines. Toledo, an ancient Spanish capital, lies just south of Madrid, an ideal location for a day trip, while the north west capital of Asturias, with its fishing villages, bagpipes, Celtic traditions and plenty of local cider, will make you forget that you’re even in Spain.

As fascinating as Spain’s mainland may be, its sun-soaked islands are not to be missed. The Canary Islands, with Fuerteventura’s late night discos and the volcanic forests, with the largest crater in the world, of La Palma, are a popular vacation destination. Minorca has the most beaches of any Spanish island, and is the first place in Spain to see the sun rise, Ibiza is one of the party capitals of the world, while El Hierro offers up rustic villages and wild vegetation – each of the Spanish islands has a truly unique quality about them.

One of Spain’s greatest attractions is its eating and drinking culture, with long, lingering lunches in the sun with a jug of sangria, and late dinners under the stars with glasses of Rioja. The food is usually fantastic, wherever in Spain you go, and tapas is the best way to sample a range of dishes from each region. Although wine tourism is relatively new to Spain, there are many vineyards that you can tour to sample some of the world-famous Spanish wines. Amazing food can easily be one of the highlights of any vacation, and along with Spain’s many beaches, grand cities, pristine islands and authentic villages, there is always going to be something new and exciting to discover. 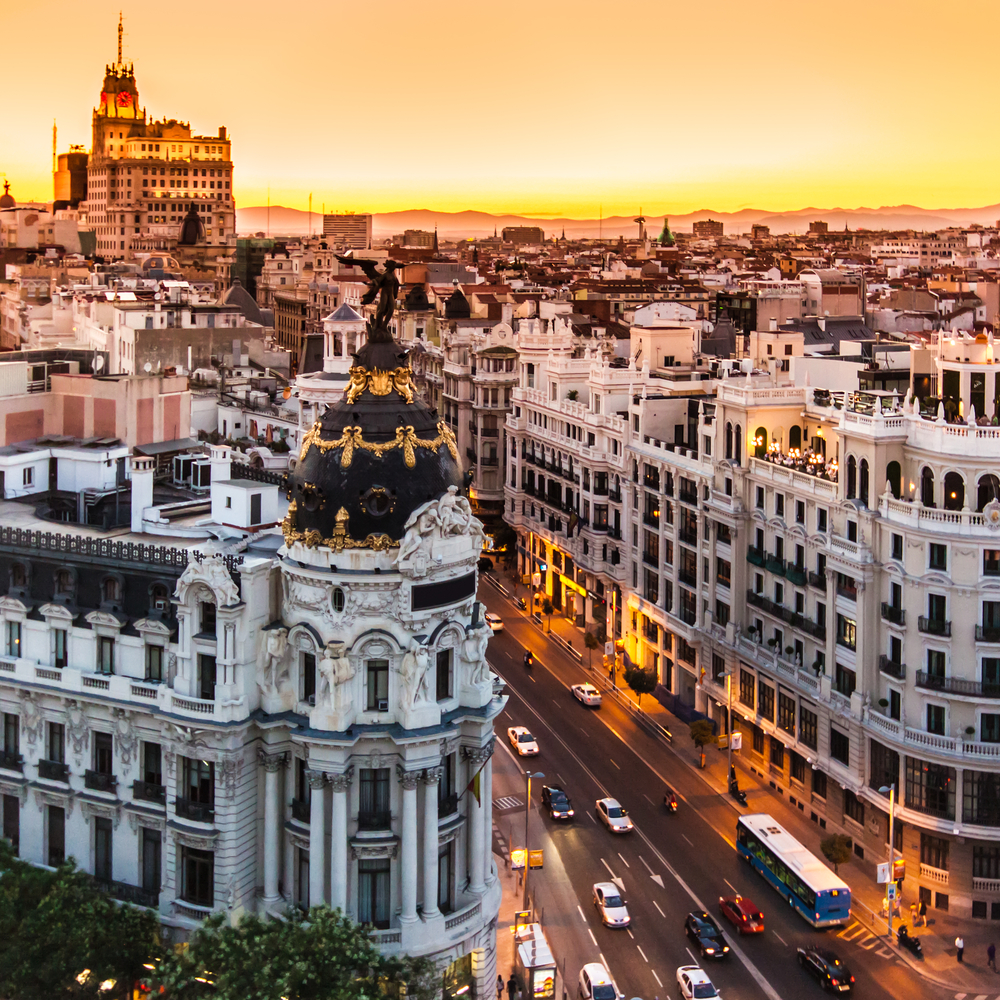 Madrid
The capital of Spain since 1561, Madrid is a modern European city with a rich history and a vibrant zest for life. Madrid’s artistic pedigree is what makes it stand out from other Spanish cities, and art lovers frequently return to soak in the beauty of work by famous Spanish masters, from Picasso to Dali to Goya, at the many world-class museums. Other popular attractions in Madrid include the Palacio Real, also known as the Royal Palace, the Environmental Park, where you can experience a tropical storm, polar temperatures and rivers of molten lava all in one location, and the Parque del Buen Retiro, with its Sunday morning street-side entertainment.

There is plenty of shopping to be done in Madrid, from the upscale shopping areas to bustling Spanish markets to souvenir shops selling many local specialties, from Spanish produce to leather apparel. With the largest number of bars per capita in Europe, Madrid is also a lively night spot, with the nightlife focussed around three main areas; Chueca, which specializes in trendy restaurants and is the area with the most gay bars in Madrid, Calle Huertas, where you will find flamenco clubs and traditional Spanish music, and Malasaña, with its many clubs that are frequented by the younger crowd. Tapas joints all over the city stay open until late, so even if you don’t feel like dancing the night away, you can still relax with some sangria and a selection of tapas, soaking up the Spanish atmosphere all around you.

Barcelona
A charming seaside city, Barcelona, the capital of Catalonia, has an enchanting mix of sun-soaked Mediterranean beaches, modern art museums, buzzing tapas bars and ultra-chic shops. The second largest city in Spain, Barcelona’s most iconic attractions are La Sagrada Familia, Antonio Gaudi’s unfinished cathedral, the winding labyrinth-like streets of the city’s Gothic quarter, the world famous wide pedestrian boulevard La Rambla, and the Picasso Museum. Another main attraction to Barcelona is its vibrant way of life, with a complex gastronomic identity putting a twist on regional classics. Other than Japanese restaurants, you won’t find that many international offerings, but this shouldn’t worry you, as the local cuisine will more than satisfy any cravings.

In addition to the sightseeing, Barcelona offers some excellent outdoor activities. With its excellent weather and stunning beaches, there are plenty of water sport opportunities, from sailing to surfing to jet skiing, and equipment rental establishments can be found throughout the city. The more experienced of you will want to head to the beaches towards the north of Barcelona, such as Poble Nou and El Masnou, as here you can enjoy smaller crowds and bigger waves. Barcelona is also popular with golfers, and has courses nestled in the Pyrenees as well as sprawled along the coastline. When it comes time to relax and let loose, Barcelona has some of the best night spots in Europe, with many venues only getting started well after midnight. Whether you’re after history, culture, authentic food, or outdoor activities, Barcelona will not disappoint. 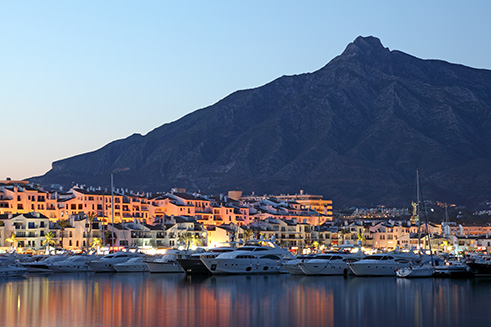 Marbella
Marbella is located south of Madrid, right on the coast. In the stylish, sunny Marbella, a bit of bygone Moorish style melds with contemporary resort amenities. The Marbella Old Quarter, a charming Andalusian historic area, is the top tourist attraction of this sunlit city. It is best explored by wandering around the cobbled streets, looking into old churches, drifting down narrow lanes to discover little shops and a large variety of dining options. Avenida del Mar is also a lovely historic area to roam around. The street is paved with ivory marble and has bronze statues by Eduardo Soriano and Salvador Dali, two notable Spanish artists. When you get tired of walking you will find many dinning choices including cafes, restaurants and bars. At the bottom of the avenue is Venus Beach aka Playa el Fuerte, a relaxing sandy beach to unwind at. Iglesia Mayor de la Encarnacion, a church under the patronage of St. Mary, has become a monumental symbol of the city of Marbella. A Sol Mayor Organ sits inside the main altar, and is considered to be one of the most important one to be built in Spain. If you are so inclined, Marbella is also home to many golf courses with Marbella Club Gold Resort being the most popular. Marbella is a jet setters mecca, attracting some of the most wealthy people in the world to its sun drenched shores. The city is known for its beautiful beaches: Bajadilla Beach, Fontanilla Beach and Puerto Banús and exhilarating night life. It also boosts some excellent shopping options. At La Cañada Shopping Center you will find some choice selections, among them an OROGOLD store. After the relaxing experience at OROGOLD end your day with an authentic local dish of cold almond soup, ajoblanco, and one of the areas flavorful dessert wines.