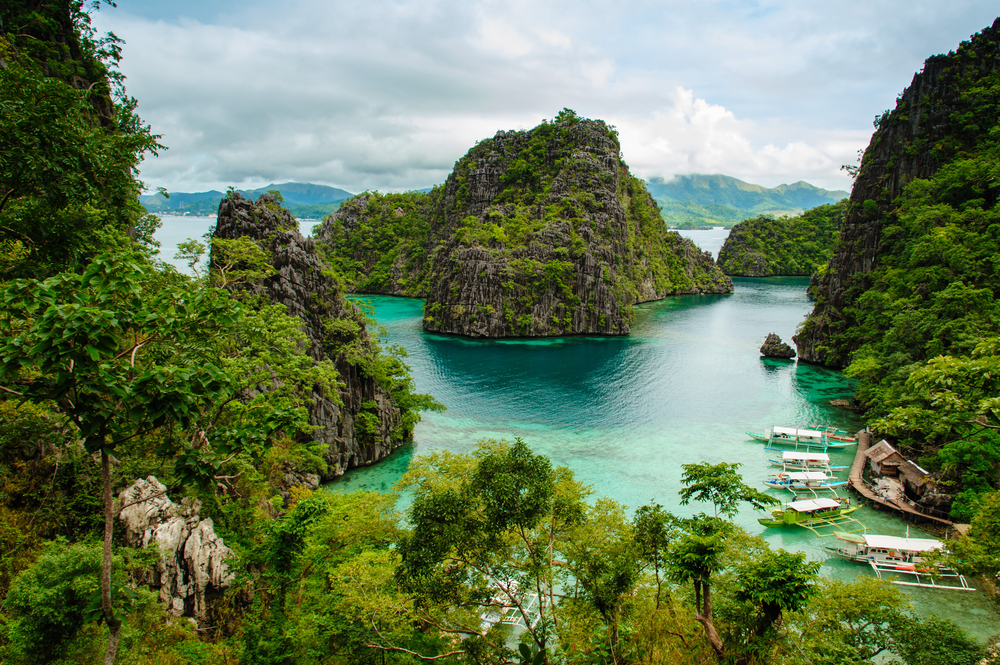 Dubbed the ‘pearl of the Orient’ by the Spanish, the Philippines is comprised of over 7000 different islands, guaranteeing that it can offer something for everyone. The Philippines was ruled by the Spanish for 350 years, which has given it a strong Catholic backbone, setting it apart from other Asian countries. The country has also been shaped by a steady stream of other cultures, from Malay to American to Islamic, and this tantalizing mix is clearly evident wherever you go. Although the Philippines may struggle to overcome its image of poverty and corruption, don’t believe the stereotypes, as the country is culturally complex and naturally spectacular.

Manila is the chaotic capital of the Philippines, and is a common starting point for travelers who want to see more of the country. The most popular historic landmark in Manila is Intramuros, an old Spanish walled city, while the island of Corregior in Manila Bay, with its guns and ruins left over from the war, is also worth a visit. Although the majority of people that visit the country are looking for more than a city destination, the Philippines still has a number of unique cities, each known for something quite different, from Bacolod, a must visit for any foodies, to the shopping mecca of Cebu to the array of cultural venues in Makati City.

When it comes to shopping, every urban area has at least one mall, something which was influenced by the US. However, there are also still many traditional markets, both indoor and outdoor, for visitors to explore. For those of you who are new to Filipino food, it is significantly different from that of other Asian countries, and doesn’t use as many bold flavors or spices. Rice is served with every meal, and fish and pork are common forms of protein. If you haven’t taken a liking to the local cuisine, don’t worry, as there are plenty of international restaurants to choose from.

With so many different islands, it is no surprise that the Philippines is an extremely popular beach destination. The coastal town of El Nido, with over 50 different species of coral present in its crystal clear waters, is extremely popular with divers, as are the Calamian Islands, as they have an amazing collection of wrecks left over from the war. The Siargao Islands are popular with surfers, and have waves to cater to every ability, while White Beach on Boracay is one of the most popular vacation destinations in the country, with plenty of resorts and facilities to cater to tourists.

Those of you who want to explore the Philippines’ natural beauty beyond its picture-perfect beaches will find plenty to keep you busy. The Banaue Rice Terraces, a UNESCO World Heritage Site, were carved into the landscape over 2000 years ago by mountain tribes who only had the most basic of tools, and are commonly referred to as the eighth wonder of the world. Mount Apo is the highest peak in the country, popular with experienced trekkers, and is also home to one of Asia’s longest ziplines. Bohol Island is often frequented by nature lovers, as here you can visit the home of the world’s smallest monkey, the tarsier. With areas that are so richly abundant in natural beauty, and traditions and rituals that have been influenced by such a variety of cultures, the islands of the Philippines will continue to captivate travelers for generations to come. 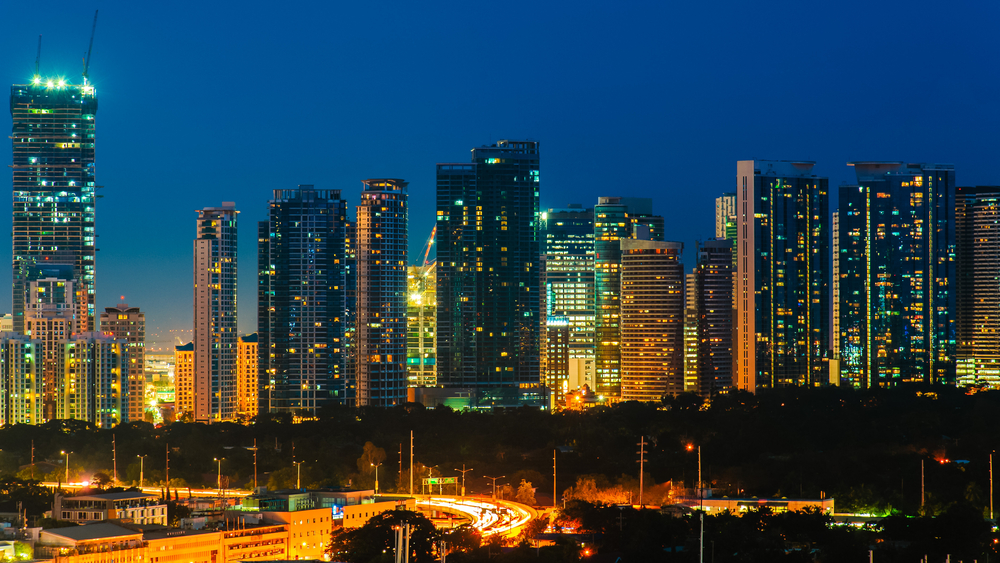 Manila
A high-speed, chaotic metropolis, Manila is everything that you would expect from a true Asian megacity. The capital of the Philippines, Metro Manila is actually made up of 17 different cities and municipalities, and its 34 million residents make it one of the most populated capitals in the world. Its history has been shaped by a slew of different cultures, and there is no better way to experience this than by a visit to some of Manila’s museums, from the National Museum of the Philippines to the National Museum of the Filipino People to the Ayala Museum. The San Agustin Church and Museum, one of the oldest baroque churches in the country, is also worth a visit for those interested in history or architecture. Another extremely popular historic attraction in Manila is the old Spanish colonial quarter, Intramuros, a walled city that was lovingly restored after the war.

Of course, being a busy, buzzing city means that Manila also has plenty of non-cultural options to keep you entertained. The SM Mall of Asia, with the largest IMAX screen on the continent, is the largest shopping mall in the country, while the Oceanarium boasts a captivating 25m underwater tunnel. Those who want some time with nature should head to Rizal Park, with its several themed gardens, an orchidarium and a planetarium. There are plenty of restaurants throughout the city, and locals absolutely love a good meal out, so you will never be short of somewhere to eat. Seafood is loved throughout Manila, and makes its way onto most menus, alongside other local specialities, such as lechon, which is roast crackling pig. Prices, even at extravagant fine dining restaurants, are still much lower than at restaurants around the world, making it an ideal city to treat yourself to a gourmet meal, or two! Although some may find Manila slightly too frenetic for their tastes, those of you who love fast-paced cities that are bursting with life 24 hours a day will feel right at home in Manila. 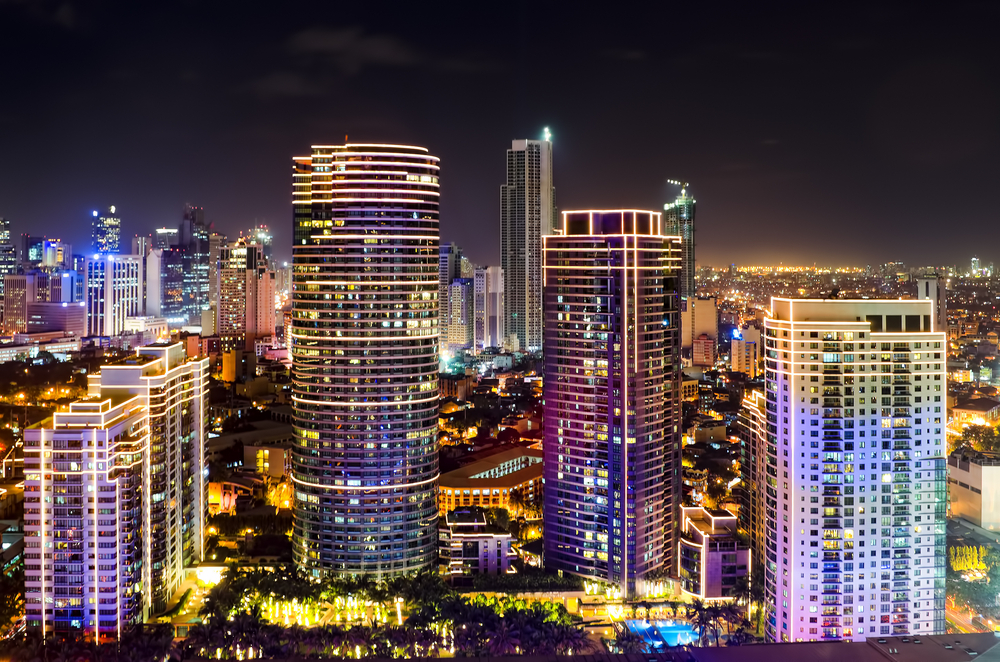 Makati City
Situated 5 km. to the east of Manila Bay, Makati City, part of the larger Metro Manila region, has quickly developed into the capital’s financial hub, complete with headquarters for major international businesses alongside upscale malls, plush hotels and an array of chain restaurants. Makati is known as one of the premier shopping destinations in the country, and has a whole host of different shopping centers and malls, from the Greenbelt Mall to the Glorietta Mall, which has a sheltered walkway to take people to its neighboring mall, SM Makati. Once the weekend arrives, the city becomes significantly more deserted, making it an ideal time to visit some of Makati’s markets, with the Salcedo Community Market being particularly popular.

Although Makati City may be focussed on finance and business, it is also quite the cultural hub, and has some of the country’s best museums. The Ayala and Yuchengco Museums are two of the largest in the Philippines, while the Manila Contemporary showcases some great art collections. The Silverlens Gallery is one that budding photographers should stop at, and The Collective, on Malugay Street, is a converted warehouse that is now home to a buzzing creative space, featuring art labels, one-of-a-kind boutiques, sustainable food and home décor stores. When it comes to eating options, Makati City has some of the best restaurants in the country, and is able to cater to whatever you may be craving, from a finger-licking street snack to a steaming  bowl of comfort food to an elegant, fine dining meal. Many are impressed by the way in which Makati City manages to set itself apart from the rest of Manila, and it is definitely an area worth visiting when you are next in the country’s capital.

Newport City
Enchanting views of the Villamor Championship Golf Course aside, this 25-hectare extravaganza was born to please. Home to the popular Residential Resort, Newport City introduces Philippines to luxury and resort living. The city consists of a number of low-rise buildings, a shopping mall, a business park, a residential center, a cyberpark, and a themed entertainment center, all of which are surrounded by a lush green park. It is home to popular hotel properties from Maxims and Marriott, but its biggest charm is Resorts World Manila, the leisure capital of the Philippines.

Resorts World Manila presents locals and tourists with international themed restaurants, an upscale shopping mall, a fascinating gaming center and a state-of-the-art performance venue. No wonder, Newport City has already begun to attract thousands of travelers from all over the planet. To make your stay in Newport City even more special, OROGOLD Cosmetics just opened up our latest store here. Visit the OROGOLD Newport Store for special treatments and services that are bound to pamper your skin towards new-found silky smooth feelings. Try out our products and collections and ask our in-house experts to customize an OROGOLD routine just for you.

Discover the exciting, sleepless city of Mandaluyong, immediately east of Manila. With high-rise condominiums, office skyscrapers, commercial centers, and five-star hotels, Mandaluyong is known as the “Tiger City of the Philippines.” Well-known business and commercial centers call Mandaluyong their home, including the Ortigas Center, Pasig, Banco De Oro, and TV5.

For history and art buffs, the Lopez Museum and Museo Ng Makati are both must-visits for a little exploration into the cultural heritage of the Philippines. Those who prefer a bit of green in concrete jungles will find reprieve in Salcedo Park and the Ayala Triangle Gardens. When the sun sets and you need a bit of nosh, head over to the upscale HEAT, which offers an excellent buffet-style dining experience. Don’t forget to shop while you’re in the city — Mandaluyong offers some of Philippines’ most extensive and sophisticated malls, including the Shangri-La Plaza, which boasts over 100 international and local stores, featuring everything from fashion and jewelry, to electronic gadgets and groceries.